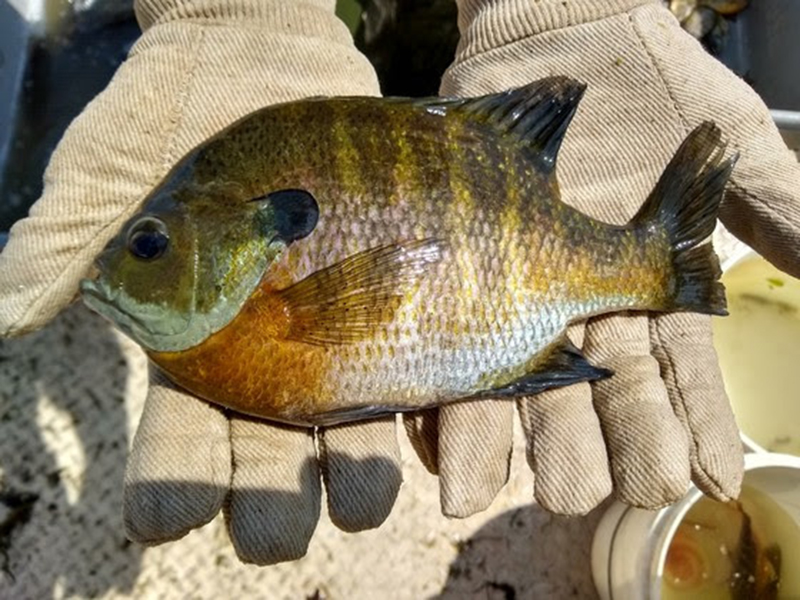 Releasing large male bluegills and other sunfish is the best way to preserve size quality and prevent stunted populations. As a general rule, the Minnesota Department of Natural Resources recommends sunfish larger than 8 to 9 inches are good to release. - Provided

Minnesota anglers harvest around 16 million sunfish each year, making them the state’s most harvested fish. To protect big sunfish and avoid stunted populations of sunfish, the Minnesota Department of Natural Resources is encouraging anglers to release large sunfish, and keep smaller fish for eating.

Females will select a male, lay eggs, and leave them for the male to protect and fan with his fins. These nest-building male sunfish play an important role in repopulation with the largest sunfish often getting the best spawning sites.

When anglers keep only the largest sunfish, which are usually males guarding nests, the remaining small males don’t need to compete with larger males to spawn. Instead of growing, they devote their energy to spawning at younger ages and smaller sizes.

Spawning sunfish are particularly prone to over harvest because they are very aggressive while defending a nest. Anglers can help by releasing spawning sunfish, especially large, nesting males. Released fish have a high survival rate and will typically return to their nests to complete the spawning cycle.

Minnesota angler attitude surveys between 1987 and 2017 found that anglers were generally satisfied with the number of sunfish they caught, but were often dissatisfied with fish size.

“To maintain a high quality fishery, it’s important that anglers, guides and resort owners, all understand the important role these large nesting fish play, and that we all work together to exercise a conservation ethic that ensures these fish thrive,” said Grand Rapids area fisheries supervisor Dave Weitzel.

Protecting larger spawning sunfish is supported by a study of the Fuller Tackle Contest in the Park Rapids area. The study found that until 1953, mean weight of entered bluegills fluctuated around 1.3 pounds; after 1953, mean weight declined. The change in fish weight coincides well with the 1954 regulation change that allowed for year around sunfish angling, and no longer protected the spawning season.

Since the 1954 regulation change, sunfish numbers have generally increased in DNR lake surveys, suggesting an overall increase in sunfish densities — a trend often linked to a decline in size.

More information about sunfish biology and management can be found at mndnr.gov/fish/sunfish.