New laws on the books 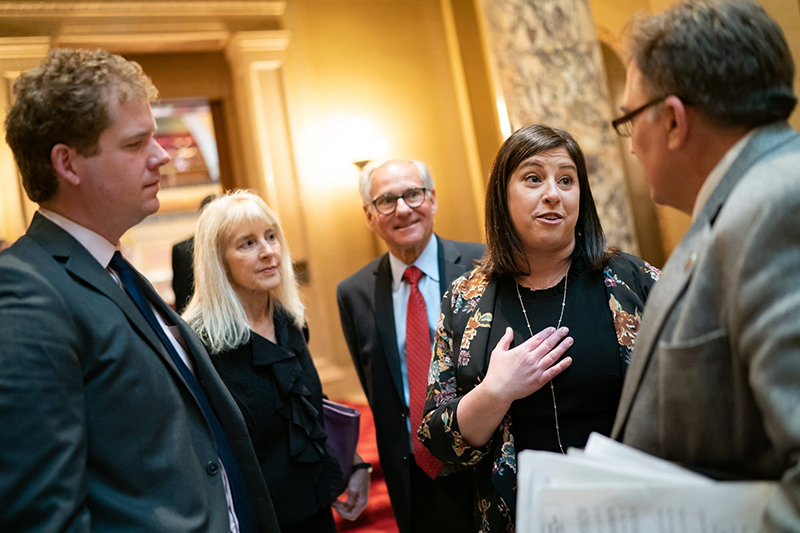 Jenny Teeson, who testified in front of various committees about being drugged and raped by her ex-husband, thanked Sen. John Hoffman, D-Champlin, right, and Rep. Zack Stephenson, D-Coon Rapids, outside the Senate where they took up the “marital rape” bill in April. Behind her are her parents. - Glen Stubbe via Star Tribune file via MPR News

MINNEAPOLIS — Starting July 1, Minnesotans who rape their spouses can be charged with sexual assault, wage theft becomes a crime and drug manufacturers will help shoulder the state’s costs of responding to the opioid epidemic.

The Legislature repealed a so-called marital rape exception that had prevented prosecutors from filing criminal sexual conduct charges against people accused of sexually assaulting their spouses.

The impetus came from Jenny Teeson, of Andover, who went public after prosecutors dropped a felony charge against her now ex-husband, who drugged her and made a video of himself raping her while she was unconscious. He served just 30 days in jail for invasion of privacy.

“No longer will this antiquated and shameful law be on our books,” Gov. Tim Walz said as he signed the bill into law with Teeson looking on.

Minnesota will have what sponsors said is the country’s toughest wage theft law. It comes down hard on employers who cheat workers by making it a felony punishable by up to five years in prison and a $10,000 fine. An estimated 39,000 Minnesotans annually are victims of wage theft in some form.

Drug manufacturers and distributors will now have to pay much higher registration fees, which will raise around $21 million annually to help fight the opioid epidemic in Minnesota.

Part of the money will go for grants to fund prevention strategies to reduce opioid deaths and overdoses. Much of the rest will help reimburse counties for their growing child protection costs resulting from families hurt by opioids.

With some exceptions, the new law also limits initial prescriptions of opiates for acute pain from trauma or surgery to a seven-day supply for adults.

Minnesota school districts will get a 2% boost in state aid in each year of the two-year budget. The main education funding bill also included a $91 million increase in special education aid to help reduce the rising gap between their costs and the state and federal aid earmarked for special education.

The higher education funding bill contained enough money to limit tuition increases to 2% in the University of Minnesota system and 3% in the separate Minnesota State colleges and universities system.

New funding kicks in July 1 that will allow the state to hire 78 additional corrections officers. That’s in addition to filling around 50 vacancies in the prison system statewide. Recruiting efforts are already underway. Lawmakers authorized the new positions following the on-duty deaths of two guards and other assaults.

Cash aid under the Minnesota Family Investment Program will rise by $100 per month starting in February, the program’s first raise since it launched 33 years ago. More than 30,000 of Minnesota’s neediest families will benefit eventually from the bump that’s part of the new budget. Among the supporters was Lt. Gov. Peggy Flanagan, whose family was on the program when she was a child.

Voters who participate in the Super Tuesday presidential primary in Minnesota will get a little more privacy. But only a little.

When they go to the polls March 3, 2020, voters must cast either a Democratic or GOP ballot. The original state law returning presidential primaries to Minnesota made lists showing the party choice of voters publicly available to anyone. Those lists would have been highly valuable to parties, candidates, fundraisers and interest groups. Now those lists will be disclosed only to the major political parties, which can still use them for fundraising and voter outreach.