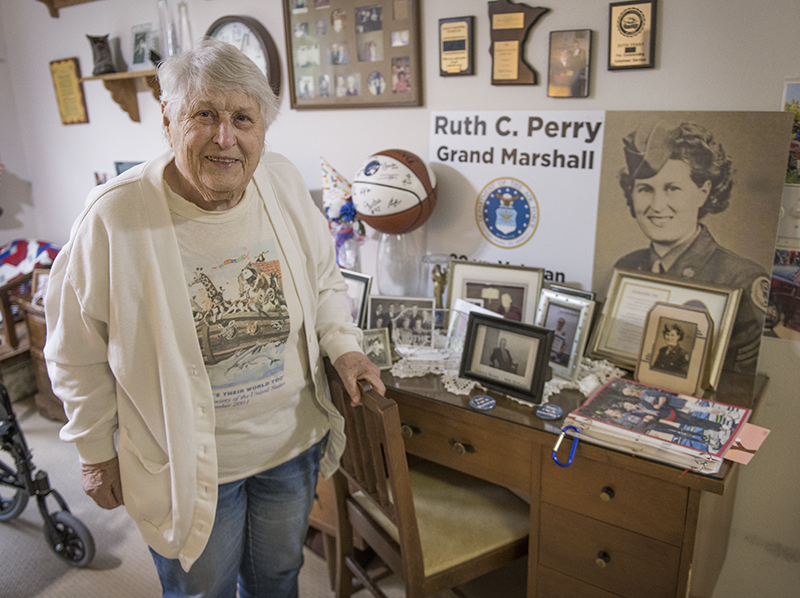 Ruth Perry has a wall of accolades and memories in her home. - Colleen Harrison/Albert Lea Tribune

Originally from Northwood, Perry was growing up during World War II when her cousin, serving in the Navy, died in the attack on Pearl Harbor. His passing and the service of other family members were part of what led Perry to enlist in the Army Air Corps in 1944, which would become the Air Force a few years later.

“I loved our country and I wanted to serve,” she said. “That was more it than anything — love of my country and the flag.”

Twenty years old at the time of her enlistment, it took Perry’s mother three months to sign for her daughter to be able to do so.

“The only reason I finally got her was because my brother was two years younger than me and she signed for him,” Perry said.

Perry’s five brothers — four of whom also served in the military — were supportive of her decision, often protecting her when they’d go out around home when Perry would have to wear her military uniform.

“My brothers, you didn’t say anything about a woman in the service to them or you’d have a fight on your hands,” she said.

Perry’s father was a World War I Army veteran, but was divorced from her mother and estranged from the family. Perry wasn’t able to discuss serving with him.

Perry, who will turn 95 in August, had a military career spanning over 20 years — during the Korean War and the early stages of the Vietnam War.

Her first posting was in Spokane, Washington, where Perry ran a post office. Perry quickly gained a reputation of being outspoken. She remembered a time getting a detail of having to clean up pine cones because she forgot to wear her hat — “I still hate hats,” she said — or would miss saluting an officer because they blended in too much with other soldiers on the base due to what they were wearing.

Another time, one of Perry’s brothers was wounded while serving in Korea. Her mother wasn’t able to get much information via telegram, and asked Perry to find out what she could. Perry remembered going to the American Red Cross to find out more information.

“I said … ‘Can you find out for me how badly hurt my brother is? He’s in a hospital in Seoul and they didn’t tell my mother anything.’ He says, ‘If you want to know anything, write your home chapter,’” Perry recalled. “Well, that didn’t go over very good with me, and I said, ‘Don’t worry about it, I’ll find out by myself and I’ll know sooner than that.’” 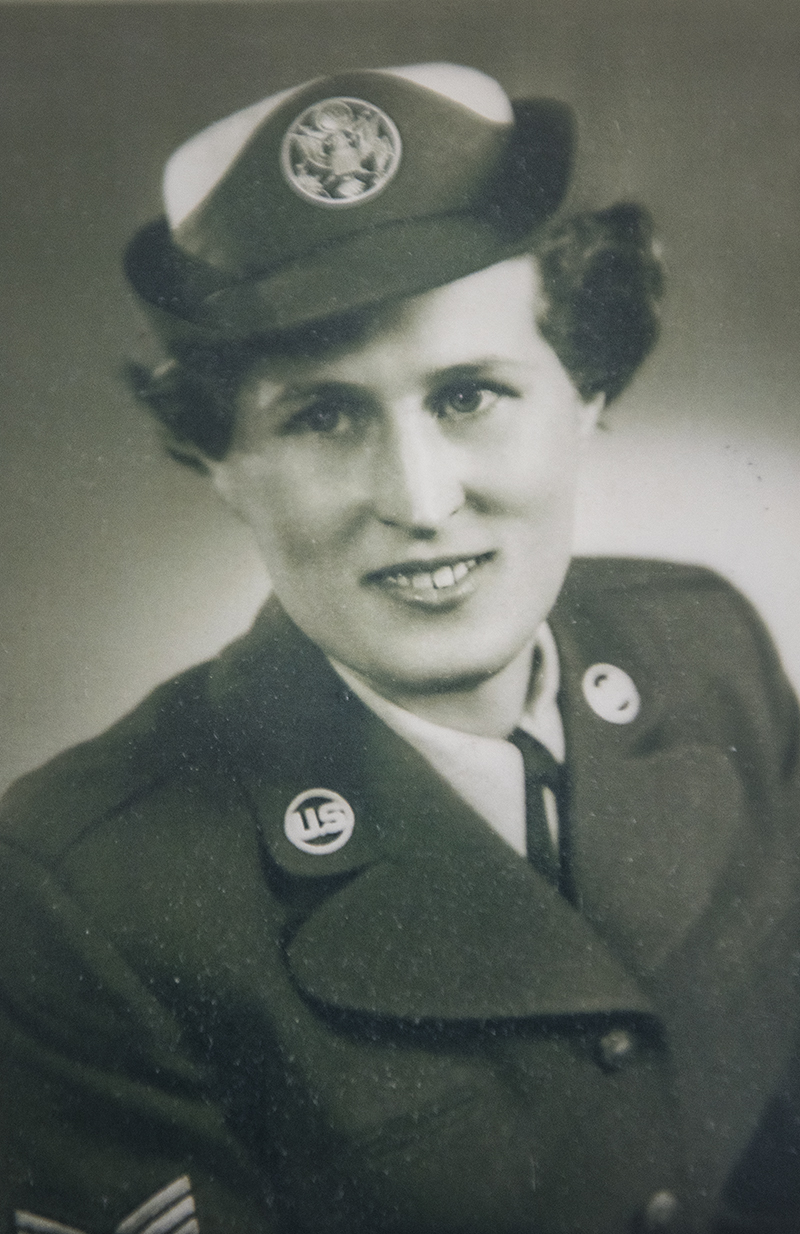 The next day, Perry found out her brother wasn’t critically injured and was able to call her mother and relay the information.

She served in Germany during both the Korean and Vietnam wars, and had cousins serving at the same time during the Vietnam War. Perry’s father died while she was serving in Germany, but since her parents were divorced and she had primarily lived with her mother, she wasn’t able to come back for the funeral.

After serving in Germany, Perry came back to the United States and was posted in Colorado Springs, Colorado. She was the only sergeant there with all the airmen, where she said sergeants weren’t liked very much.

Perry would then go into recruiting to get closer to home, where she managed all female recruits in Minnesota and North Dakota and part of Wisconsin. Male recruiters usually only had five counties to cover, she said. Perry was in recruiting for about eight years. Following being in recruiting, Perry typed special orders for the rest of her military service, taking her to both Louisiana and Illinois.

“Well, I found the military just like anything else; it’s what you make your duty,” she said. “You can enjoy it, enjoy the work, or you can be bored or hate it. I enjoyed it.”

After her military service, Perry went to work for the Social Security Administration. Perry retired from there after 20 years and then moved to Albert Lea looking to get into more volunteer work. She wanted to get into recruiting volunteers.

“I saw the need for recruiting when I was in the service,” she said. “We always needed help and couldn’t get it.”

Through her volunteerism, Perry helped recruit volunteers at St. John’s Lutheran Community, answered phones at The Albert Lea Art Center, shopped for the activities department at Good Samaritan Society of Albert Lea, volunteered through Community Action, disbursed surplus food from Mrs. Gerry’s Kitchen to other places that could use it, delivered to the Senior Center and served as the chaplain of the Albert Lea American Legion, among other volunteer work.

A lifetime member of the Legion and Veterans of Foreign Wars, Perry hasn’t been as active lately due to no longer driving. A member of Women Veterans of Freeborn County, Perry still attends those meetings as other members drive her to and from the meetings. She still tries to attend local veteran funerals when possible.

Perry has previously been named the Woman Veteran of the Year for Minnesota, as well as Legionnaire of the Year. She was recently honored at a Minnesota Lynx game looking to honor women for Military Appreciation Night.

“I learned respect of people more than anything,” she said of her time serving, both in the military and through volunteering.

“I’m proud of my awards, but I think every one of the girls … all of the women vets deserve an award.”

Interesting fact: Perry’s prized possession is a basketball signed by the Minnesota Lynx during her time being honored for Military Appreciation Night