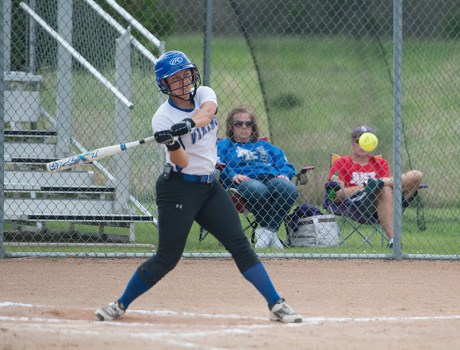 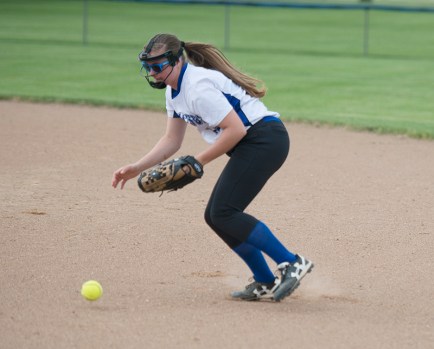 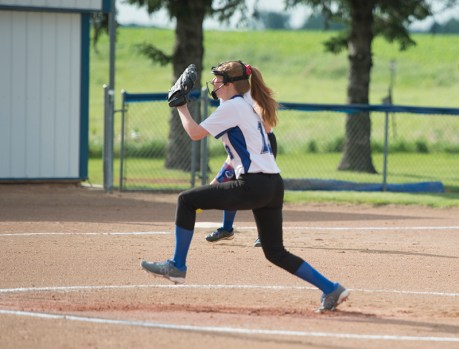 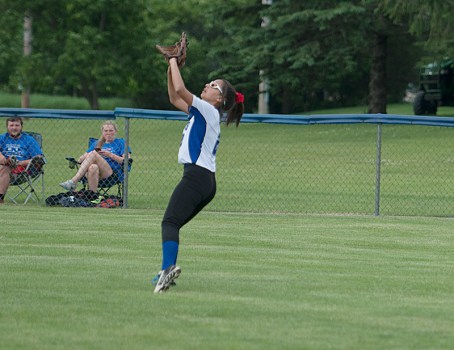 Senior Jacie Davis sets up under a pop fly Friday night to make the catch and record the out. - Tyler Julson/Albert Lea Tribune

The Vikings made the plays they needed to late in the game to narrowly edge out the Warhawks, 4-3.

Starting the game in the field, the Vikings let up one run in the first after a runner reached base on an error. The base runner moved along to third after two steals and eventually crossed the plate on a sacrifice fly to right field. Sophomore pitcher Kayla Senne then ended the inning with two straight strikeouts.

The Vikings tied the game back at one in the bottom of the inning. Senne was the first to reach base with a single, but was thrown out at second attempting to steal. Three straight singles from seniors Laura Hopperstad, Allie Carmen and Molly Hunchis led to the score.

A quick one-two-three inning in the top of the second put Northwood-Kensett right back at the plate. Senne added another two strikeouts to her total and junior Kennedy Eskildsen snagged a hard hit ball to save a base runner.

The Vikings failed to capitalize on the Warhawks’ scoreless inning, only putting one runner on board in the inning — junior Alexis Halbach with a single.

A throwing error in an attempt to catch a stealing runner cost the Vikings another run in the third, but they ended the inning before any more damage could be done.

The trio of Hopperstad, Carmen and Hunchis came up big again in the bottom of the third inning, as Hopperstad and Carmen reached on singles and Hunchis picked up her second RBI of the game with a sacrifice fly to center. After tying the game at two, the Vikings missed an opportunity with two base runners on as a strikeout ended the inning.

Senne continued her dominance in the circle with two more strikeouts in the fourth and the third out coming on a steal attempt. However, Northwood-Kensett failed to take the lead in the bottom after getting two hitters on base.

With just three innings to play, the game remained tied at 2-2. Another strong performance from the Vikings defense put them at the plate with an opportunity to take their first lead of the game.

The Vikings did not come away empty handed this time. Carmen led the inning off with a walk, before sophomore Hailee Varner came in to run for her. Eskildsen advanced Varner to third on a single and junior Jaela Parks hit her in on a sacrifice hit.

Northwood-Kensett took a 3-2 lead into the top of the sixth inning, where West Fork was again held scoreless.

The Vikings failed to pick up an insurance run in the bottom of the inning and it came back to haunt them as the Warhawks tied the score and extended the game an extra half inning.

Carmen, Eskildsen and Parks each walked to start the inning, loading the bases. However, a fielder’s choice at home plate and a pop fly ended the inning with the score still at 3-3.

In extra innings, the Warhawks failed to score and opened the door, once again, for the Vikings to close the game. Starting at the top of the order, the Vikings didn’t take long to end the game. Junior Peyton Pangburn led off with a single and then came all the way around to score on a throwing error on the next at bat.

The Vikings climb to 8-6 on the season and will play again Saturday at a tournament in West Hancock.