Al Batt: Monarchs that migrate are the ones born in mid-August or later 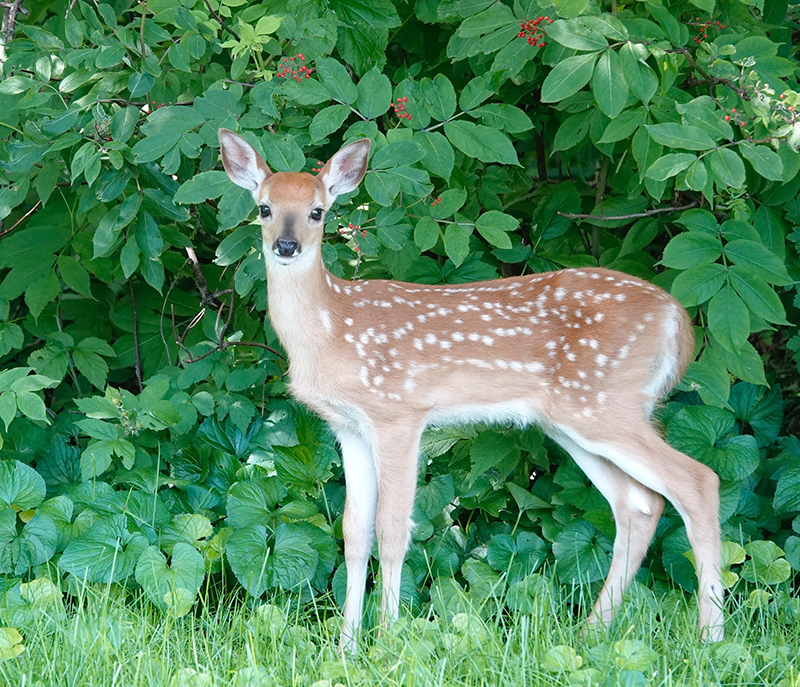 Oh, deer! The average number of spots on a white-tailed deer fawn’s coat ranges from 272 to 342. Al Batt/Albert Lea Tribune

“Everything is nearly copacetic. I’m trying to eat a varied diet. That’s not difficult, thanks to there being over 30 flavors of Pop-Tarts. My sister Cruella fixed me some kind of tofu and kale colon cleanse. That’s how I learned why people take photos of their food. I’d much rather have a picture of Cruella’s cooking than to eat it.”

An inquisitive fawn walked close to me in the yard. The little deer had likely never seen anything like me before.

I saw fledged starlings, pale brown to the point of appearing gray. I think starlings are beautiful. An eye can find beauty in most things. I visited with Lyanda Lynn Haupt, author of “Mozart’s Starling.” Her book explores the remarkable bond between bird and human. Lyanda has a pet starling, just as Mozart did. Lyanda’s bird is named Carmen, from the Latin word for song. Starlings are amazing mimics.

Stable flies attacked my ankles. They resemble house flies, but have checkerboard markings on the abdomen and bayonet-like mouthparts used to pierce skin and suck blood. They’re about 1/4-inch long and are sometimes called dog flies because of an appetite for canine blood. Their bites (both sexes bite) cause cattle to stamp their feet. Stable flies breed in moist, decaying organic matter.

The spider wasn’t fishing for compliments

Joel Eastvold sent a photo of a spider and asked for identification. It was a fishing spider, brown and tan in color. This is a big spider with a 3.5-inch legspan. They look bigger. They are called fishing spiders because they’re often found near shallow pools of water where they fish for tadpoles, small fish and aquatic insects. They are allowed to fish without a license. Fishing spiders have the ability to dive into and to walk on water. They don’t build a web for hunting, but they do make a nursery web. These shy spiders can bite if threatened. I’ve been told the bite is equivalent to a bee sting.

Stan Fitz of Rockford, Iowa, asked how to stop a cardinal from pecking at a window. Cardinals have jobs. Bird seed doesn’t pay the bills, so the redbirds punch in each day by leaving an imprint on a window. Many cardinals have found gainful employment as promoters of Windex usage. If you take a handsome, lovesick bird and add a taunting window showing reflected images of another handsome, lovesick bird, you have a recipe for disaster — or at least for a dirty window. It isn’t self-loathing that causes this behavior. A cardinal fights with a window in order to defend its territory. It sees its reflection in a window or a mirror and hits it like a bumper car gone berserk. The bird is unable to differentiate between a real bird and an image of itself. One fought with the baby moon hubcaps on my 1959 Rambler. Nothing makes a 1959 Rambler a muscle car like equipping it with baby moon hubcaps. This battling with windows may persist. If you place something over the outside of the window, this breaks the reflection, but the bird may move on to the next window. If a bird looks hard enough for a fight, it will find one. The window covering could be plastic cling or cardboard. The window could be soaped or ribbons could hang over it. This will make Martha Stewart shudder. Covering the inside of the window often enhances the image. A friend told me that he placed a small mirror near the cardinal’s preferred feeder. The redbird fought with that mirror and ignored the house windows. You could try intervention, counseling or enrolling the cardinal in an anger-management class, but patience is the best solution. Sooner or later, the fighting stops. Some studies found that cardinals spend the entire year with the same partner. Saying they mate for life brings to mind thoughts of a feathered Jessica Tandy and a vivid red Hume Cronyn sharing sunflower seeds at the feeder — but there aren’t many long-lasting relationships among cardinals, because the life expectancy of a cardinal is short. This means any cardinal that hangs in there for a few years could have a wedding album filled with photos of varied mates. Oh, Tandy and Cronyn were actors who were married to each other for over 50 years. Believe it or not.

“What generation of butterflies fly south?” The monarch butterflies that emerge in the middle of August or later are those that migrate. They could live 8 to 9 months.

“Time engraves our faces with all the tears we have not shed.” — Natalie Clifford Barney

“There is no great invention, from fire to flying, which has not been hailed as an insult to some god.” — J.B.S. Haldane