Update: Detainee who walked out of jail is back in custody

Freeborn County Sheriff Kurt Freitag said the detainee who reportedly walked out of the Freeborn County jail on Monday has been taken back into custody. 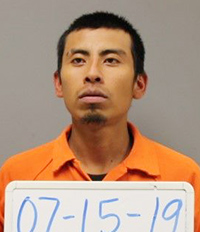 According to a news release, U.S. ICE officers tried to pull over Nava-Urioste, who was found driving a stolen 2013 Toyota Camry in St. Paul, but he refused to pull over and fled at a high rate of speed.

The pursuit ended on a dead-end road where he fled on foot and was later apprehended by the officers.

The Freeborn County Sheriff’s Office and U.S. Immigration and Customs Enforcement are looking for a detainee who reportedly escaped from the Freeborn County jail Monday afternoon and stole a car on the west side of Albert Lea.

He was being held on an Immigration and Customs Enforcement detainer, according to the Freeborn County Sheriff’s Office. He is not considered dangerous.

The release stated at about 5:30 p.m. Freeborn County jail deputies found that Nava-Urioste had escaped from the detention facility. He reportedly escaped through a jail door that was believed to have been locked, but unlatched. He then walked through a hallway that leads to an exterior door at the southwest corner of the government center.

Video showed him leaving the courthouse at about noon. He walked across Broadway Avenue between Front Street and Pearl Street.

At about 2 p.m., the Albert Lea Police Department took a complaint of a stolen vehicle from Graceland Cemetery on the west side of the city.

The suspect description was similar to Nava-Urioste.

The stolen vehicle is a 2003 silver Toyota Camry with a Minnesota license plate 978TJJ.

The release stated the investigation is ongoing.

Anyone with information about his whereabouts are asked to call the Sheriff’s Office at 377-5200 or ICE at 866-DHS-2-ICE.