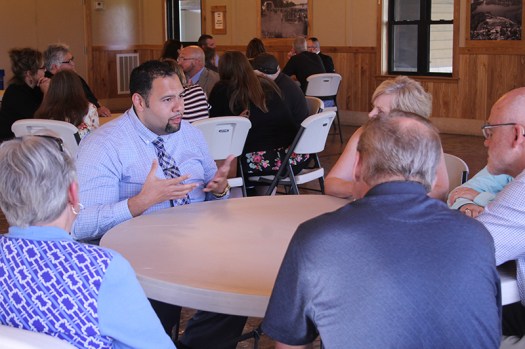 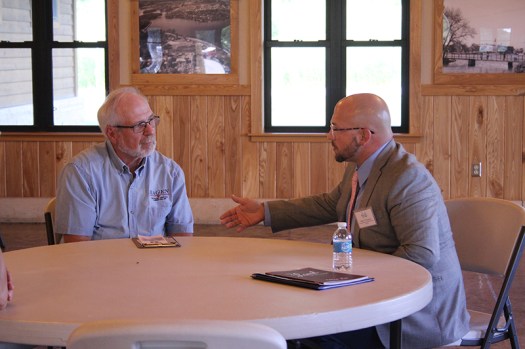 While Adam Thompson, right, has not been a city administrator, he said his background in small business ownership, economic development, engineering and urban and regional planning provide a diverse set of skills suited for the city manager position. - Sarah Kocher/Albert Lea Tribune 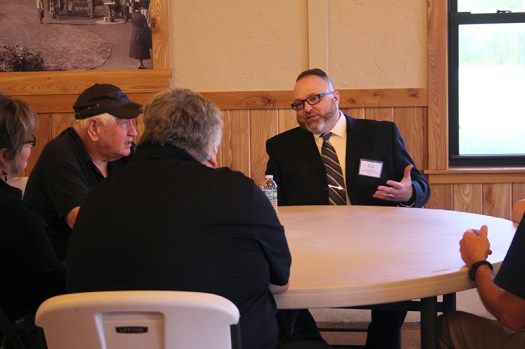 David Todd, right, is the current city administrator in Pine Island. He is one of three finalists for the city manager position. - Sarah Kocher/Albert Lea Tribune

Before going through interviews with the full City Council on Thursday, city manager finalists finished Wednesday evening with a series of interviews conducted by a different group: the public.

“I know what I’m really looking for is a guy of integrity (who) wants to see — see and help — the city grow,” Swanson said.

Thompson said he called several community leaders before interviewing to get a feel for the community.

“What I’ve heard a lot is that a lot of citizens look at the community like, ‘We should — we can — do more,’” Thompson said. “‘We have a lot of opportunities, but we’re missing them.”

He said it intrigues him that there is a community culture that desires progress and change.

“I’d love to be a place that, you know, if there’s something that is really cool and people want to get done, that there are the individuals that want to drive it forward, but there’s also the resources available to drive it forward, and that excites me because I know that’s here in Albert Lea,” he said.

Morales, who worked as administrator for the city of Northfield, Massachusetts, over a year ago, said a community’s ultimate resource is its people. He cited community efforts such as the splash pad to fundraise and put money behind its own projects.

But for candidates Morales and Todd, housing ranked as a concern for the community. Todd said he recently worked with the city to bring an apartment complex to downtown Pine Island, where he is the current city administrator, while Morales said he was instrumental in securing a grant to develop affordable housing in Monterey, Massachusetts.

For Thompson, the director of economic development for the Greater Muscatine Chamber of Commerce, it is not one particular experience, but the diversity of experience and skills — a master’s in urban and regional planning, an undergraduate degree in civil engineering, experience as an entrepreneur and work in economic development — he said he brings to the table that he feels is important for the role. This is also what interests him about the position.

“Every day is not the same,” he said.

Additionally, Thompson said, he brings team- and relationship-building skills to the table as well as a vision for the future: that community organizations can work together, moving in the same direction to ensure resources and used effectively and efficiently — and he believes he brings important elements to that team.

“You want someone who, I think you want someone to come to Albert Lea who’s really looking to drive things, to move things forward, who brings an intensity with them,” he said.

For Albert Lea Economic Development Agency Executive Director Phillip Johnson, an openness to working with partners in the area on various projects is important.

“There’s great things going on in all these different silos, and if we can you know merge all those efforts into one and have a common vision and a common message, then the area itself is going to be greater for it,” he said.

Todd said his leadership style is inclusive and allows department staff to flex their wings and do their jobs. There is value in allowing someone to run with a project, he said.

Morales said he is able to learn and implement quickly and he would bring a spirit of communication and transparency to the community. He said he would not bring with him negatives from his history with Northfield, where town leaders brought 10 complaints against him in 2018.

“Sometimes … we are a function of something that’s bigger than us,” Morales said, also saying the city had gone through 11 administrators in 16 years.

He said he stands behind the decisions he made, and that the personnel policy signed by staff allowed him to access those emails.

Community member Jan Sease said it was fabulous to have an opportunity to meet the finalists, who may be intimately involved in the community.

“It struck me about how difficult it is to come as a new person into one that requires this job requires a lot of teamwork a lot of resources,” Sease said. “All of them have reasonable experience. They’re all good candidates basically, and I think more of it is going to be how their personalities gel with some of the major palyers” in local organizations and government.

She said candidates answered her questions about how they would integrate into the community and had the ability to share how they would develop trust and teamwork.

“Those were the big ones for me,” she said.