‘I don’t want it to be eaten by time’ 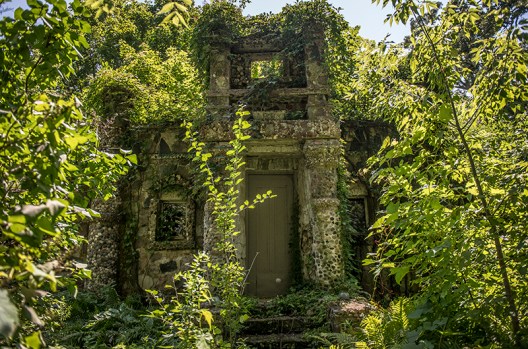 The Itasca Rock Garden, built in 1925, has become overgrown and in need of maintenance over the years. - Colleen Harrison/Albert Lea Tribune 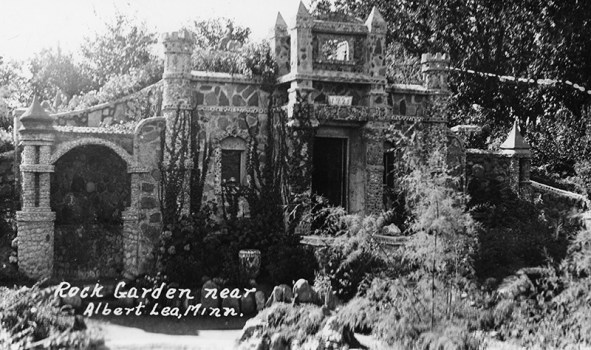 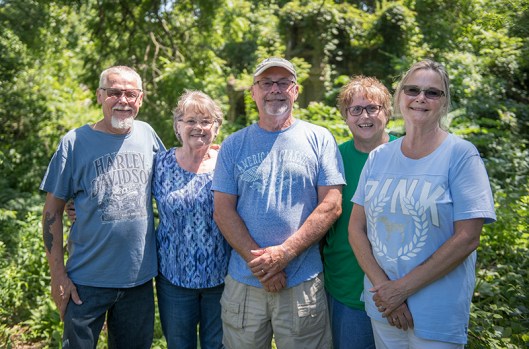 Cousins Mark Hatleli, Karen Carlson, Bob Hatleli, Cathy Tovar and Linnea Sanchez grew up visiting, playing and working in the rock garden when it was owned and maintained by their grandparents. - Colleen Harrison/Albert Lea Tribune 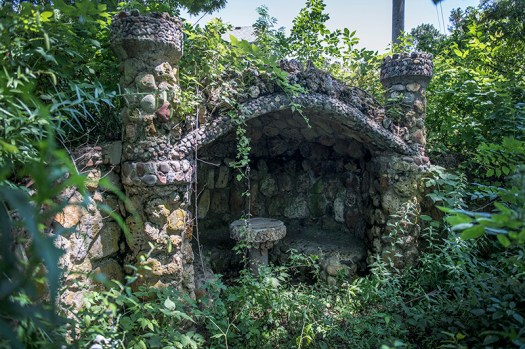 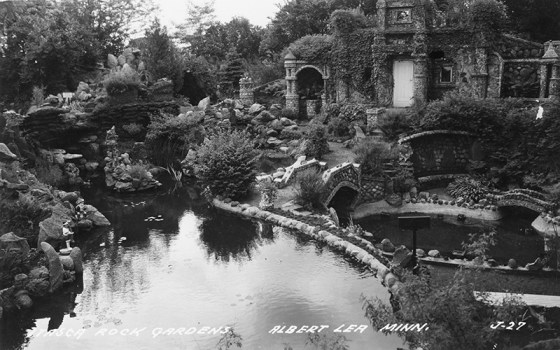 The Itasca Rock Garden was constructed in 1925 by John L. Christensen, initially as a way for Christensen to store beehives. - Photo courtesy Freeborn County Historical Museum 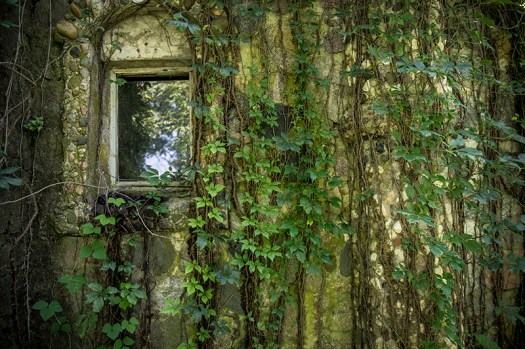 The grandchildren of Arthur and Edna Johnson, who owned the property until 1985, are hoping a foundation will take on the task of restoring and preserving the Itasca Rock Garden. - Colleen Harrison/Albert Lea Tribune 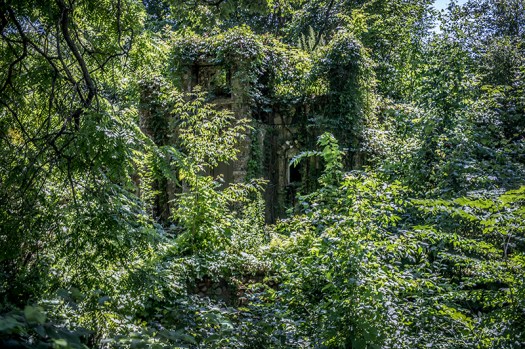 In addition to a main castle-like structure, the garden once had grottos, bridges and even fish ponds. - Colleen Harrison/Albert Lea Tribune 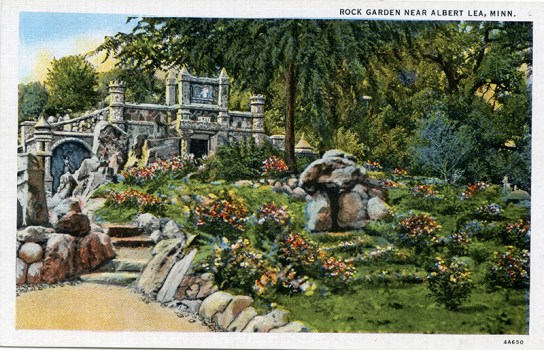 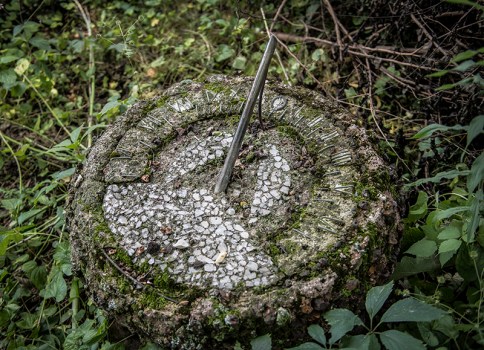 A sundial is just one of the details found in what remains of the Itasca Rock Garden. - Colleen Harrison/Albert Lea Tribune 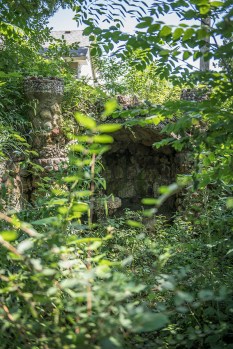 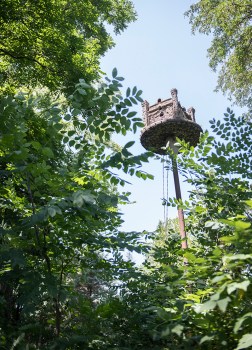 A birdhouse is just one of the details found in what remains of the Itasca Rock Garden. - Colleen Harrison/Albert Lea Tribune 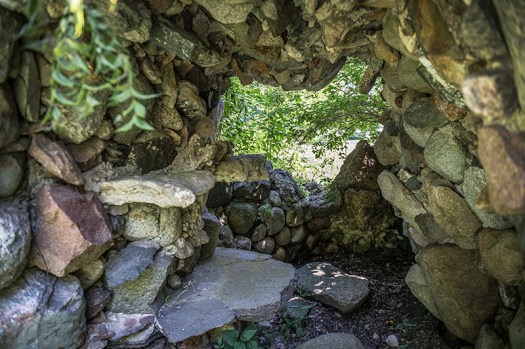 In its prime, the Itasca Rock Garden was a wonderland for all ages.

Built in 1925 by John L. Christensen, it was initially constructed as a place for Christensen to store beehives, according to some reports. Other reports state it was made as a root cellar of sorts.

What began as a small project grew and grew until Christensen gathered more rocks and concrete to make other structures, and a rock garden was formed, according to Tribune archives.

In addition to a main castle-like structure, the garden had grottos, bridges and even fish ponds.

Over the years, the Itasca Rock Garden became a popular destination for both locals and out-of-town people to explore and visit for photographs, whether it be senior photos, weddings or anything in between.

In recent years, however, the garden has become overgrown, and descendants of two of the garden’s former owners have contacted a restoration foundation in an attempt to restore both it and the adjacent house on the property back to their original glory.

‘I just hate to see that this place would be lost’

Scott Johnson of Lacon, Illinois, one of the grandchildren of Arthur and Edna Johnson, former owners of the property, is leading the restoration effort. He started a group on Facebook called “Save the Itasca Rock Garden.” As of Friday afternoon, it had almost 400 members.

“I want to spread awareness right now and get as many people as we can to join our group,” he said.

If things don’t move forward with the restoration foundation, he hopes he can at least get people together to help clean the garden up or who might have expertise about how to get the property back.

The garden is northwest of Edgewater Park near the site of the pioneer town of Itasca and at the corner of Itasca and Bluegrass roads.

Scott Johnson said his grandparents purchased the property in 1954 from Christensen’s widow and her second husband, George Colbertson.

Johnson’s grandfather died in 1977, and his grandmother continued to take care of the property until she was diagnosed with Alzheimer’s disease. The family then sold it in 1985 after she died.

Joe Spark Jr. then bought the property, and he died in 2014.

The property now is in foreclosure.

Scott Johnson said he found out about the restoration company — which he declined to name for the story — when he and his wife visited the Hartman Rock Garden in Springfield, Ohio, north of Dayton, Ohio.

It had been in a similar state until someone contacted the restoration foundation, and they ultimately agreed to restore it.

After he saw that garden, he came home and shared the pictures he took with his cousins, and they told him what was happening with the Itasca Rock Garden. He moved forward with contacting the foundation for the Albert Lea project.

“I just hate to see that this place would be lost — that somebody would buy it and say that’s too much work, let’s bulldoze it,” Scott Johnson said. “There’s so many people who had great memories out there.”

‘It was an amazing childhood to be there’

One of Scott Johnson’s cousins, Karen Carlson, said she was 4 or 5 years old when her grandparents bought the property.

“I basically grew up there,” Carlson said. “The garden was my playground. It’s magical — it really was.”

She said she has many memories playing in the garden, including hide and seek, and also helping take care of it.

She said the children liked to pretend it was a real castle.

“It was just an amazing childhood to be there,” she said.

As she and her cousins got older, they worked there, helping pick up sticks, rake up grass trimmings and weed the garden.

In the wintertime, she recalled helping feed the fish from the pond, that were brought inside to another pond in the basement. Her grandmother fed them dry oatmeal.

“It breaks your heart, it really does,” Carlson said of the condition of the garden now. “When my brother, Bob, first saw it, he just burst out in tears.”

Linnea Sanchez, another family member from Austin, said she, too, remembers experiences at the garden.

“The rock garden, it was like a wonderland to us — the caves, the grottos — playing in there and pretending we were in a different world,” Sanchez said.

She said she would be elated if the garden were to be restored.

Mark Hatleli, another cousin, said after his grandfather, Arthur Johnson, died, he and his mother moved in with his grandmother.

“I really thought it was like going to Disney World,” he said. “Back then, there wasn’t a lot around. We kind of thought we had the fair right there.”

Carlson said her grandparents had always wanted to get the garden put on the National Historic Register because they were afraid it wouldn’t be kept up.

She said though the restoration will require a lot of work, she thinks it will be worth it, not only for her family but for the community, too.

“Once all the weeds and the small trees are cleared out there, there is still a beautiful garden there,” she said.