Memorial services for Larry James Knudtson of Hayward will be at 2 p.m. Tuesday at First Lutheran Church in Albert Lea. The Rev. John Holt will officiate. Interment will be in Hillcrest Cemetery. Military honors will be accorded by Albert Lea veterans organizations. Friends may visit with family one hour before services at the church. 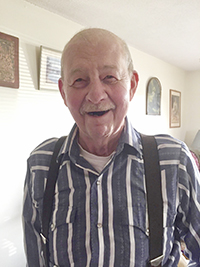 He was born July 7, 1940, in Faribault County, the son of Otis and Emma (Larson) Knudtson.

He served his country in the U.S. Army from November 1960 until his honorable discharge in August 1964.

He married Marleen Redell, and then Jackie Johnson; they were later divorced.

Larry was a member of First Lutheran Church in Albert Lea.

Throughout his life he worked in construction, but truly enjoyed the years he spent as a truck driver.

In his later years his greatest joy came from spending time with  his children and grandchildren.

He was preceded in death by his parents Otis and Emma Knudtson; two sons, Kurt Knudtson and Jerry Knudtson, in infancy; brothers Elwood, Gerald and Randal; and sisters Kay, Gerry and Mona.