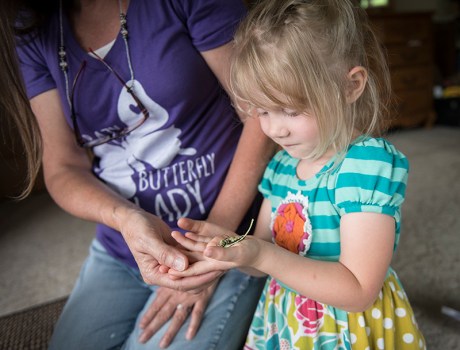 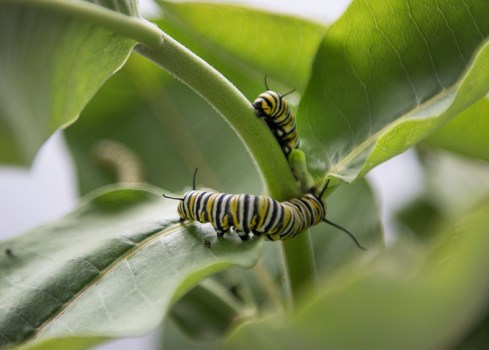 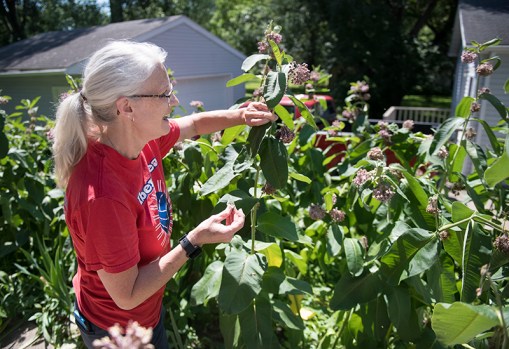 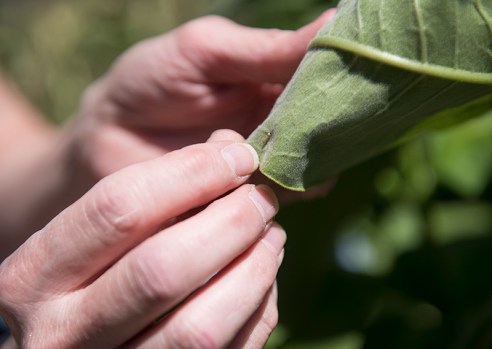 Hundley finds a caterpillar on one of her milkweed plants last month. - Colleen Harrison/Albert Lea Tribune 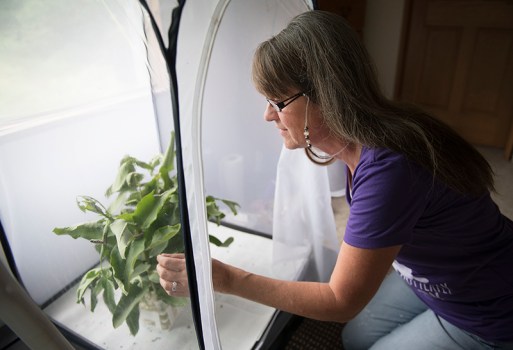 Solomonson tries to keep the room as humid as possible where she keeps her monarch caterpillars, as she wants them to be as acclimated as possible when she releases them as butterflies. - Colleen Harrison/Albert Lea Tribune 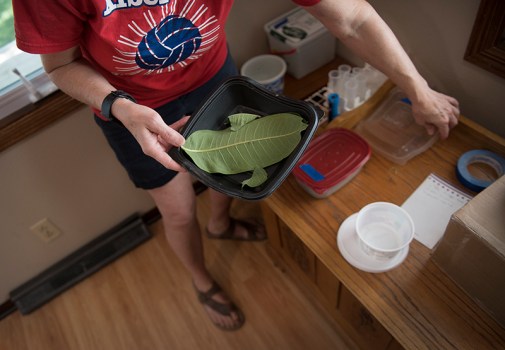 Hundley keeps her monarch eggs and larvae separated according to what stages they're in or how many days old they are. - Colleen Harrison/Albert Lea Tribune 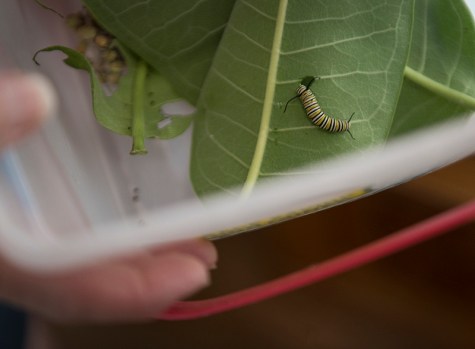 Editor’s note: This is the second in a four-part series. Pieces will be published on the third Saturday of each month.

The milkweed is in bloom, supplying whiffs of what Hundley describes as a lilac-like fragrance. The blossoms also provide butterflies nectar to feed on.

But in addition to July 12’s lone monarch, at least two dozen flies buzz around the same milkweed patch. For Hundley and fellow monarch-rearer Tammy Solomonson, these flies are not welcome.

The flies are one reason why Solomonson brings her butterfly-raising operation inside her house: because while they’re caterpillars — or just “cats,” as Solomonson says at times — they have a surprising amount of predators, she said.

Both Solomonson and Hundley rear monarch butterflies inside their homes, collecting caterpillars and eggs from milkweed leaves on plants outside and bringing them inside to hatch, grow and transform into the butterflies they release back outside.

The ones taken prisoner by tachinid flies don’t make it that far.

Cora Lund Preston, communications specialist for Monarch Joint Venture — a partnership of several agencies, organizations and programs teamed up to protect the U.S. monarch migration — said the tachinid fly is a parasitoid, a type of parasite whose larvae live inside the host, eventually killing it.

For the tachinid fly, the monarch caterpillar gets to play host to this killer houseguest.

When caterpillars prepare to chrysalis, they find a sturdy spot from which to hang while DIY-ing their new home construction. As it hangs, its head curls up slightly to form a j. It is at this time, when the caterpillar is trying to make its chrysalis — or sometimes after the chrysalis is successfully complete, though Solomonson said that is rare —  that the tachinid fly larva pod will emerge, dangling from a long thread.

It is nature’s version of “Alien.”

At first, Solomonson said, she couldn’t identify which caterpillars were being eaten from the inside out. But since then, she has begun to notice that caterpillars with tachinid fly larvae inside j-hang at a noticeably smaller size than its healthy counterparts.

So far this year, Solomonson has lost three caterpillars to tachinid flies. She waits to act until they drop the fly larvae.

That way, she can wash them down the sink.

She said she sees the flies scavenge the milkweed continually.

“You see them all over the leaves, going back and forth, looking for a tasty treat,” Solomonson said.

Hundley will be getting her hands on some fly strips, she said.

A plague of predators

The flies are one of several threats to monarch caterpillars.

“I had no idea these creatures had so many predators,” Solomonson said.

Though monarch caterpillars have a reputation for being toxic, Lund Preston said, there are many animals and insects that still prey on them. Both women also mentioned wasps and spiders as noticeable problems for both women’s outdoor caterpillar populations.

Each year, they said, the plagues seem to rotate through. First, it was the wasps, Solomonson said. Then came the birds. This year, Solomonson said she has had to keep her eye on frogs she finds using the milkweed leaves as if they were lilypads.

Furthermore, insects like stink bugs or ladybugs can eat caterpillars when they are still very small, Lund Preston said.

“There’s a wide variety of insects in that ecosystem,” she said.

When Solomonson was out canvasing one day with her field kit — the floral tubes she uses to keep milkweed trimmings fresh, boxes for gathering caterpillars and eggs and scissors for cutting milkweed leaves — she happened upon a spider eating a caterpillar that was still alive and struggling.

“‘What do I do?’” Solomonson said to the caterpillar. “‘I can’t even save you.’ One spider, I snipped off his leg — the front leg.”

It was out of spite.

“Well, yeah,” she said. “Of course it was. Get off my caterpillar!”

The spider still won that round, Solomonson said, dragging its prey away from his armed observer.

And, just like anything else, monarchs are subject to disease, Lund Preston said.

One such disease is ophryocystis elektroscirrha (OE), a protozoan parasite that makes it difficult for monarch butterflies to fly long distances or to come out of the chrysalis properly, she said.

Solomonson said she suspects some of her butterflies had OE two years ago, as she had several who could not hang on to a branch after emerging or were unable to fully pump out their wings after emerging from the chrysalis.

The parasite is transferred through spores and can be very contagious, Lund Preston said. It transfers from adult butterflies to its eggs and milkweed when the female lays its eggs on the plant. After caterpillars emerge, they eat their eggshell and then the leaves of the plant, ingesting those spores.

“The migration in the fall is a really important part of kind of weeding out the monarchs that have OE, because if they have a bad enough infection of OE, they’ll have a hard time making that migration and they’ll probably die along the way,” Lund Preston said.

She said this could lower the risk of infection for the monarch population as a whole.

Monarch caterpillars are further threatened by manmade challenges. These include loss of milkweed habitat — the caterpillars’ only source of food — as well as exposure to pesticides.

Lund Preston cautioned consumers who may be purchasing milkweed to plant in their gardens. Some plants are treated with neonicotinoids, an insecticide that cannot be washed off because the plant takes it up into itself. This is often a treatment choice for milkweed plants sold at big box stores, Lund Preston said.

“It’s very important to make sure folks are asking about that and expressing the demand for pesticide-free plants,” she said.

Lund Preston encouraged those interested to purchase from local and small nurseries, as those typically carry pesticide-free plants.

In her bedroom Thursday night, Solomonson was making it rain.

She doesn’t do it all the time — only when the clouds build up outside and unleash the weight of water onto the waiting ground below.

Inside, on a treadmill pressed up against the bedroom window, Solomonson’s caterpillars will receive a simulated rainstorm at the hands of a spray bottle.

In the morning, too, she will spray them to simulate dew.

Solomonson said she wants it to be as natural an environment as possible so the caterpillars can turn out the way they are supposed to. Other people may handle their caterpillars more frequently than she does, she said, citing an Instagram image she saw of a bowl full of monarch caterpillars that makes her raise her voice.

She tried raising them outdoors — leaving the netted caterpillar housing outside — but still could not keep the tachinid flies out.

So instead, when it gets hot, she takes their mesh enclosure into her bedroom, shuts the door, opens the window and lets them have the heat, humidity and sun on the belt of her treadmill.

Both women use plastic containers to separate caterpillars based on their size. Monarch caterpillars do not see well, Solomonson said, so separating them out means smaller caterpillars avoid being trampled or eaten by accident.

Hundley’s smallest caterpillars live in a repurposed Chick-fil-A container with a clear lid. As they grow, their housing upgrades to a washed-out Country Rich vanilla ice cream bucket.

Those that look sickly are separated in both homes. Solomonson has hers in a blue-lidded tupperware labeled, “ICU.” (Lund Preston recommends those who raise monarchs do separate sick caterpillars to prevent the spread of disease. Sometimes, she said, the most humane thing to do is dispose of that monarch, perhaps by putting it in the freezer.)

In 14 days, they will transform from a creature with a circumference smaller than a toothpick — so small Solomonson needs her reading glasses to make sure she doesn’t miss any — to chubs the size of Hundley’s pinky finger. Eventually, both women will transfer them to netted enclosures that allow the caterpillars to climb up the sides toward the top when they are ready to chrysalis. To the untrained eye, the two enclosures Solomonson uses resemble laundry hampers.

The more the caterpillars grow, the more they eat.

At their largest, Hundley has seen two caterpillars strip a full stalk of milkweed down to the bones.

“It will be just like a branch,” she said.

Last year, she put a few stems of milkweed into a vase on the table, caterpillars attached. They stayed there and ate.

“You could hear them chewing,” Hundley said. “… If there’s enough of them, the bigger ones, you can hear it. Yeah, you can be sitting there drinking coffee and be like, ‘I hear chewing.’”

The caterpillars spend their whole lives consuming milkweed, Solomonson said. And while they do, sometimes Solomonson will sit and watch them go to town in the late afternoon sun. It is a process of discovery.

“I’ve studied every detail about a cat,” she said. “Every year, I learn something new.”

Citizen involvement “can make a really big difference,” Monarch Joint Venture communications specialist Cora Lund Preston said. “… We need everyone to get involved in monarch conservation to make a difference at the scale that we need to.”

From July 27 to Aug. 4, volunteers in the U.S., Canada and Mexico can contribute to that conservation effort by participating in the 2019 International Monarch Monitoring Blitz.

To join the blitz, go out to gardens, parks and green areas and monitor milkweed plants for monarch eggs, caterpillars, chrysalises and butterflies, a press release said.

“Even if you don’t find any monarchs, reporting if you check some milkweed, it’s really valuable,” Lund Preston said. “… That information can help give scientists a snapshot of the breeding population to compare from year to year.”

To submit information as part of the blitz, go to https://app.mlmp.org/Observations/Submit.

To monitor for a longer stretch of time, check weekly and report what you see as part of the Monarch Larva Monitoring Project. Those raising monarchs are also encouraged to report to the project. Citizen science efforts such as these have helped make strides in understanding the tachinid fly, a monarch parasitoid.

To register as a volunteer for the Monarch Larva Monitoring Project, visit https://app.mlmp.org/Account/Register.