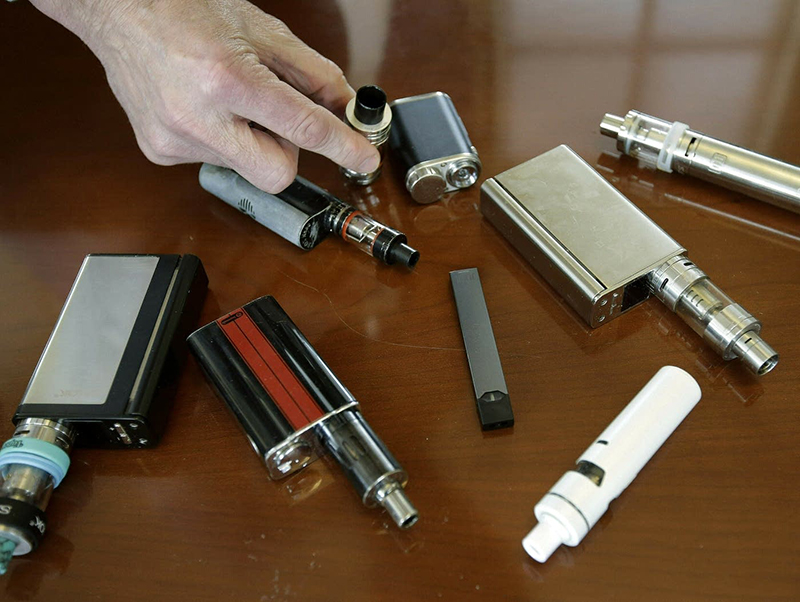 A high school principal displays vaping devices that were confiscated from students in such places as restrooms or hallways at the school in Massachusetts in April 2018. In Minnesota, a state law banning vaping in most indoor public places takes effect Thursday. - Steven Senne/AP photo 2018 via MPR News

As a new Minnesota state law banning vaping in most indoor public places takes effect, some believe it will slow an explosion in popularity, while others are skeptical.

State Rep. Laurie Halverson first backed regulating where e-cigarettes may be used in 2014 but lacked the votes. The Eagan Democrat says a lot has changed in less than five years; the measure passed with bipartisan support.

“I think the fact that it passed so overwhelmingly this session really speaks to the fact that communities are seeing the impact of e-cigarette use especially among youth,” she said.

The Minnesota Department of Health’s most recent survey from 2018 reports 1 in 5 high school students use e-cigarettes — a nearly 50 percent increase since 2014.

Jacob Bernstein picked up smoking at 14 and quit by the time he was legally allowed to smoke at 18. He opted for e-cigarettes and went on to open his business, Imperial Vapor, in St. Paul in 2016.

“My main concern is people will see this and the way the state treats and regulates these two different industries and assumes, because of the state’s approach, they must be very very similar and they’re just not,” he said, adding he’s not concerned the law will negatively affect his store’s business.

The advocacy group Clearway Minnesota is trying to reduce the use of tobacco products. Spokesperson Laura Smith said the updated law also is intended to keep people who do not vape from breathing the aerosol.

“E-cigarette aerosol contains many harmful chemicals and I suspect we won’t know the long term impact of those for decades,” Smith said.

Scientists don’t know much yet about the long-term effects of “vape juice,” the liquid used in e-cigarettes and vaporizers. But researchers from Duke and Yale universities released findings this week analyzing the liquid and the vapor produced when it’s heated. They found some kinds of e-liquids are reacting to form irritating chemicals while they’re sitting on shelves.

According to the Centers for Disease Control and Prevention, more than 3 million young people, as well as some adults, use e-cigarettes in the U.S.