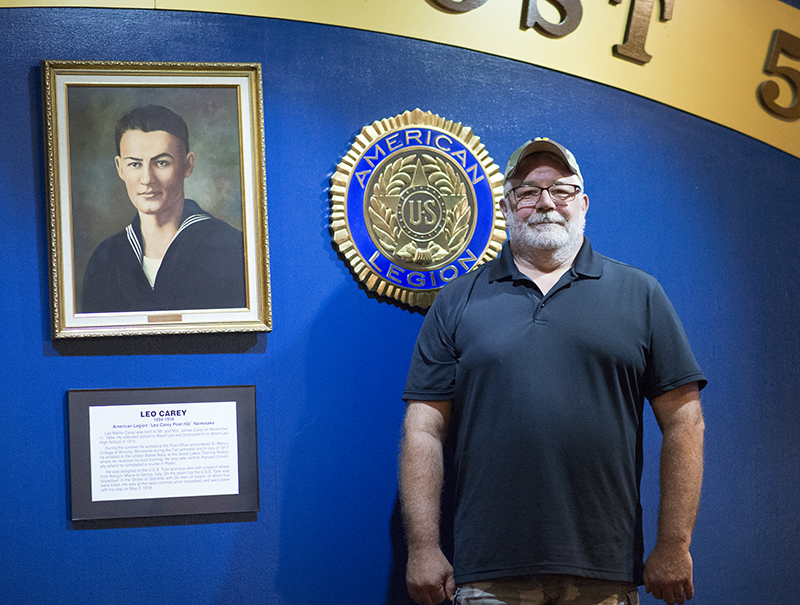 Taking over in late June for previous Cmdr. Paul Nolette, Olson said he learned a lot from Nolette before he finished and plans to keep a lot of the same ideals.

“Paul and I are pretty tight, we’re pretty good friends,” Olson said. “When he was commander I hung around him and tried to learn everything he had to teach me. He’s a great guy, a super smart guy. The training I got from him was well worth it.”

Olson spent 20 years in the military himself, starting out in infantry in 1982. He worked as a tank mechanic for a number of years before moving to the National Guard in Albert Lea. Olson spent time in Colorado, Alaska and Germany and then was back in Albert Lea before retiring in 2003.

After a couple years of retirement, Olson said he decided to become a member of the Legion to see what it was like.

“I started coming and I just watched,” Olson said. “I went through the ranks just like everybody else. I got going and then the position of commander opened and I thought I’d give it a shot. Now here we are today.”

Olson said there are a lot of responsibilities that come along with the job of commander. Along with a few small projects to fix things up, he said his main goal is to keep the needs of the veterans at the forefront.

“The biggest thing is helping veterans, making sure their GI bills are in order, getting up to the hospital and the VA and all that are taken care of,” Olson said. “We try to help as many veterans as possible. That’s the biggest goal here is keeping veterans happy … I just want to give back what I was taught to all the veterans that want and need the help.”

After retiring from the military, Olson worked as a diesel mechanic, but multiple broken ankles during his service and surgeries thereafter cut his time as a mechanic short. For the last 10 years, Olson and his wife, Lisa, have been running a day care facility.

In his free time, Olson said working on engines is still a big passion of his. He also enjoys camping trips and time fishing on the lake.

“I just hope all the veterans in the area come out and support us,” he said. “They’re the ones that keep these doors open. We want to help veterans, that’s why we’re here.”

Interesting fact: not many people know Olson’s father’s name. Most people know him as “Ole,” which is where Olson gets his nickname from