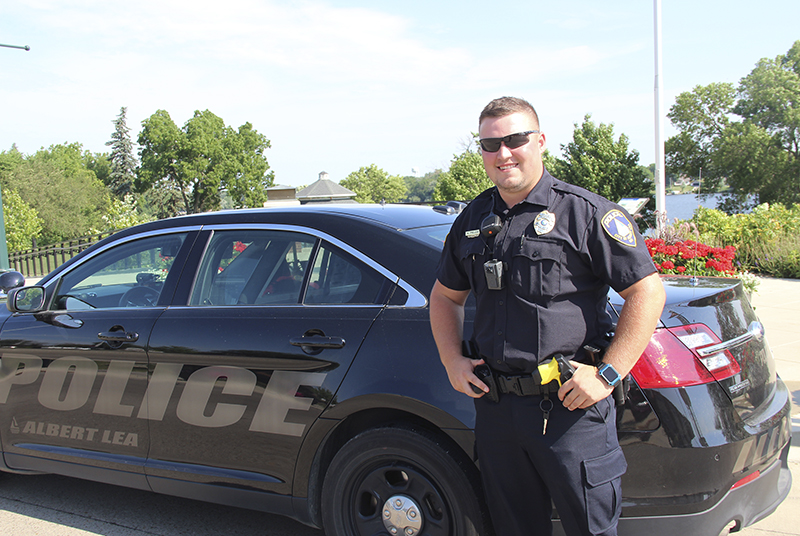 Mitchell Preusse started with the Albert Lea Police Department on July 8. He said he is excited to get out and meet the people in Albert Lea and encouraged people to say hello to him when they see him out in the community. - Sarah Stultz/Albert Lea Tribune.

The Albert Lea Police Department’s newest officer is eager to get out into the community.

Mitchell Preusse started with the department July 8 with classroom training and had his first day on the road Monday with another officer.

New officers with the department go through four phases before they respond to calls on their own. With the advancement of each phase, they complete more and more of the work an officer would be expected to complete, until the last phase when they complete 100% of the work under the supervision of another officer, he said.

Graduating from high school in Monticello, Preusse, 24, joined the military afterward and served as an aviation mechanic, working on Black Hawks, Chinooks and Apaches out of Fort Bliss in El Paso, Texas. He was there for 2 1/2 years before returning home and enrolling in Alexandria Technical and Community College and earning an Associate in Applied Science degree in law enforcement.

He said he was interested in law enforcement because of the camaraderie and the opportunity to be able to do something different every day.

“I like being there to help people,” Preusse said. “If I can be there during someone’s worst day to be a little guidance for them, it’s worth it.”

Preusse comes to Albert Lea after time as a correctional officer for the Todd County Sheriff’s Office in Long Prairie, where he said he learned a lot and dealt with many different types of situations.

He said he is happy the Todd County Sheriff’s Office took a chance on him, and he is glad now to be in Albert Lea. He likes the support the department receives in the community and how the department invests in its officers.

“They’ve welcomed me in with open arms, and I’m very fortunate for that,” he said.

He plans to find a place to live in Albert Lea over the next month, but right now is commuting from Owatonna.

Preusse — whose last name is pronounced like “price” — said he was attracted to the job in Albert Lea because it gave him a chance to keep busy while still being in somewhat of a rural community, as well.

He said his grandfather and uncle farm about a mile away from where his parents live, and from the age of 12, he started running the smaller tractors and some of the other equipment. By the time he was 17, he said he was driving the semis and other larger equipment. He said that part of his life has meant a lot to him.

He considers himself a big outdoorsman and enjoys walleye fishing and ice fishing, as well as hunting and snowmobiling. He grew up playing hockey and eventually would like to coach.

He and his girlfriend, Quincy, are expecting a baby in the coming months, and he said he has been busy training his yellow lab, Whaylon, who is 7 months old.

Prusse said he wants people to know he is approachable and encouraged people to stop him when he is out and say hi.

“I want to show a different side of law enforcement. That’s kind of my mission — especially with police being under scrutiny and all the stuff you see in the media these days.”

Albert Lea Deputy Chief of Police Darren Hanson said Preusse has a lot of enthusiasm, and he has been impressed with his ability to interact and engage with people.

He said Preusse has the type of personality where people are going to be comfortable talking with him, which is something the department’s leaders want for all of the officers in the department.

Address: lives in Owatonna but plans to move to Albert Lea in the next month

Family: girlfriend, Quincy; parents, who were high school sweethearts; sister with two children; brother who is also pursuing a career in law enforcement

Interesting fact: likes trying new foods — both cooking them and tasting them