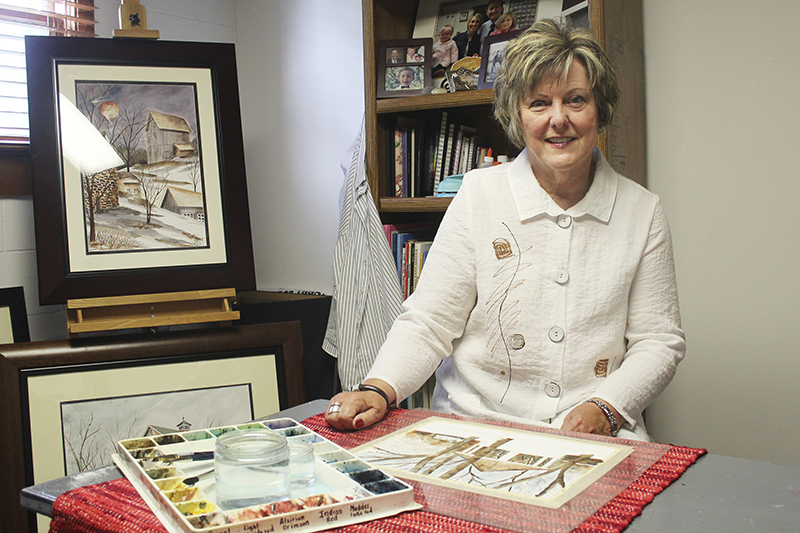 Carolyn Reeder keeps a studio in the basement of her home in Northwood, but she prefers to paint outdoors using natural light. Sarah Kocher/Albert Lea Tribune

NORTHWOOD — Carolyn Reeder cared about art so much, she did not become an art teacher.

Instead, the Northwood artist spent 40 years as an elementary teacher — and loved it, she said. Though she loved art, she said she worried she would always find something to critique in her students’ work.

“I felt like that isn’t’ what an art teacher should do,” Reeder said. “They’ve got to let them express themselves.”

However, Reeder did try to keep art as part of her classroom, she said, and encouraged her students to make art. Many of her students asked for watercolor kits for Christmas, she said.

Though she dabbled in it while teaching, Reeder herself didn’t get started with watercolor until her children were grown and out of the house, she said.

While she has a studio in her basement, her favorite studio is outside. She will often sit outside in her backyard to paint to take advantage of natural light, Reeder said.

Most of her work features barns or Northwood landmarks, which Reeder, who graduated from high school in Northwood, said are popular with fellow Northwood residents. Recognizable Northwood buildings and locations also comprise the entirety of a black-and-white sketched coloring book Reeder recently made for the town’s Historic Preservation Commission.

On trips, Reeder will bring her iPad to take photos of buildings that catch her eye. She likes the historical aspect of her work.

“I just think that’s really kind of unique,” she said. “And barns are going by the wayside. So, if it can preserve them in a painting, it really helps.”

But even as the barns stay, the style may shift around them. Reeder’s more recent work experiments more with the abstract, she said, as she adds geometric shapes surrounding groupings of barns.

These style shifts are informed by the classes she takes, Reeder said. She tries to take as many as she can. In addition to enjoying the classes, Reeder said she learns something — techniques and tips — every time.

Some of Reeder’s paintings are for sale in Conrad, Iowa, and at the Top of Iowa Welcome Center off Interstate 35. They are accompanied by greeting cards printed with some of Reeder’s original paintings.

“There’s no point in stacking framed artwork in your basement,” she said.

Some are harder to part with than others, Reeder said, but they have to have a home somewhere.

“I just can’t have an art gallery in my house,” she said.

The closest to this is her studio, where pieces in varying stages of completion wait. The waiting is important. She often works on four, five or six pieces at a time.

Watercolors can be tricky. Reeder said she knows her limits with the medium. It can be unforgiving, she said. With oil painting — which Reeder used to do, as well as rosemaling, a traditional, decorative Norwegian art — a purple flower can be covered over with another color, she said. With watercolor? You can’t take it back, she said. She also needs to leave a lot of white space in her work to create interest, she said.

“I think that inspires you sometimes is when you see how the watercolors flow together,” she said.

On Wednesday, two separate barn scenes are immobilized, stuck to the wall with torn-off pieces of masking tape as they await their fate. One she likes. The other? Reeder said she isn’t so sure.

This isn’t the case for most of her work, Reeder said. She likes a lot of her own pieces, which she mats herself.

And she loves to paint, Reeder said. She puts music on and sits outside, and it is relaxing.

“Everybody needs to find their passion and I, you know, I’m grateful that I am able still to paint and that I have the opportunity to paint now by being retired from teaching,” she said.

It’s a passion she hopes to pass on to her granddaughters, she said. On either side of a grouping of black frames filled with older works hung from her studio wall is a crayon picture created by one of her granddaughters. Next to a few CDs on top of her art supply cubbies is a container of crayons for her granddaughters to use when they visit. Their paper has its own marked cubby.

“When they come here sometimes, I have one that comes down and they just come down to the art room and they get their paper out or they’ll get crayons out or they’ll say, ‘Grandma, can we paint?’” Reeder said. “I think If you can instill that in children that they still have a love for something like that — I hope it continues. Maybe it won’t, but they love that. … That’s important to me.”