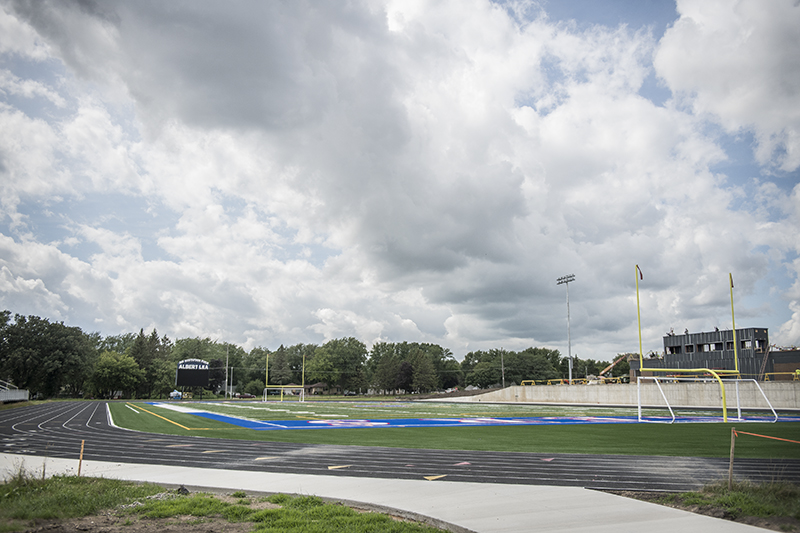 While parts of the Hammer Complex construction are behind schedule, the Albert Lea school district is committed to hosting the Sept. 3 varsity boys' soccer game at the complex. - Colleen Harrison/Albert Lea Tribune

Soccer game to proceed Sept. 3 despite delay in grandstand construction

As students prepare for school to start, some will also prepare for a few months of make-do as construction continues at Hammer Complex and Halverson Elementary School.

Portions of each project, approved collectively as the meat of a $24.615 million referendum passed for Albert Lea Area Schools last May, are behind schedule.

However, both projects are anticipated to come in under budget, said Albert Lea Area Schools Director of Facilities Steve Anderson. Halverson is below budget by $58,000, he said, while Hammer Complex is under by $413,000.

While Anderson is skeptical the grandstand will be completed ahead of the Sept. 3 varsity boys’ soccer game, the district is committed to hosting the game in Hammer Complex at that date.

“We plan on holding the Sept. 3 game there no matter what,” Anderson said in an email.

The turf field is already in and the bleachers will be installed next week, he said, but whether the grandstand — complete with bathrooms and concessions — will be done is up in the air.

He is still working through backup options: portable toilets, a tent for concessions (or no concessions at all), a portable scoreboard in case the newly installed one is not up and running. At this point, these plans are tentative. They still have two weeks left, Anderson said.

“Hopefully, if things go well, we may be in there,” he said.

Anderson said a delay in the roofing delayed finishing the grandstand, as the roof has not been watertight for work to occur in the restroom and concession areas.

The plaza area’s concrete is being poured, and the new fence surrounding the field is being put in. The parking lot is close, Anderson said, but if it is not paved in time, visitors can park on the gravel base.

This week also saw the start of drainage installation for the soccer fields, which will be followed by the baseball and softball fields, Anderson said. Irrigation work will start in the soccer fields first before moving to the ballfields. The softball concessions area is being roofed.

Next week, the visitors’ bleachers will have a ramp put in and part of the first two rows of seats removed to retrofit them for Americans with Disabilities Act compliance, Anderson said.

He said not much progress has been made on the field house, as work was focused on the grandstand. 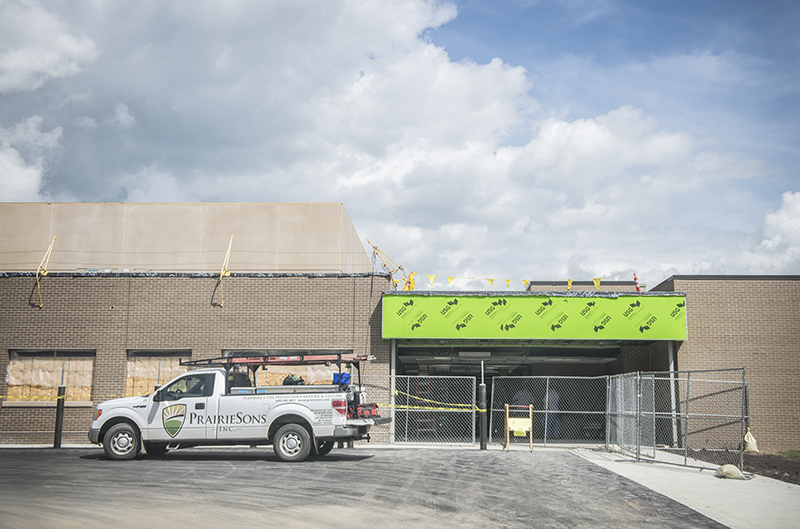 Delays with subcontracted work are a factor in the slowdown at Halverson Elementary School, where the new west entrance may not be ready ahead of school’s start Monday. – Colleen Harrison/Albert Lea Tribune

Delays with subcontracted work are also a factor in the slowdown at Halverson, where the new west entrance may not be ready ahead of school’s start Monday.

The entrance is being redone in an effort to increase school security.

Dean Bendtsen, JD Driver owner and project manager for the Rose Creek-based contracting company, said those accessing Halverson Elementary School will still be able to use the old west entrance until the new entrance is completed. He said he does not have an expected date on when that could be.

“Halverson was just a very tight window,” Anderson said. “It was so tight.”

The new office area is also slightly behind target for completion, Bendtsen said. He is hoping to have them ready for occupancy by mid-September.

“We’ve got a lot of subcontractors that are overloaded this summer and have struggled to keep schedule,” Bendtsen said.

However, work on expanding the gymnasium is on schedule for its intended Nov. 15 completion. Additionally, the restrooms near the gymnasium (expanded to include more stalls) and the special education rooms (moved deeper inside the building from the space that will now be used for the gymnasium and office) are ready for use, Bendtsen said.

“I know they’re excited to have that open, and we’re excited to get it done, but we need a couple of pieces to come together here, and hopefully it’s not too much longer,” he said of work on the school.

At Brookside Education Center, changes to house the new day care to be offered first to district employees and then to the community are also underway. Interior walls were knocked out and will be re-erected in different places to create proper room distinctions. Exterior doors will also be added so each room has access to the outside, Anderson said.

The anticipated project budget is $298,000. This project does not use referendum funds.

Brookside will not have part of its parking lot resurfaced as planned for the summer. Rain put contractors behind, so the parking lot will not be addressed until next year, Anderson said.

However, the Southwest Middle School parking lot will be ready in time for school. Parking spaces will be painted this weekend.

The parking lot work was paid for with long-term facilities maintenance funding. 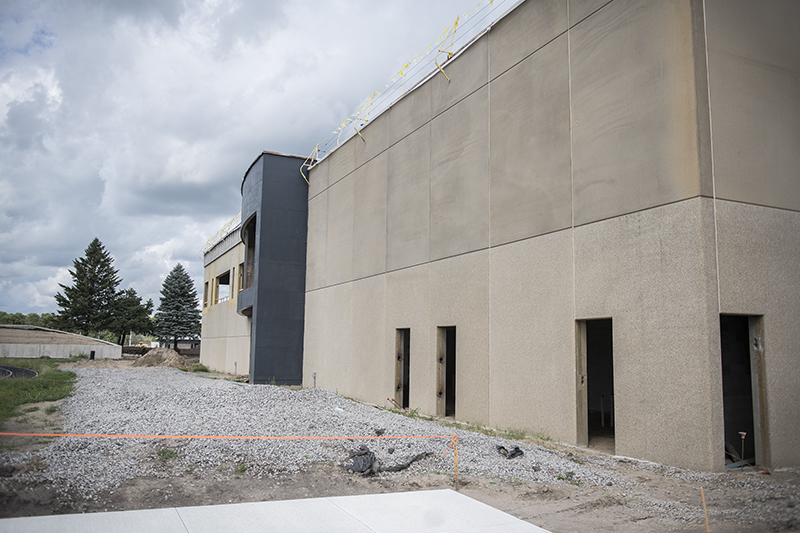 Not much progress has been made on the field house recently, as work has been focused on the grandstand, according to Albert Lea Area Schools Director of Facilities Steve Anderson. – Colleen Harrison/Albert Lea Tribune