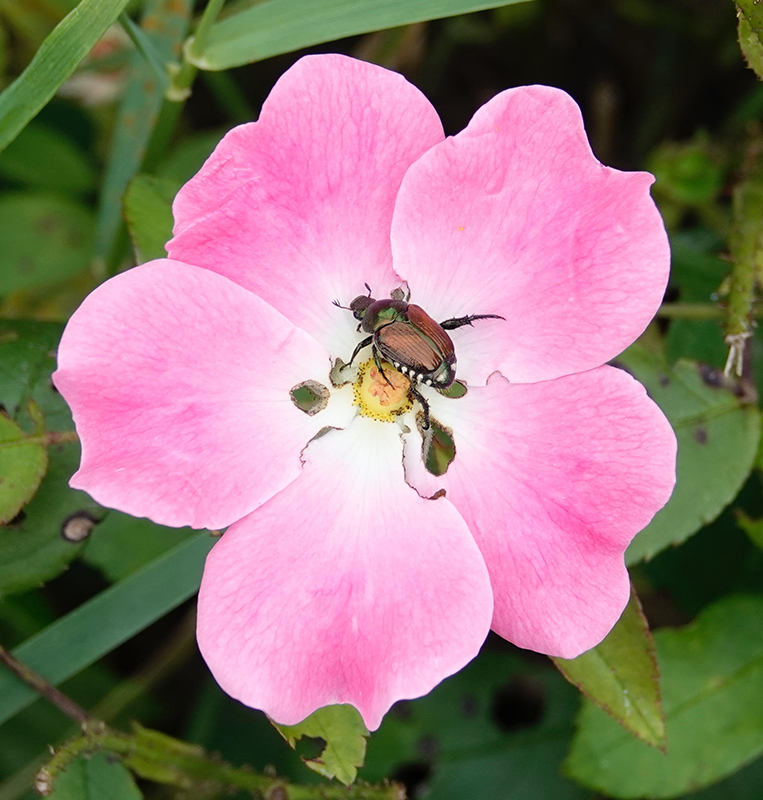 It can be difficult to find a lone Japenese beetle. Al Batt/Albert Lea Tribune

“Everything is nearly copacetic. I’m known for my great ambition. That’s a hard thing to overcome. I’ve found a way to take more time off. I’m celebrating Canadian holidays, too. And I’m the chairman of a board where I schedule meetings when no one can attend. That gives me more time to find a rotary dial app for my cellphone and to eat. I’ve a five-second rule in my house. If I drop something on the floor, I can still eat it as long as I pick it up within five seconds. The problem is that I have a three-second dog.”

A red-tailed hawk flew overhead low enough that I could see the prey item it carried was a vole. The vole is the “potato chip of the prairie” — a popular food for many animals.

Birdsong had diminished. It begins to do so in mid-July each year. There is little need for singing. I heard the angry calls of blue jays and crows. The presence of a raptor irritated them. I heard the shrill and excited “killy, killy, killy” call of an American kestrel. I looked up to see the tiny falcon kiting. Suddenly, a Cooper’s hawk was rousted from its hiding place. The kestrel dove and attacked the larger raptor.

Large insects flew short distances ahead of me before landing on the ground. They were Carolina locusts, a kind of grasshopper, that make crackling sounds in flight. This is called a crepitation. Their grayish-brown color blends well with dry soils. Butterflies and dragonflies were rainbows on wings. Dragonflies and damselflies, fierce predators, feed upon mosquitoes, deer flies, black flies and other flying insects. The two predators operate each of their four wings independently allowing for nimble flights. Damselflies are more slender than dragonflies. At rest, damselflies fold their wings over their bodies, while dragonfly wings are held horizontally. 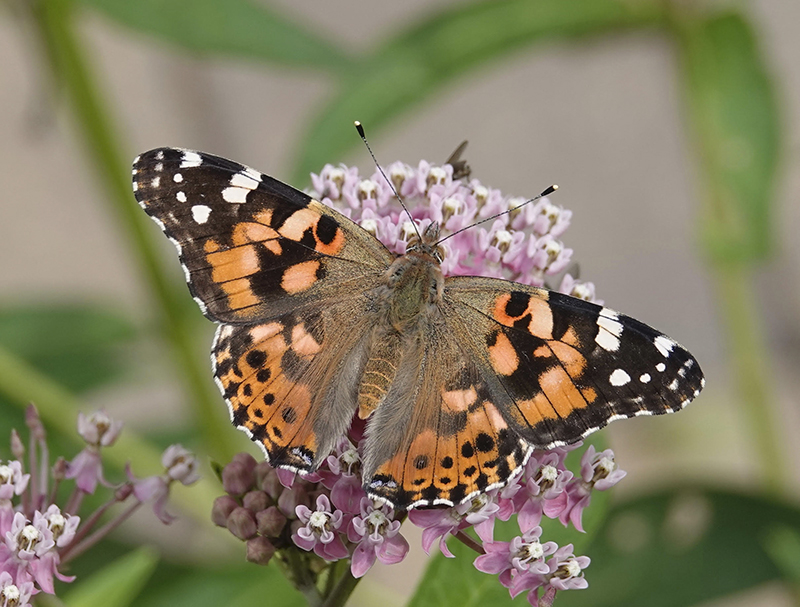 A painted lady butterfly is a thistle caterpillar all grown up. Al Batt/Albert Lea Tribune

“Someone told me feeding jelly to orioles isn’t good for them. Is that true?” There has been no scientific research indicating jelly is harmful. I’ve put out grapes for the birds. They prefer grape jelly. There is no worry that an oriole’s teeth will get any cavities.

“How can I get rid of gnats in the house?” My wife adds three drops of dish soap to a bowl of vinegar and leaves it uncovered to lessen the number of fruit flies and gnats.

“Do warblers use cavities for nests?” Only two North American breeding warblers use a cavity nest: Prothonotary and Lucy’s.

“What are the caterpillars I see on thistles?” Painted lady butterflies lay eggs on the leaves of host plants including Canada thistle, sunflower and soybean. Caterpillars hatch and form webs by tying leaves together with silk, creating a protected area for them to feed. After two to four weeks, they form a chrysalis, which hangs from host plants. The butterfly emerges in 7 to 10 days.

“Is the nighthawk a hawk?” The common nighthawk is a member of the taxonomic order, Caprimulgiformes (goatsuckers). These birds were named goatsuckers for the mistaken belief that they sucked milk from goats. Common nighthawks are crepuscular, hunting on the wing at dawn and dusk, opening beaks to reveal cavernous mouths that take flying insects from the air. It’s called a nighthawk because of the way it hawks insects. The “night” part of their name isn’t truly descriptive as they don’t regularly forage at night, but I see them hunting on moonlit nights. They occasionally forage during the day during stormy weather.

1. American goldfinches begin nesting. They wait until thistles and other plants go to seed. You should start seeing the baby goldfinches in August.

3. Snowy tree crickets make sleigh bell-like sounds in evenings. They are known as nature’s thermometer because the rate of their chirping correlates with the temperature. The formula is to count the number of chirps in 13 seconds and add 40 to find the temperature in degrees Fahrenheit.

6. Japanese beetle adults skeletonize the leaves of over 300 plant species. They’re most active in July and August (sometimes late June). They were first found in Minnesota in 1968.

“Argue for your limitations, and sure enough they’re yours.” — Richard Bach

“A bird has a left wing and a bird has a right wing, yet it’s able to fly effectively as long as both wings work well together.” — Al Batt