Known for his excellent storytelling, relentless adhesion to rules and an affinity for a good punchline, C Douglas Hill will be greatly missed. 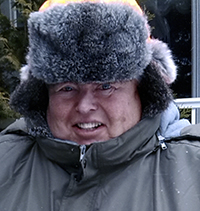 Born in Albert Lea to C Daniel and Ethel Hill on Oct. 10, 1939, C Doug spent his childhood exploring the backwoods of his family’s land, working for the family business and generally giving his parents a run for their money. Some of his early life accomplishments include saving his baby brother from drowning in the creek out back, and evading an early death when he had a close call with some dynamite.

C Doug demonstrated a natural proclivity for fixing and rewiring things early on. His family recalls him once rewiring the family doorbell so he could ring it from the kitchen table. C Doug is a graduate of Dunwoody Institute’s electrician program and worked as an electrician for Gordon Electric. He co-owned Albert Lea Electric, after which he served as supervisor of maintenance at Mayo Clinic Health System in Albert Lea. (His family apologies if he had your car wheel-locked.) C Doug met his sweetheart, Diane, in grade school, where he would present her with his gum wrappers as a token of his affection. They married in 1961 and together have two daughters, Kris Gilbertson (husband, Don) of Albert Lea and Karen Lynn Hill of Texas. Grandchildren are Dayna Rasmussen, Noah Hill, Jessie Gilbertson and Heather Gilbertson. He will also be missed by his sister, Kay (Hill) Grotenhuis (husband, Paul); brother, Paul Hill (wife, Judy); brother, Jim Hill (wife, Joann); and his buddy, Duane Petterson.

C Doug enjoyed spending time with his family and friends on his porch and entertaining people with his stories while sharing his famous grilled chicken or secret recipe baked beans. When telling a particularly good joke, he would get a sparkle in his trademark blue eyes. C Doug also enjoyed being in nature — going on hunting trips to Wyoming, fishing with his grandchildren and mowing his lawn.

C Doug would attend breakfast daily with fellow grumpy old duffers. He was especially proud of his beautiful, deer-proof vegetable garden which he planned, maintained and harvested using various machines. C Doug was highly skilled at driving anything with a motor, particularly his skid loader.

A celebration of life will take place from 5:30 to 8 p.m. Thursday at Bonnerup Funeral Service in Albert Lea. The family invites those who knew him to come by and gather to share stories, memories and friendship as they celebrate C Doug.