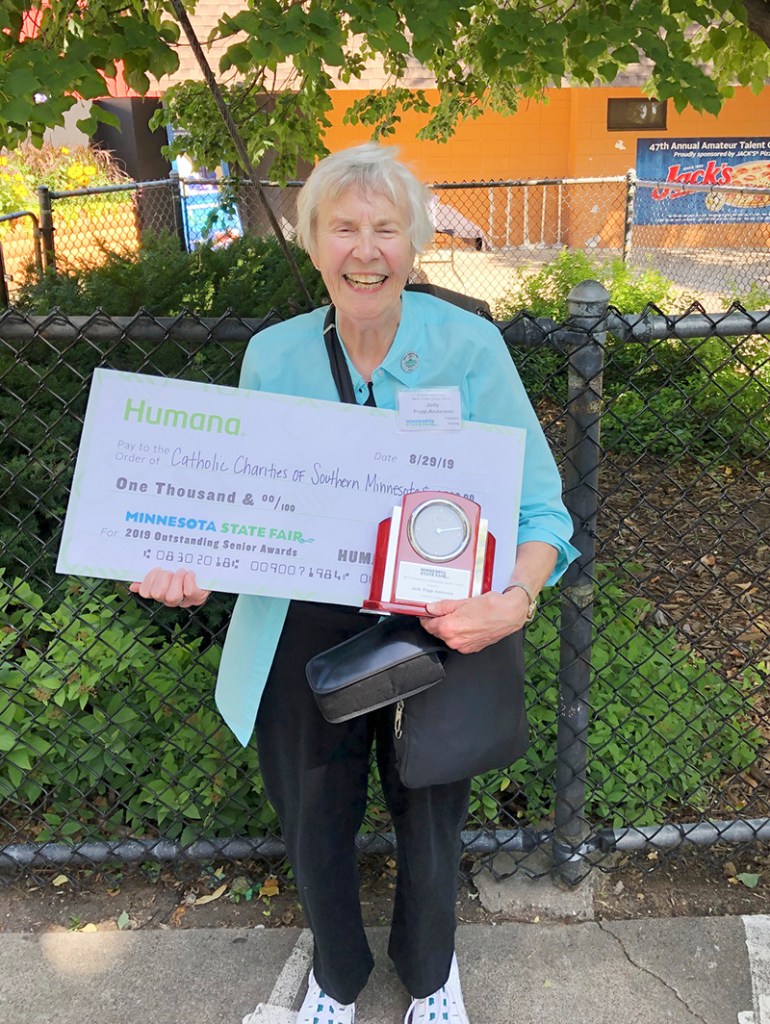 Judy Popp-Anderson was named the 2019 Outstanding Female Senior Citizen of the Year Thursday at the Minnesota State Fair. - Provided

Freeborn County resident Judy Popp-Anderson, a longtime clinical social worker, alcohol and drug counselor, and volunteer, was named the 2019 Outstanding Female Senior Citizen of the Year on Thursday during a ceremony at the Minnesota State Fair.

When interviewed Thursday evening, Popp-Anderson said she never imagined in her “wildest imagination” that she would win the award.

“I’m very humbled, very grateful,” she said. “I really don’t see it as me. I see all the wonderful people who have been in my life … and walked with me and shared their lives with me. I feel so blessed by all that.”

Emcee Tim Dybevik described Popp-Anderson as “someone who volunteers with purpose and dedication and is committed when people need it most.”

Dybevik said Popp-Anderson has devoted her life and career to helping others, spending more than 40 years working in various areas of behavioral health care and currently working part time as a grief counselor for Bonnerup Funeral Service in Albert Lea.

He said her service extends well past her assigned working hours, however.

Since 2015, she has hosted an International Survivors of Suicide Loss Group event each year, where she leads an educational program and facilitates a group discussion on grief for those coping with the loss of a loved one to suicide. She also provides counseling and support for people through Relay for Life, Mayo Clinic Hospice grief support, Freeborn County Crisis Response Team and the cancer support group.

In addition, she runs St. Theodore Catholic Church’s Rite of Christian Initiation program and provides other services at the church and school.

Popp-Anderson said her life of service began in high school when she was on a retreat. She remembers someone saying, “Whatever you do, you do for (Jesus) Christ.”

“That has always stuck with me,” she said.

She noted she grew up with a caring family and had other generous people around her over the years.

“I love being with people,” Popp-Anderson said. “I love listening to people. I’d rather listen than talk, and just sharing each others’ journeys has been so rewarding.”

No matter who it was she helped, she said she was inspired to see the people grow, succeed and overcome obstacles.

“If you can help someone have a more meaningful life or even a tiny part, I think I get more rewards than I ever give,” she said.

She said she is grateful for the community in Freeborn County, where so many people are generous with their time and talents.

As part of the recognition, Humana will donate $1,000 on behalf of Popp-Anderson to Catholic Charities of Southern Minnesota.