Giving back at a young age 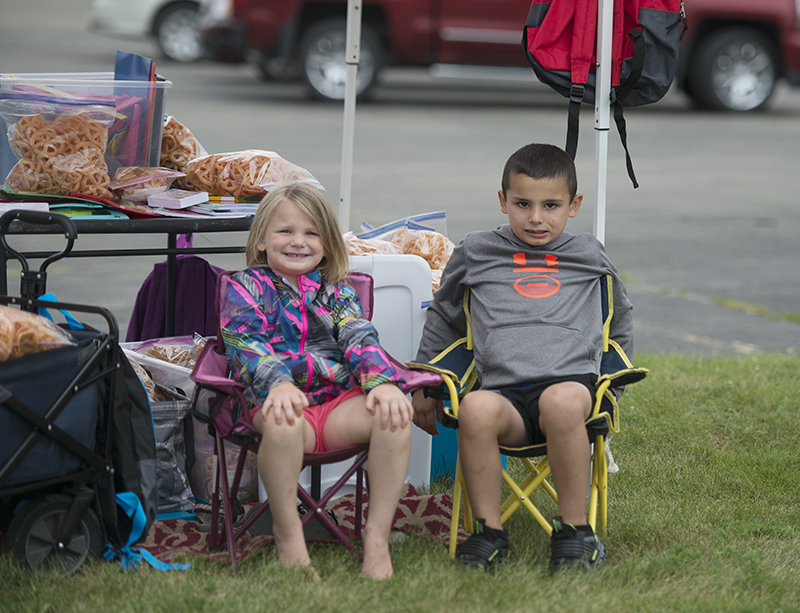 Chloe and Aiden Quezada sit in front of their homemade chips stand outside of Sibley Elementary School. So far, Aiden Quezada has raised over $522 to be donated back to the community in the form of school supplies. - Tyler Julson/Albert Lea Tribune

Boy sells homemade chips to fundraise for children in need

When most children are preparing for the upcoming school year, most are concerned with what new clothes they are going to wear or the coolest new gadgets they can find in the school supplies section at the store. However, that wasn’t the case for Aiden Quezada, an incoming first grader at Sibley Elementary.

Once Aiden Quezada had his school supplies for the year, he was concerned that one of his friends from kindergarten would not have the means to get the supplies he needed. At the suggestion of his mother, Jackie Quezada, to do something to help, Aiden Quezada thought of the idea to sell the chips his grandma makes to help his friend out.

What started out as a small Facebook campaign, selling quart-size bags for $1 and gallon-size bags for $5, quickly grew into something much bigger. So far, Aiden and his family have raised $522, all of which is either used to buy more chip-making supplies or to buy school supplies, which are donated back into the community.

Ernie Quezada, Aiden’s father, was surprised to see how fast the idea to sell the chips took off.

“It was quite shocking at first,” Ernie Quezada said. “It’s been a humbling experience, seeing my son being able to make a difference in other people’s lives. Hopefully we can keep it up throughout the year.”

Although the school year is just around the corner and the demand for school supplies will take a drop within the next two weeks, Aiden Quezada isn’t ready to quit selling just yet. Even when school is back in session, Aiden plans to keep selling and help out children who are interested in playing sports but can’t afford to pay for registration or equipment.

Jackie Quezada talked about what it is like for her to see her son wanting to give back to the community at a young age.

“It gives me a warm fuzzy feeling inside,” Jackie Quezada said. “Not very many kids, especially this age, help other people and want to help others.”

To keep up with the demand, the Quezadas said they usually make at least 50 bags of chips each week and made 122 bags Tuesday night.

“I’m pretty proud that he wants to do that with his time instead of some of the other things a normal 6-year-old would do,” Ernie Quezada said. “It is hard sometimes, but we’re really proud, of not just him but all of our kids. Chloe helps out with the making and selling, so it’s a little bit of both of them, but we’re really proud.”

Aiden also has a “Pennies for Pens” jar wherever they are selling, in which customers can drop their loose pennies to help support the cause. Aiden and his family plan to set up from 4 to 6:30 p.m. every Wednesday in the parking lot behind MarketPlace Foods across from Sibley Elementary School.