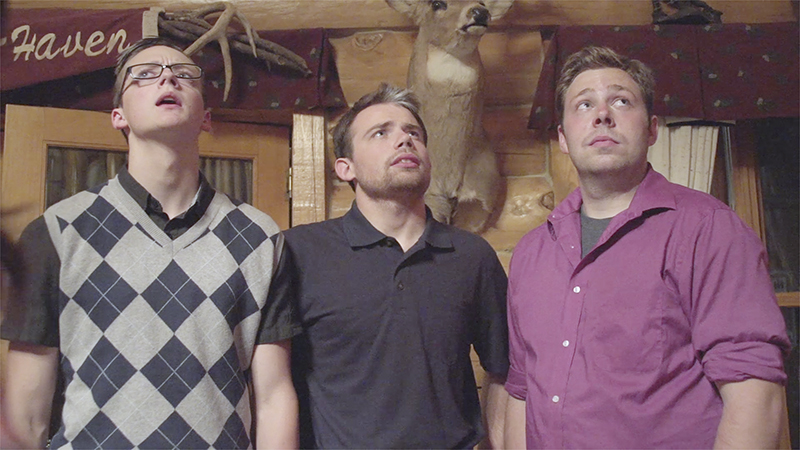 How do you fix a friendship when you kinda say things that maybe you don’t mean?

In “Catching Summer,” Wisconsin native Seth Mecklenburg asks his characters to find out.

Ryerson plays Derek, an introvert who took a job at a gas station while his friends Brad and Fred went off to college. Derek is getting married.

“That’s just basically his life,” Ryerson said. “Some people call it boring, but that’s Derek’s life. He likes it like that.”

But as Derek prepares for his wedding, Brad moves back home with his stepfather and is suddenly free to hang out with the guys all summer, Mecklenburg said. Brad and Derek had grown apart.

Therefore, the movie is “the ebb and flow of these characters being friends again for long periods of time,” Mecklenburg said.

After Brad, center, is fired from his job, Fred and Derek attempt to rekindle their friendship after Brad moves home for the summer. Painting by Breanna Downey

Originally, he sat down with the intention of writing a drama. Mecklenburg said he had just written a play that was a comedy — where the cast members for “Catching Summer” came from — and wanted to switch it up. But he thought about a guy who got fired from his job and didn’t know what he was going to do, and “Catching Summer” was born.

“I just kept writing, and before I knew it, I had most of a script,” Mecklenburg said.

He said he wanted to do a fun movie about something he and his friends were going through. The film turned into a fun way to express themes of friendship. Some components of his actual friendship with Ryerson, whom he met in college at Buena Vista University, are written into Brad and Derek’s relationship.

They premiered the film in Adams, Wisconsin, home of several of the filming locations. Mecklenburg said he would not have been able to make the movie without the community’s help and willingness.

They filmed the movie over six weeks in 2016, Ryerson said. The schedule was condensed as Connor Downey, who plays Fred, was preparing to ship out with the Marines at the end of July.

The movie is rated R for language and some drug-related jokes, Ryerson said. He compared the content to something you might see on HBO.

For Mecklenburg, the movie was a chance to move away from Hollywood’s portrayal of the Midwest and the Minnesota accent. Most of the time, he said, Hollywood likes to play the Midwestern caricature up for laughs. But Mecklenburg said there are different varieties of life anywhere, and especially in the Midwest.

Hollywood is the outside looking in.

“It was kind of fun to go from the inside and try to show it out,” he said.