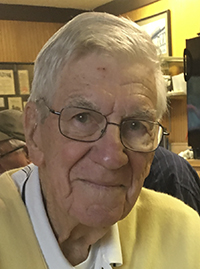 Born in Albert Lea, Roger graduated from Albert Lea High School and Macalester College in St. Paul in 1950. He began teaching in Herman and finished his teaching career at Hopkins High School. Roger was an U.S. Army veteran, who served in World War II. He was an avid golfer and fisherman, and enjoyed time spent over coffee with friends.

He was preceded in death by his loving wife, Mary.

He is survived by his daughter, Jane; son, Bill (Penny); grandchildren Craig and Laura; and brother, Howard.

Memorials are preferred to the Kidney Foundation or Heart Association, or to the donor’s choice.