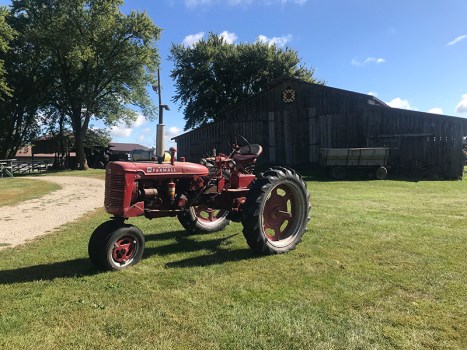 Tractors from the late 1910s to 1940s are displayed and sometimes participate in the equipment parade at the Farming of Yesteryear festival near Kiester. - Kelly Wassenberg/Albert Lea Tribune 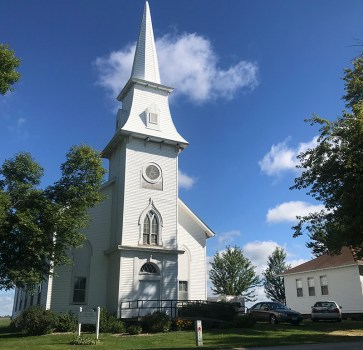 Lime Creek Lutheran Church was originally built outside of Emmons in 1874. The church was moved to the Farming of Yesteryear site in 2003. - Kelly Wassenberg/Albert Lea Tribune 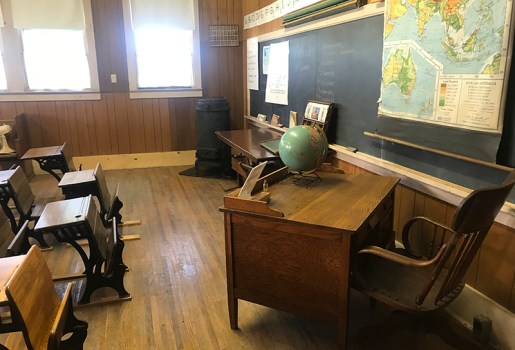 Eden Township No. 2's one-room school house was moved from its home in Winnebago County to the Farming of Yesteryear site in August 1995. Prior to being moved to the site, the building was also used as a township hall and community center. - Kelly Wassenberg/Albert Lea Tribune 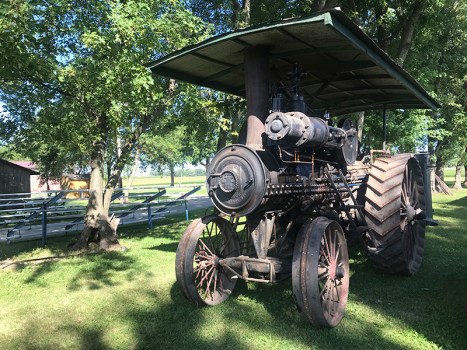 A steam-powered engine will be one of the pieces of machinery on display during the Farming of Yesteryear festival near Kiester. - Kelly Wassenberg/Albert Lea Tribune 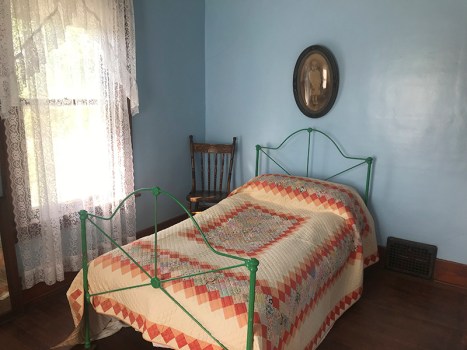 Rooms in the farmhouse at the Farming of Yesteryear site are set up like they would have been when the house was built in the early 1900s. - Kelly Wassenberg/Albert Lea Tribune 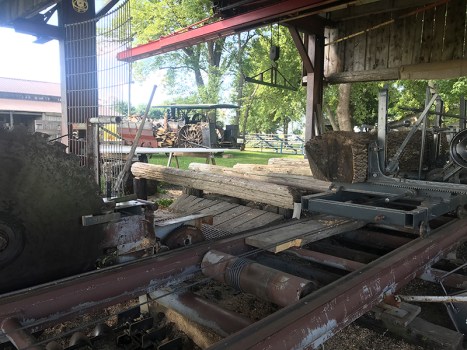 Many old-fashioned pieces of machinery have been brought to the 18-acre farm purchased by the Gopher-Hawkeye Power Association, which hosts the annual Farming of Yesteryear event. - Kelly Wassenberg/Albert Lea Tribune 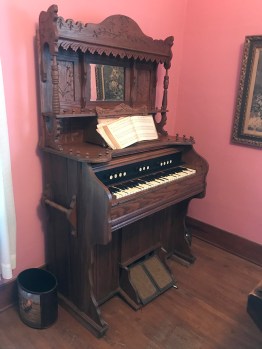 Many items at the Farming of Yesteryear site were donated to the organization, including this antique organ. - Kelly Wassenberg/Albert Lea Tribune 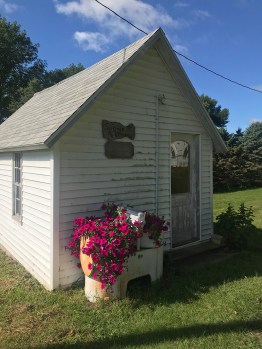 The Farming of Yesteryear site is the home of over a dozen buildings, including a country store, blacksmith shop, one-room schoolhouse, a farmhouse and this summer kitchen. Summer kitchens were popular during the warmer months when cooking stoves would have added excessive amounts of heat to the home. - Kelly Wassenberg/Albert Lea Tribune 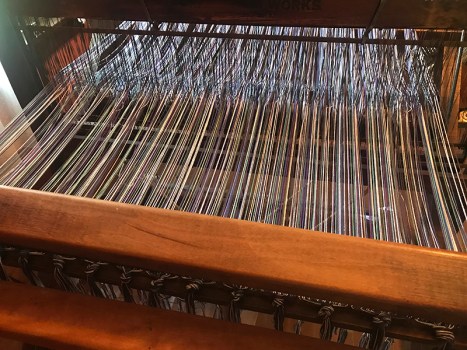 An antique loom will be on display at the Farming of Yesteryear festival, and demonstrations will be given as well. - Kelly Wassenberg/Albert Lea Tribune 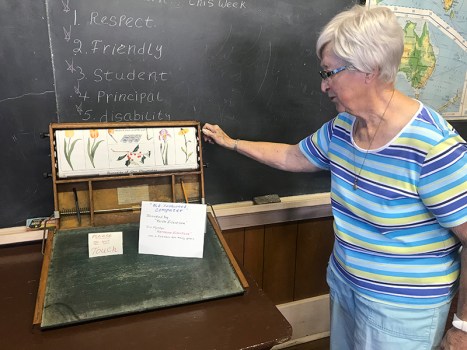 Lois Benson demonstrates how to use a device that is referred to as an old-fashioned computer by Farming of Yesteryear volunteers. The unit was donated by Keith Eilertson of Austin and was once his mother's. - Kelly Wassenberg/Albert Lea Tribune

KIESTER — Lime Creek Lutheran Church from Emmons and a one-room school house from Eden Township in Winnebago County are just a couple of sites to be seen at the Farming of Yesteryear Festival outside of Kiester this weekend.

The festival is sponsored by the nonprofit Gopher-Hawkeye Power Association, a collective gathering of smaller tractor hobby groups from southern Minnesota and northern Iowa that have merged into a larger entity.

According to Keith Kyle, the group’s secretary, the festival is the nonprofit organization’s major fundraiser of the year and helps it maintain a property that is home to buildings including a sawmill, a country store, summer kitchen and farmhouse, among other facilities.

The structures are there to help preserve the memories of rural agricultural communities and familiarize the next generation with the farming traditions of the past. Several other exhibit and demonstration areas can be found outside during the event, as well.

According to Gopher-Hawkeye Power Association co-President Bryan Linder, this includes threshing demonstrations with oats that have been cut and bundled in advance. These bundles are comprised of a grouping of about 20 plants that are tied together with a thin piece of twine and left out in the field to dry out. Loads of the bundles will be brought to a demonstration area, where they will be tossed into a threshing machine powered by a steam engine. The threshing process will then separate the oats from the straw.

Sorghum pressing will also be done this year. The process consists of taking the plant, which resembles a cornstalk, cutting it down at the base and running it through a press that squeezes all the juice out of it.

“It’s basically very diluted sugar. You cook that down and make what’s called a sorghum molasses,” Linder said. “That’s what was used many years ago as a sweetener — instead of sugar.”

Kyle noted there will be demonstrations related to careers of the past as well.

While many think of blacksmiths as shoeing horses, it most often was not the case. While the iron workers would make shoes, it was up to a farrier to put the shoes the blacksmith made on the horse. A blacksmith’s job was much broader than many realize, he said.

“They were the manufacturers in the community,” he said, noting they made many useful items, including tools, door hinges and nails. Those who attend the festival will be able to witness this firsthand.

Not all the activities of the festival are centered around farming, though. Linder said the organization makes it a point to host events for the whole family.

Live musical guests are scheduled to play throughout the festival, including the Bee Kays, who play old and new country; Somethin’ Country, who will play at Saturday’s barn dance; Chris Von Arx, who plays classic country; and gospel and bluegrass group Homespun. Seating is limited, so those in attendance may want to bring their own chairs, according to Melissa Michaelis, who is in charge of the festival’s food, crafts and agricultural product vendors.

This year’s festival will feature a petting zoo and a state-sanctioned pedal pull and fun run for children, which Linder described more like a scavenger hunt than a race. Children will be able to get stamps for visiting different stations, which will make them eligible for prizes. The event is being done this year in memory of Jason Niebuhr of Wells, who died last month in a car accident.

Niebuhr, 39, was described as a faithful member of the Gopher-Hawkeye Power Association by Michaelis.

“He came religiously to our meetings,” she said.

Linder has many fond memories of Niebuhr, too. He noted Niebuhr volunteered throughout the weekend each year to help out whereever he could and to give rides on his 1946 B John Deere tractor. Linder noted the tractor had been fitted with a bus seat, which would allow someone to sit next to him and help guide him, as Niebuhr had lost his sight when he was 2. Since the tractor didn’t go too fast, Niebuhr could safely drive the tractor in the parade and often give people rides with someone telling him if he needed to turn a little to the left or right.

“He had more motivation than most sighted-men,” Linder said. “He’s gonna be missed.”