Filling a void while supporting a good cause 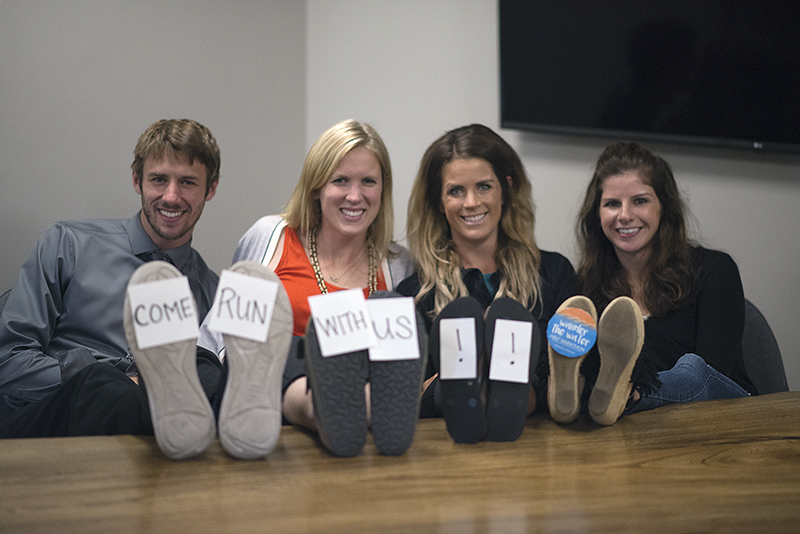 Ryan Peterson, Abby Leach, Amy Leach and Kristin Bergdale are four of the organizers for the upcoming Wander the Water Half Marathon. The marathon has around 80 participants already registered and around 100 expected on race day. - Tyler Julson/Albert Lea Tribune

Over two years after the final April Sorensen Memorial Half Marathon, Albert Lea residents will once again have the opportunity to challenge themselves in a long-distance run.

The first annual Wander the Water Half Marathon is scheduled to start at 8:30 a.m. Sept. 28 and features a scenic route around Fountain Lake.

Along with bringing a distance running event back to Albert Lea, event organizer Abby Leach said the main goal of getting the half marathon in the works was to provide a way to draw in people from outside Albert Lea and showcase the city.

“Most people who run in Albert Lea have to go somewhere else to run races,” Abby Leach said. “So filling that void that the April Sorensen race had, but also having a race to showcase the lakes were big reasons. Most of the routes I have ran try to showcase some of the pretty parts of town, but a lot are out in the country. We’re spoiled here with the sidewalks, paths, Blue Zones projects to support the run, and the city has stepped up to try and make that a focal point. I think that’s something that will help draw outsiders in.”

Abby Leach, Amy Leach, Kristin Bergdale, Ryan Peterson, Kristin Overland, Nikki Schumaker and Nick Schiltz are the core group of organizers who have worked with the city to set the event on track.

So far, the sponsor support and interest in the event has been fantastic, according to Amy Leach. The number of participants registered so far is around 80, and they expect the number to rise to 100 by race day.

“We had our meeting in July and wanted to plan the event for next year,” Amy Leach said. “Then our group was like, ‘Well, lets just see if we can get a route organized. Let’s see if we like it. Let’s see if people would actually participate and see if this is something we want to do,’ and this is where we’re at now. If we have roughly 100 people by the time the race starts, looking at what this could possibly be, it could be pretty cool.” 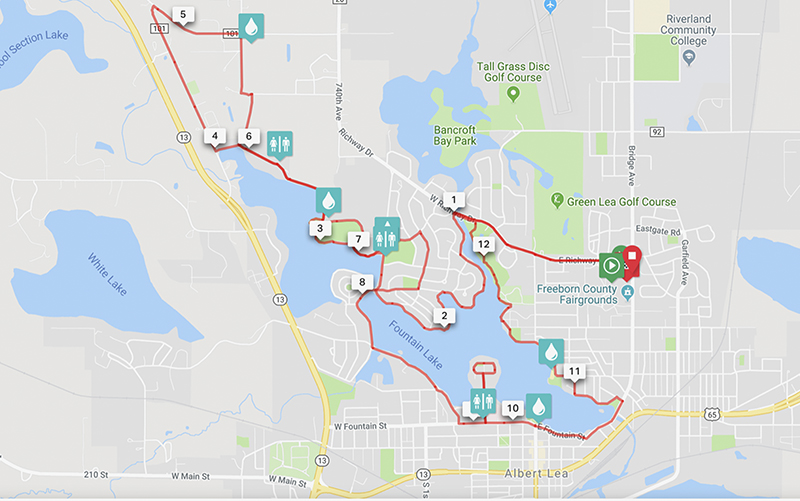 This map shows the route of the Wander the Water Half Marathon taking place Sept. 28. Participants will both start and finish at the Freeborn County Fairgrounds. – Provided

Runners from Albert Lea, Lake Mills, Minneapolis and other small communities have signed up for the race, and Abby Leach said she hopes the word spreads even further.

Runners and walkers alike are invited to register for the event all the way up to the day of the race. There is also a relay option where teams of two or four can split the half marathon.

Participants can register ahead of time through a link on the Wander the Water Facebook page or on wanderthewatermn.com.

After the race is over, participants and the public are invited to attend the Fall Fest in front of 112 on Broadway, which will include food vendors, live music, children’s activities, yard games, a beer wagon and a beer mile competition.

“112 on Broadway wanted to have an Oktoberfest celebration,” Bergdale said. “They wanted a street dance and a super fun event. There was a group of us that came to them and said, ‘The race is happening and you want to have your event, so let’s just combine them together and make this a celebration.’ We’re really excited to put that on.”

The United Way will also join in the fun with Dein United around the same time.

Even if you’re not a runner, Abby Leach said to come out along the race route to watch and cheer on the participants. She said many people have a fear of signing up because they think everyone is going to be super competitive with each other. However, Amy Leach said that’s not the case at all in the running community.

“You’re never there to win,” Amy Leach said. “There’s only one person who is going to win. You’re really there to benefit yourself and to support a good cause, so it’s really benefiting you and the community you’re there to support.”