Former publisher looks back on the community he once served 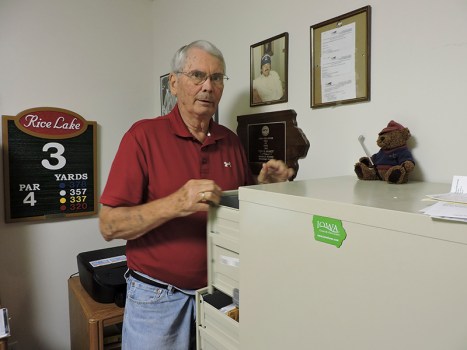 Harris Honsey spent most of his life working to preserve the stories of those in the Lake Mills area. His career with the Lake Mills Graphic included five years as manager and 35 years as the publisher. He still has filing cabinets at his home office full of research he did during his many years at the newspaper. - Kelly Wassenberg/Albert Lea Tribune 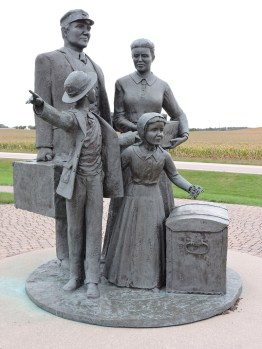 The Norwegian American Immigrant Family Monument sits on restored prairie site on the east edge of Lake Mills. The statue, sculpted by the late Clifford J. Carlson, was dedicated to the thousands of immigrants who settled in the prairies of the upper Midwest in the 1800s. - Kelly Wassenberg/Albert Lea Tribune 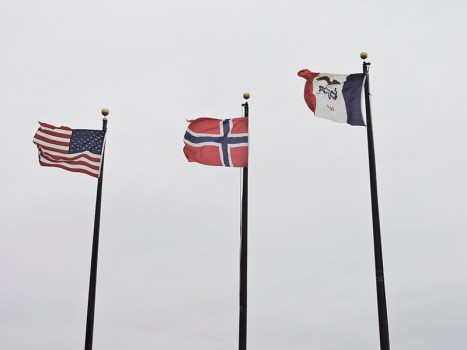 The flags of the United States, Iowa and Norway fly over the site of the Norwegian American Family Monument in Lake Mills. - Kelly Wassenberg/Albert Lea Tribune 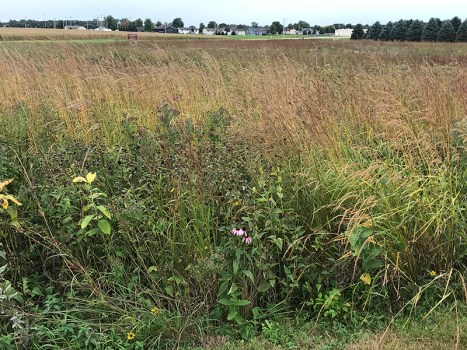 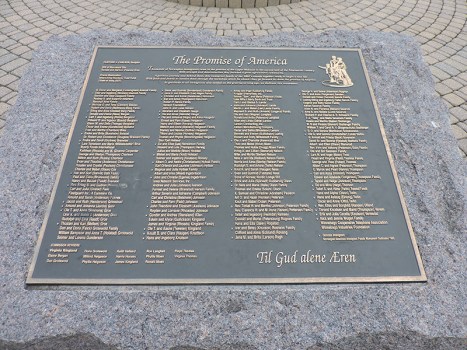 The memorial plaque at the Norwegian American Immigrant Family Monument reads, “Thousands of Norwegian immigrants came to the prairies of the Upper Midwest in the second half of the Nineteenth Century. With strength and determination they founded a great agricultural community. A perilous journey now behind them, this immigrant family of the 1800s stands together ready to begin a new life. With faith and family to sustain them through the hardships that lie ahead — they go forward to claim the promise of America. In gratitude to all immigrants who settled on the prairies so long ago, we dedicate this monument.” It also lists the names of the contributors who made the monument possible. - Kelly Wassenberg/Albert Lea Tribune

LAKE MILLS — Harris Honsey of Lake Mills was at a loss for words when asked about the people of the community he calls home — which may seem ironic for a man who worked at the Lake Mills Graphic for almost half a century.

He continued at the business full-time after graduating from Lake Mills Community School, with the exception of two years he spent serving his country as a member of the military police in Washington, D.C.

“The centennial edition was my last effort for my boss,” Honsey said.

His success on the project earned him first place honors from the Iowa Newspaper Association special section category.

Honsey was also honored in the community service category for his contributions to the Homecoming ’86 program that took first place in the statewide betterment competition and received the Master Editor Publisher Award in 1989.

The community was hit with a setback when one of its largest employers, Cummins Filtration, announced the layoff of 400 employees in 2009. The plant closed shortly after, but the community of Lake Mills made it through, and for good reason.

“We’ve been blessed with good people,” Honsey said, noting he feared naming them all out of fear he would leave someone out.

Honsey said Lake Mills is the type of community that if one of the farmers in town has a problem and cannot manage his farm, other farmers would gather a dozen combines, tractors and trailers and harvest for them or their widow.

Honsey also noted the generous spirit of the people of Lake Mills, which has resulted in many projects being done through community donations.

One such project was the Norwegian American Immigrant Family Monument.

According to articles in the Lake Mills Graphic archives, a project committee started to raise donations for the statue in March 1994. Those who donated over $500 to the project received a print of a painting the group had commissioned to be made once the statue was erected. Those who gave $1,000 or more would have their name placed on a plaque near the monument. Various fundraisers took place as well as contributions from different organizations.

The monument honors the Norwegian ancestry many early Lake Mills residents shared. In the town’s infancy, most of the population was from Norway while there were smaller pockets of English or Irish ancestry.

The Norwegian American Immigrant Family Monument, dedicated in 1995, is located in a 6-acre park at the edge of Lake Mills, which was donated by Ronald and Darlene Groe. The life-size bronze sculpture by Clifford Carlson depicts a 1860s era Norwegian family with their travel trunk. The son points off into the distance of the new land they have come upon while glancing back at his parents. His younger sister looks ahead with astonishment.

According to a marker at the site, the grasses represent the view many early settlers would have seen when they arrived in the area.

The monument is dedicated to the thousands of immigrants who made the dangerous journey across the sea to begin a new life,  in hopes of finding the promise of America.

Many descendents of those early settlers still live in the area. Those of Norwegian ancestry who donated or who had someone donate in memory of them have an asterisk by their names.