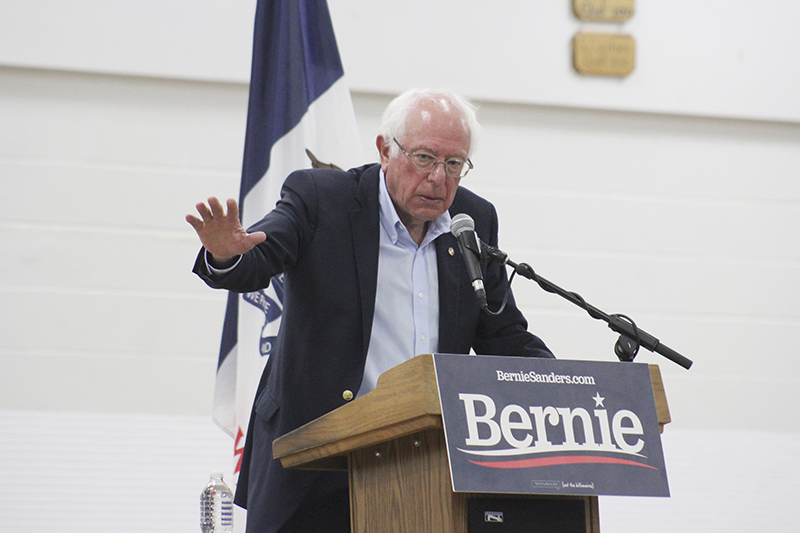 NORTHWOOD — Democrat, U.S. presidential candidate and Vermont Sen. Bernie Sanders took the public back to school Monday, asking the audience of both Northwood-Kensett High School students and the public to provide definitions and answer questions about wealth distribution, health care and college costs during a stop in another trip to Iowa.

Sanders stopped in Northwood Monday and spoke to approximately 150 members of the public and a large portion of the high school student body in the high school gymnasium. He focused on common touchpoints in his 2020 campaign: health care, wages, climate change and free college education.

He asked audience members — students specifically — about what it means to live paycheck to paycheck, why wealth inequality is not discussed by the media and whether or not health care is a human right. The reaction to the latter was mixed.

Sanders said he would focus on negotiating prices with pharmaceutical companies to lower the cost of prescription drugs; fund a Medicare-for-all program out of the general tax base without premiums, copayments or out-of-pocket expenses; and push for a Medicare system that covers home health care, eyeglasses, dental and hearing aids.

Dale Thrond of Northwood, a former government teacher, said he has had a lifelong interest in political affairs and appreciated the clarity he said Sanders provided on health care.

“You know where he stands,” he said.

Both Dale and Kathy Thrond said they are Democrats who are currently uncommitted to a presidential candidate. 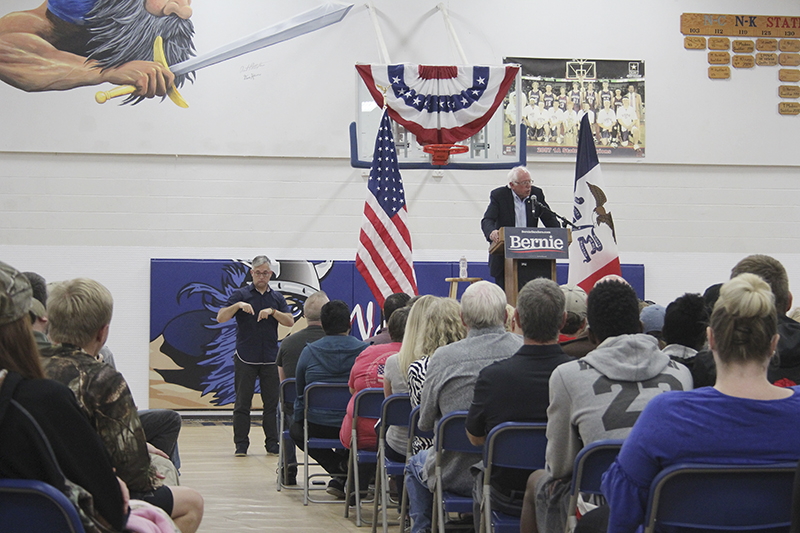 “At the end of the day, what we have got to do is, as a nation, lay on the table what our problems are and then figure out how we go forward,” Democratic presidential candidate Bernie Sanders said Monday during a visit to Northwood. “And for the younger people in this room … the future of this country is increasingly going to rest on your shoulders. And I hope very much — and I know — that you will accept that responsibility.” – Sarah Kocher/Albert Lea Tribune

Sanders congratulated Iowans for the state’s contribution to wind energy and said the country needs to move “more aggressively” to wind, solar, geothermal and other energy sources.

The presidential candidate also asked students if they were afraid of the cost of going to college. He said the country needs to talk about free public education reaching past 12th grade and making public colleges and universities tuition-free.

“We have to expand Pell grants and work study programs so that every young person in this room and in this country can go to college or to trade school regardless of the income of your family,” he said.

While Republican-identifying Northwood-Kensett junior Ruthie Conlin said the questions Sanders asked the audience made her think, she and fellow student Clara Davidson, a senior, were skeptical of how his policies would work. It sounds nice to dedicate money to these initiatives, Conlin said, but in practice?

“Where does the money come from that we’re spending?” Davidson said.

Davidson said she was also concerned whether a $15 federal minimum wage, also backed by Sanders, would negatively impact small businesses in Northwood that she worried would not be able to afford it.

But whether or not they agreed with his policy, the opportunity to see a presidential candidate at their school was a draw for students, Conlin said.

“It was pretty neat that we got this opportunity as a small school for a big politician to come in and talk with us,” Davidson said.

Students were given the option to attend, Superintendent Michael Crozier said, and those who did not could go to study hall.

Sanders encouraged students to get involved in the political process.

“At the end of the day, what we have got to do is, as a nation, lay on the table what our problems are and then figure out how we go forward,” he said. “And for the younger people in this room … the future of this country is increasingly going to rest on your shoulders. And I hope very much — and I know — that you will accept that responsibility.”