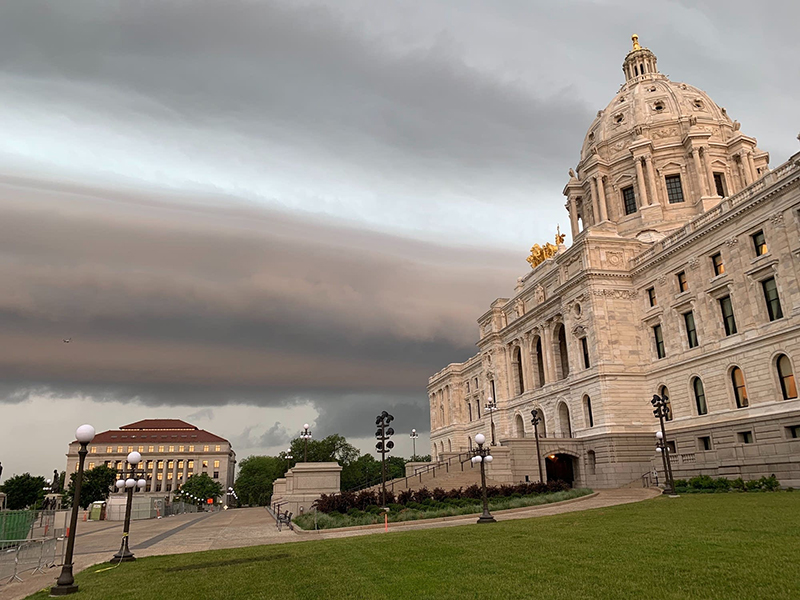 Bargaining between Gov. Tim Walz’s administration and large public employee unions produced new two-year contracts. While the unions have signed off, state legislators have yet to weigh in. - Andrew Krueger/MPR News

The two-year agreements struck this summer have received little public attention ahead of successful ratification votes by members of the two dominant employee unions. They await signoff from the Legislature, with a process that should begin sometime this fall.

All state workers are in line for a 2.25 percent raise this year and 2.5 percent next year. Some employees also qualify for “step progression” increases if they’re not at the top of their pay scale.

Negotiators for the Walz administration reached the separate accords with the American Federation of State County and Municipal Employees Council 5 and the Minnesota Association of Professional Employees. Combined, the unions represent more than 30,000 state employees — everyone from snowplow drivers to zookeepers and lab analysts to IT specialists

Walz said Wednesday that his team bargained in good faith and shared the goals of the employees across the table.

“They certainly know where our values are. I certainly believe a living wage is something we talked about greatly,” Walz told reporters. “I do believe in public service.”

Officials with the Department of Minnesota Management and Budget say they can’t talk in detail about the pacts or their fiscal impact until details are forwarded to the Legislature.

Negotiations over their new two-year contracts were seemingly smooth and surprisingly quiet.

Labor-friendly Democrats in the Legislature, such as Duluth Sen. Erik Simonson, remain in the dark.

“Normally I would hear something from somebody on one side or the other,” Simonson said. “But now that I think about it, I haven’t heard a word from anyone.”

Members of both unions ratified the contracts in votes held last month.

The Minnesota Association of Professional Employees posted its tentative contract online. MPR News obtained a 20-point summary of the AFSCME agreement through a rank-and-file member; the union kept the contents of the contract behind a members-only page.

Members of the Minnesota Association of Professional Employees earn an average of $33 an hour now, meaning this year’s base raise boosts that hourly rate by about 75 cents, or $1,560 in year one.

Simonson sits on a House-Senate legislative panel that will consider the contracts. He said the base raises sound fair.

“Any wage increases in the area of two and three percent right now, the way the economy is, seems to be where I would call the norm,” Simonson said. “So, I don’t think it’s outside the scope of what’s reasonable.”

Employees who belong to both unions will see their health costs rise a bit.

Premiums for workers covering just themselves will go up $2.60 per month next year and a tad more the year after. For family coverage, the monthly jump is just shy of $18 in 2020 and about $19 for 2021. Various copays also go up, but there are improvements to dental and vision offerings.

Lina Jamoul, executive director for the Minnesota Association of Professional Employees, said the agreement represents a cost-of-living bump for her union’s 15,000 members.

“This contract is modest. It’s fair,” she said. “And we hope it doesn’t get caught up in the partisan dynamic that is going on right now.”

With an even divide on the committee this year, a deadlocked vote is possible. If that happens, the agreements would go into force pending a vote of the entire Legislature in 2020.

“With one party controlling one chamber and the other the opposite, I would not be a bit surprised to see that this drags out as long as possible,” Simonson said.

Sen. Michelle Benson, R-Ham Lake, also serves on the 10-person committee expected to meet this fall for the initial review. She’s waiting on a rundown of the contract costs before deciding how to vote.

“There shouldn’t be contracts that exceed the current budget. There should be no need for a supplemental budget based on these contracts,” Benson said. “Everybody knows how much is available. And that should be the limit.”

Benson said it’s important to get a handle on more than just paychecks because fringe benefits can drive up the cost.

“Merely looking at wages doesn’t give us a whole compensation picture,” she said.

There are notable features in both contracts.

“I know that the $15-an-hour provision might seem symbolic,” he said. “But I think often times in government when we see there is a going to be a change we see the state do it first and then we see it elsewhere.”

The Minnesota Association of Professional Employees agreement expands sick-leave policy to allow use of time to care for adult children, grandparents and grandchildren and other close relatives.

Changes to recruiting and retention incentives include a broader student loan repayment program of up to $5,000 per year for five years. The state currently has a limited program for certain Department of Human Services employees where finding workers has been tough, but the new contract would expand it to other agencies.

MAPE’s Jamoul said it should pay off for the state through reduced employee turnover.

“When we surveyed our members they had like the rest of the country, little confidence that they’ll be able to pay back student loans,” she said.

The union isn’t sure how many agencies will work the offering into their budgets, but it’s something leaders hope gets applied widely over the span of the contract. Employees who take the reimbursement must commit to remaining with the state for at least a year.

Walz said the loan repayment incentive could come in handy for hard-to-fill jobs.

“It makes sense to have some of these student loan repayments to entice people to come in,” he said.