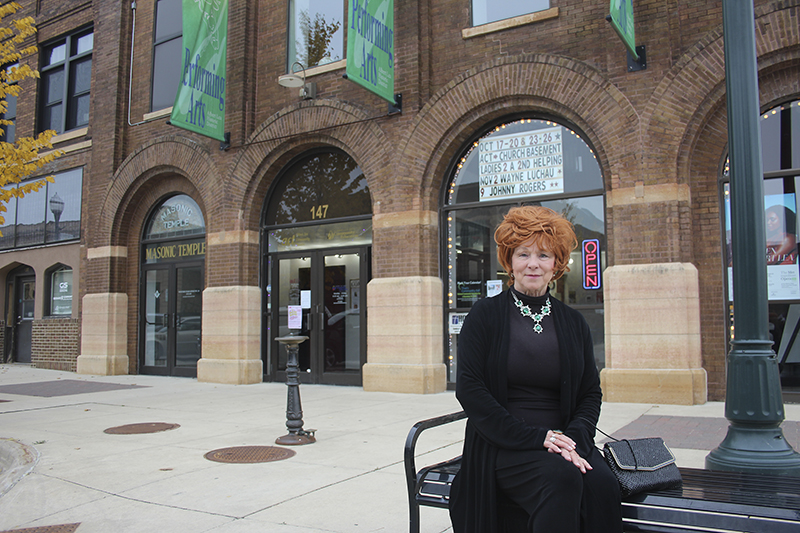 The statue of Marion Ross a committee is fundraising for is intended to find its home in the vicinity of the Marion Ross Performing Arts Center. Joyce Nixon, dressed as Marion Ross, poses for a photo in the outfit she used Wednesday to share information about the statue committee and donating. The statue would be of Marion Ross sitting on a bench. Sarah Kocher/Albert Lea Tribune

Marion Ross may call Albert Lea a more permanent home if a group of community members are successful.

The Marion Ross Statue Committee (or MRS C, after Marion Ross’s character on the ’70s TV show “Happy Days”) is fundraising $125,000 to erect a bronze statue of Ross, an actress who claims Albert Lea as her hometown. In addition to playing the beloved Mrs. Cunningham in “Happy Days,” Ross has also made appearances in “Gilmore Girls” and as the voice of SpongeBob SquarePants’ grandmother.

For the statue to be a success, the committee needs to remind people of these other roles that have spanned her career, committee member Pat Mulso said.

“We need to reach the people that maybe are young, younger and don’t realize her fame in ‘Happy Days’ but might relate to a Hallmark movie or some other thing that she has done,” she said.

It will depict Marion Ross sitting on a bench with her arm resting along the top of the bench, so people could sit down beside her for photos.

“I think that would be really neat,” Mulso said.

While Mulso said they hope to raise the $125,000 — which includes the statue’s creation, delivery and base for it to sit on — by spring, fellow committee member Kari Brick does not have a hard deadline.

“We’re just gonna keep going until we get it,” she said.

Brick said the statue is a good way to promote the town and its claim to fame: “that Marion came from Albert Lea, Minnesota.”

So far, the committee has raised a little over $6,000, largely through grants but also by private donation. It is entertaining more grant opportunities but also seeking more community support. 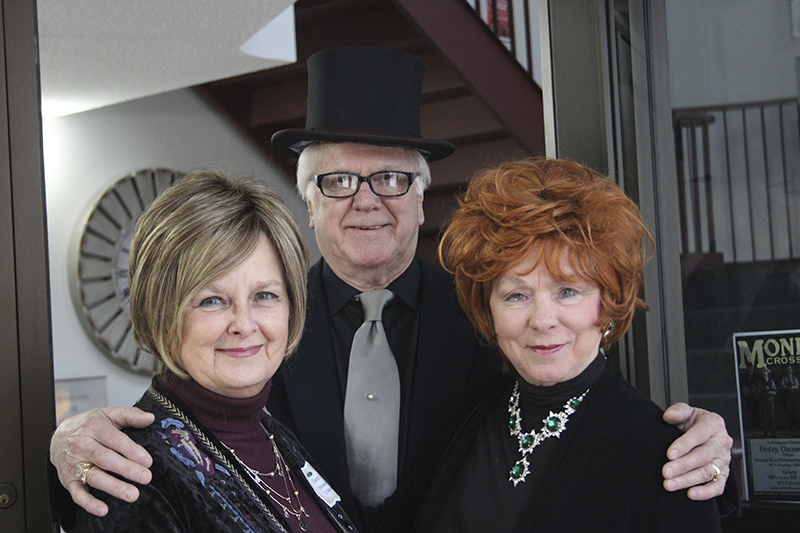 Miriam White and Neil Lang dress up as members of Marion Ross’ crew while Joyce Nixon plays the role of Marion Ross. Committee members have dressed up to promote MRS C, the Marion Ross Statue Committee that is fundraising to put up a bronze statue of the hometown actress. Sarah Kocher/Albert Lea Tribune

Committee member Joyce Nixon dressed up as Marion Ross, complete with a glitzy green-jeweled necklace she said Marion Ross gifted to her the last time Ross was in town, for ACT performances to promote the cause. Other committee members have also dressed up in Ross-related costumes for the same reason, Brick said.

Mulso expects, once the sculpture is commissioned, for it to take 1 to 1 1/2 years to complete. The committee has narrowed it down to two sculptors: one out of Colorado, and one out of Oregon.

“She hasn’t forgotten her hometown,” Mulso said. “She has supported us and this could be not only an attraction to Albert Lea, but also a thank you to her while she’s still living to know that we’ve appreciated all that she’s done for us.”

Ross, who turns 91 Friday, said in a phone interview that she intends to attend the statue’s dedication.

Those wishing to contribute can make donations out to the Albert Lea Downtown Association 501(c)(3) with the memo “Mrs. C.”