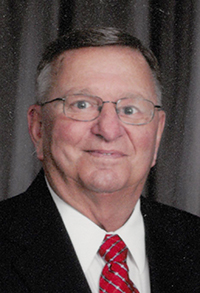 David was born Oct. 16, 1937, to Doris (Nelson) and Walter A. Wolff at his home in Freeborn County. David attended country school and graduated from Albert Lea High School in 1955.  David and Karen (Benson) were married April 11, 1964, in Austin. They had two children — Brenda Lynn and Brian Dean. David was a farmer and was employed by and managed Speltz Grain Elevator in Myrtle. Upon retirement he moved to Austin, where he lived for the last 19 years. David was a lifelong member of Bethlehem Lutheran Church, where he served on the church council and as treasurer. David also served on the London Township board for many years. Anything to do with grandchildren was always on his to-do list. He also enjoyed bowling, riding his snowmobile, tractor pulls and playing cards. He enjoyed celebrating birthdays and New Year’s Eve with the same group of friends for over 50 years.

He was preceded in death by his parents and his sister, Delores Conell, and her twin in infancy.

Memorial services will be at 11 a.m. Saturday at Bethlehem Lutheran Church at 85056 134th St. in Glenville. The Rev. Josh Blair will officiate. Visitation will be from 4 to 7 p.m. Friday at Worlein Funeral Home in Austin and will continue for one hour prior to the service at the church Saturday. Interment will be in Oakwood Cemetery in Austin.

Memorials are preferred to Bethlehem Lutheran Church or the donor’s choice.