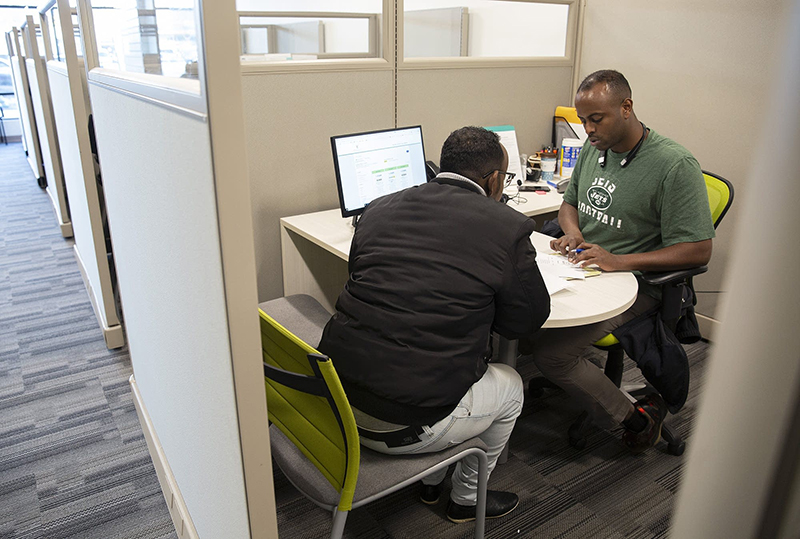 Having open-enrollment headaches? You’re not alone.

Americans are scrambling to pick their health insurance plans. About 70 percent of Minnesotans of working age are eligible for plans through their employers or family members. But that figure has been dropping as fewer employers offer coverage and as the labor market slows.

For those sifting through plans on MNsure, the state’s online health insurance marketplace, selecting a health plan can be especially daunting.

That explains why the waiting room at Briva Health’s Lake Street office was bustling on a recent day with parents, young children and elderly people.

Briva is one of about two dozen navigator organizations that get grants to help Minnesotans sign up for health care plans using certified navigators. It’s been doing this work since the Affordable Care Act’s first open enrollment period in 2013 and has expanded to serve a more diverse clientele. It has multiple offices in Minneapolis and one in St. Cloud.

“A lot of people, as you know, face barriers to accessing health insurance and navigating the health care system,” said Hodan Guled, the organization’s CEO. “Briva Health was founded to kind of bridge that gap and make sure that nobody falls through the cracks in accessing the health care that they need.”

Aside from English, Guled’s staff can speak Spanish, Somali, Arabic, Amharic, Oromo and Urdu. The group also offers a translation service if there aren’t staffers on site who can speak a language that someone needs.

Navigators get the word out about their services at community events, like Cinco de Mayo celebrations. They also acknowledge the barriers that some of their clients might face, such as lack of reliable transportation. Walk-in appointments are allowed, and all of the navigator services are free.

“The whole process of shopping for health insurance and applying and selecting a plan can be complicated,” he said. “That’s why we have this network of assisters around the state who can help.”

Their directory has about 1,600 brokers and navigators across the state. 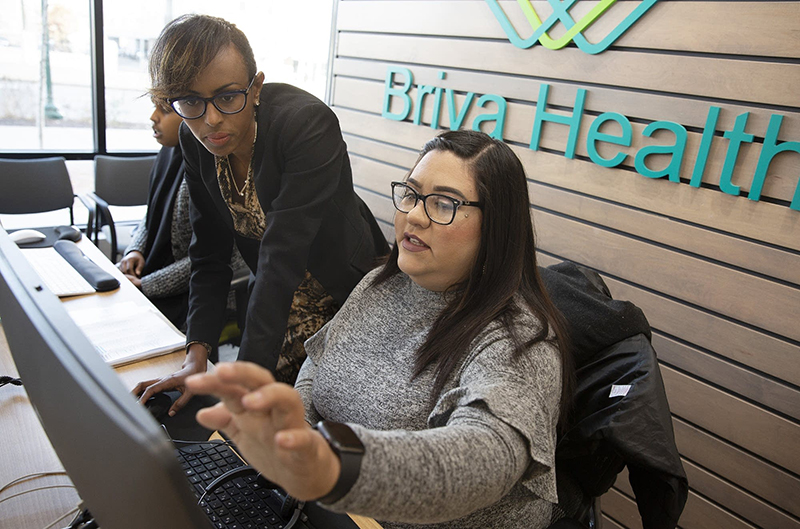 From left, Briva Health CEO Hodan Guled and receptionist Claudia Barnett go over scheduling Friday at their office in Minneapolis. Briva Health navigators help clients with the process of signing up for health insurance plans in the MNsure marketplace. – Christine T. Nguyen/MPR News

Having teams of navigators and brokers that reflect the state’s population are essential to breaking down cultural and language barriers.

Hodan Guled’s brother, Hussein Guled, is one of the navigators at Briva Health. As a Somali-American, he said he’s equipped to help clients from his community, where health insurance is a relatively new concept.

He understands why it can be confusing to pay for certain expenses in advance but still have copays at the time of your visit, and to get other bills after the medical appointment.

He also knows how health expenses can cripple a family’s finances. Roughly two-thirds of bankruptcies in America have some tie to medical bills.

“A lot of people that come to us, to be honest, they come at a time of need,” he said, including people who recently lost their jobs, are sick and suddenly need insurance. “They’re divorced. They had a child. They’re pregnant. Something major is going on in their life and they don’t need this extra headache.”

Part of his job is to tell people about ways to defray their health care costs. A recent survey found that only about 40 percent of Minnesotans who were eligible for tax credits took advantage of them.

Leilani Miles is in the waiting room at Briva Health. She’s 24 and has a young daughter. She recently went to a doctor’s appointment and learned there that she was no longer insured.

She then tried to sign up online on her own, but ran into a roadblock.

“I was just kind of at a standstill,” she said, adding that she would like to get enrolled as soon as possible so she can schedule some additional medical appointments.

This year, every county in Minnesota will have at least two carriers on the marketplace, which means Minnesotans in rural counties will have more options to choose from.

As that date nears, the health care navigators have a simple message: Don’t procrastinate.