Roger Olson, 82, of Zearing, Iowa, passed away Thursday, Nov. 21, 2019, at Israel Family Hospice House in Ames, Iowa. Visitation will be from 1 to 2 p.m. today at Salem United Methodist Church in Hubbard, Iowa. His memorial service will immediately follow the visitation and begin at 2 p.m.. The Rev. Ward Richards Jr. will officiate. Roger will be buried in Buffalo Township Cemetery in Titonka, Iowa, at a later date. 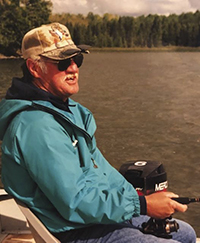 Roger was born in Albert Lea on Dec. 28, 1936, to Elmer and Martha (Jamison) Olson. He was raised in Albert Lee and attended school there, graduating with the class of 1954. Following school he began working as a carpenter, painter, tiler and built water towers. Roger was also a boxer, earning his golden gloves. On Oct. 2, 1971, Roger married the love of his life, Corinne Zweifel-Johnson, in Albert Lee. In 1978 Roger was sworn in as a police officer in Titonka and as a Kossuth County officer reserve. In 1980 Roger took a full-time position as the town cop in Fenton, Iowa, a job he dedicatedly served until he retired in 1994. In those days, not only did he protect the community as the town cop, but he also became the town water man, garbage collector and water works. In 1996 Roger joined Corinne in Zearing and began working at Colo-NESCO as a custodian.

He was a member of Salem United Methodist Church, Iowa Firemen’s Association and Kussuth County Reserve Sherriff Department. He enjoyed fishing, hunting, old cars and being a clown with his Albert Lee clown group.

Fredregill Family Funeral Home in Zearing has been entrusted with the care of Roger and his family.