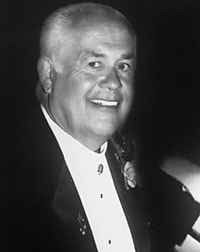 Victor was one of four children of Everett R. Gilbertson and Marie C. Gilbertson. Victor was born in Albert Lea on April 6, 1940. He was a 1958 graduate of Albert Lea High School, where he played for the high school football team.

Victor married Shirley Jenson in 1960 and became father to Shelley, Jeff and Sheldon “Mitch.” He graduated with a Master in Education from Mankato State University. Victor went on to be a teacher, a junior high school principal and eventually took over his father’s business, Commercial Wood Products.

He married Kaydelle Johnson in 1979, becoming a stepfather to Julie and Holly. Later in life he opened Gilbertson Furniture and Spud Burgers. He had a gift and passion for entertaining; many will remember his piano playing for events and celebrations. The Freeborn County Historical Museum has honored Victor with an exhibit for his contribution to entertainment in the area.

Victor will find his final resting place at Hillcrest Cemetery. Donations may be made to the Parkinson’s Disease Foundation at www.parkinson.org or to Alzheimer’s and dementia research at alzheimersprevention.org/.