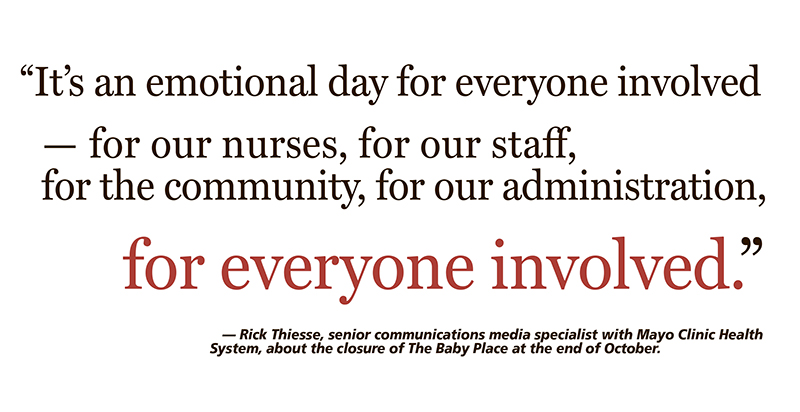 Editor’s note: The news staff selected its favorite quotations from the past year and present them here for you to recall.

“This whole thing is just a terrible tragedy for both sides, for both people.” — Resident Jean Karau at a vigil Jan. 6 for Albert Lean Joseph Alan Roberts, who died following an officer-involved shooting Jan. 3.

“This could happen to me. If I don’t do something, I may not be around. That day I was diagnosed, my doctor said, ‘If you eat another hamburger, you may die.’” — Albert Lea resident Dale Sanchez in January about his decision to start losing weight. He went on to lose 200 pounds thanks to a change in lifestyle and diet.

“This is uncharted territory for all of us. Our government has never been shut down this long, so we are not quite sure what the outcome is going to be.” — Albert Lea Salvation Army case worker Amber Voshell Jan. 15 regarding the longest federal government shutdown in U.S. history.

“This decision is a difficult, but necessary one. In a challenging retail environment, we have had to make some very tough choices, but we are confident that by operating a smaller and more focused store footprint, we will be able to build a stronger Shopko that will better serve our customers, vendors, employees and other stakeholders through this process.” — Shopko CEO Russ Steinhorst in a news release in January announcing the company had filed for Chapter 11 bankruptcy protection.

“These are adults, and they’re adults by law. And if they want to make those poor health choices, then they should have that right.”  — Third Ward Councilor Jason Howland in an Albert Lea City Council meeting Jan. 28 about the city moving forward to raise the minimum tobacco buying age to 21.

“The rationale for providing one option (is) your professional teachers and administrators within the district all recommend an early start for the academic reasons that we have presented. The feedback from conferences, from parents has been nil in the community on a later start versus an early start. I think people have grown accustomed to it, and that’s why we presented just the early start option.” — Albert Lea Area Schools Superintendent Mike Funk during a Feb. 4 school board meeting discussion about the 2019-20 school calendar.

“We’ve lost a giant. He was a huge advocate and champion of our community.” — Albert Lea Convention and Visitors Bureau Executive Director Susie Petersen after the death of Albert Lean Dan Borland in February.

“It’s just really nice to have a brother who likes you right off the bat and you don’t even have to share toys with them.” — Albert Lean Susan Carlson in March after finding out through a DNA test that she had a younger brother.

“The safety of our community is the number one priority of any council.” — Albert Lea Mayor Vern Rasmussen Jr. March 25 after the Albert Lea City Council voted 4-3 to raise the tobacco-buying age to 21.

“Thank you for caring for our students. I appreciate your passion and commitment and believing in students before they believe in themselves.” — Albert Lea Area Schools board chairman Ken Petersen at a ceremony in April naming Hawthorne Elementary School kindergarten teacher Kris Burnett as the 2019 Teacher of the Year.

“It’s been a great 10 years. I feel good about everything that I was able to accomplish with the team and with the staff, and it’s just nice to transition on to another chapter of my professional career and professional life.” — Former Albert Lea Area Schools deputy superintendent Lori Volz in a May 1 article after Volz accepted a new position in Austin.

“I think this is a situation that has been coming over the years … I believe that if we would have been able to discuss it maybe even last year or earlier this year, we could have maybe eased into the process a little bit and included more of the community in the process, and I think it’s just a missed, it’s a missed opportunity in public relations.” — Albert Lea Area Schools board member Jill Marin about the decision to shift boundaries between elementary schools in the district. She said the decision felt “abrupt.”

“I think there was some hesitation on people whether the fishing culture would be as strong as it is up north. I think Albert Lea put that to rest. It certainly is.” — Minnesota Gov. Tim Walz during a community picnic as part of the Governor’s Fishing Opener in May.

“It’s really going to be sad. I don’t think it has hit me yet.” — Albert Lea Shopko employee Jean VanGuilder in May as the closing date for the retail store approached.

“It’s just unfortunate that you trust somebody … that they’re doing what’s best for your daughter and here to find out it’s like OK, they’re just going through the motions.” — Kory Newman, parent of an Alden-Conger Public Schools special education student, regarding a special education state complaint he and his wife filed with the Minnesota Department of Education in May.

“That’s really forcing our hand to keep both units to provide reliable services to the community … We find ourselves unable to keep both these units going with full capacity in the foreseeable future.” — Dr. Sumit Bhagra, medical director of Mayo Clinic Health System in Albert Lea and Austin, in a June 13 story regarding Mayo Clinic Health System in Albert Lea considering an expedited timeline for labor and delivery consolidation to Austin. Bhagra referenced a staffing shortage, a recent OB-GYN retirement, an upcoming retirement, a long-open obstetrics position and an unexpected departure as putting pressure on the situation.

“In this case, the evidence supports the conclusion that Officer Cantu and Lt. Palmer reasonably believed that deadly force was necessary to protect themselves and/or others from death or great bodily harm.” — An Olmsted County Attorney’s Office press release in June stating no charges would be filed in the Jan. 3 officer-involved shooting in Albert Lea that resulted in the death of an Albert Lea man.

“It’s a sad day for Albert Lea.” — Albert Lean Dave Karge June 26 about the closure of Mayo Clinic Health System in Albert Lea’s inpatient medical and surgical care unit. About 40 people met at the park, and several members of the Save Our Healthcare group walked up to the hospital carrying signs to mark the loss of the service in Albert Lea before returning to the park.

“By transitioning medical and surgical hospitalizations onto one campus, we’ll be able to care for sicker patients more often locally, which will help reduce the need for transfers to Rochester or elsewhere for care. We’ll also be able to invest more in the latest technology and equipment because we won’t be staffing and equipping two identical units in neighboring communities.” — Mark Ciota, CEO of Mayo Clinic Health System in Albert Lea and Austin, in June after the closure of Albert Lea’s medical and surgical care unit.

“A lot of people have helped Jason over the years and were amazed by what Jason has done over the years, but I think he has taught us, really, but all he’s done over the years. Instead of just saying, ‘Woe is me,’ and saying everyone else should take care of me because I have these issues I have to deal with daily, I’m going to go out and make a go of it.” — Brad Heggen in August after the unexpected death of Wells resident Jason Niebuhr. Heggen gave Niebuhr’s eulogy at his funeral.

“Many of us have memories there, and we would like to keep those memories strong while simultaneously updating the atmosphere.” — Attorney Eythan Frandle after a group of attorneys through Albert Lea Improvement LLC at the end of August purchased the former Elks Lodge building with plans to renovate it for the Peterson, Kolker, Haedt & Benda law firm and a real estate development and financing firm.

“This is a great day for the citizens of Albert Lea and the surrounding communities. This outcome is even better than we expected in that we not only are on a path to restore services that have been removed from Albert Lea, but we also will have more specialists available, and our cost of care will be substantially lower than most communities in south-central and southeastern Minnesota.” — Brad Arends, chairman of Save Our Healthcare and president of the Albert Lea Healthcare Coalition, on Sept. 12, as he announced MercyOne North Iowa will open a clinic in Albert Lea in 2020.

“It’s an emotional day for everyone involved — for our nurses, for our staff, for the community, for our administration, for everyone involved.” — Rick Thiesse, senior communications media specialist with Mayo Clinic Health System, about the closure of The Baby Place at the end of October.

“This is history. They’re going to talk about this forever.” — Brian Bias’ father after waking his son up to watch the moon landing in 1969. Bias was interviewed for a story on the Apollo 11 landing in this year’s edition of Progress.

“Being the first female here in Alden, I thought there’d be more challenges. … We all do a job. That’s what we’re here for. The brotherhood that we have … we’re all a family. It’s like a family you take in, and they take you in.” — Katie Hallman, talking about being the first woman to join the Alden Fire Department in an interview for this year’s Progress edition.