A chance at a better life 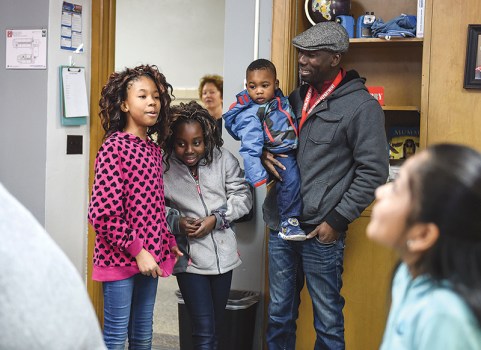 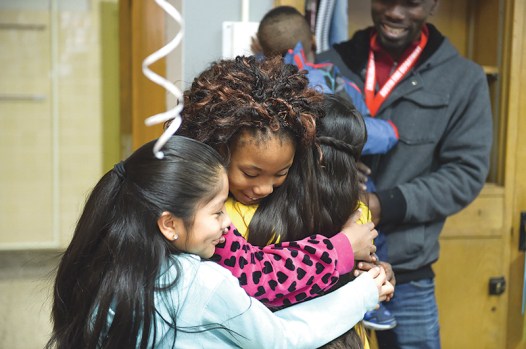 Keren Ehon gets a hug from classmates after she was surprised with her sister Gnima with a party to celebrate her dad’s citizenship Wednesday at Neveln Elementary. - Eric Johnson/Albert Lea Tribune 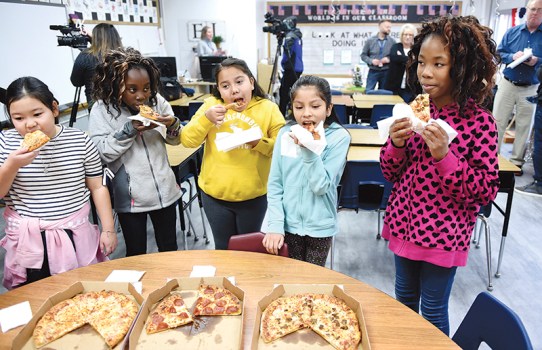 Keren Ehon, right, and her sister Gnima, second from left, have some pizza with her class at Neveln Elementary Wednesday morning. - Eric Johnson/Albert Lea Tribune 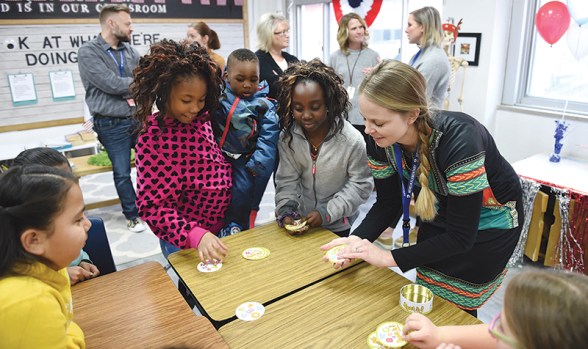 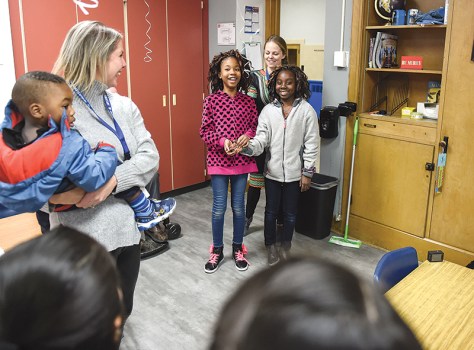 Keren and Gnima stand together after being surprised by their class and Neveln Elementary staff with a party celebrating their father’s citizenship. - Eric Johnson/Albert Lea Tribune

Daughters of new citizen get surprise celebration at school

Waiting for them was their class, teachers, staff, their father Kouassi Ehon and 1 1/2-year-old brother Elisha to surprise them. It was a congratulations for the father’s newfound citizenship the day before and the fourth graders’ impending citizenship.

However, the surprise was somewhat lessened when Elisha decided to speak up.

“That’s my brother,” Keren said as they entered the room recognizing the voice.

Still, it didn’t take away from the day’s celebration.

Citizenship has been in the process of becoming reality since 2012, when Kouassi Ehon first immigrated from Ivory Coast.

A few years later, Gnima joined him, but Keren still remained in Africa with their mother.

But with a little help from Santa, the sisters were reunited in 2018.

“We were writing letters to Santa and Gnima, who had already been here, had written that she wanted her sister here for Christmas,” said English language teacher Nicole Thompson. “That spring (Keren) came, and that was really neat.”

Wednesday’s party consisted of fun and games and pizza with Kouassi and Elisha joining in. While the girls feigned embarrassment, they quickly embraced the party atmosphere with the friends in their class.

The idea that citizenship might be on the horizon wasn’t known to school officials until this past Friday, when Kouassi Ehon stopped at the school to sign an approved absence for one of the girls, leaving a note that said he was about to gain official citizenship.

Now that he is a citizen of the United States, he can start working toward gaining full citizenship for his girls.

It’s a dream that means a great deal to his family, including current wife, Charlotte.

“It is meaningful,” he said. “This new opportunity. Now I am not an immigrant. I am an American citizen. I can walk anywhere.”

The idea means a great deal for his daughters as well.

“I haven’t really thought about it, but we do the Pledge (of Allegiance) every morning at home,” Gnima said.

Keren jumped in as well. “We have to get a Christmas tree now,” she said.

For Garbisch, she couldn’t imagine anything better for the girls, who she said take on a life vibrance every day in the classroom.

“I get bossed around on a daily basis,” Garbisch joked. “They are spunky and creative and fiercely competitive and smart.”

“It’s awesome,” she said, exemplifying the capabilities of children in her class. “I feel like it’s hard to explain and I wish all of these people knew about these kids and what they can do.”

As the party wound down, Kouassi Ehon gathered up Elisha and made his way to leave, but before he left, he talked about what citizenship means as a way to open doors for his girls and the rest of his family.

“I think it’s a better life for my daughters,” he said. “It shows they need to work hard, but it is not easy. For what you want you have to work hard.”

But there is more, and perhaps it was Gnima who summed things up so perfectly.

“I’m looking forward to really staying here,” she said. “This is our family, too.”