Clarice Elaine was born Jan. 5, 1925, the daughter of George and Emma (Alland) Grunwald in Albert Lea. She graduated from Albert Lea High School with the class of 1942 and continued her education at the University of Minnesota, where she received a degree as a licensed dental hygienist. 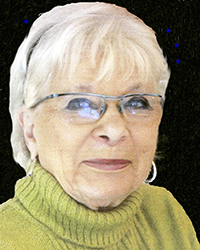 Clarice married Douglas Blesi on June 27, 1947, and they shared 53 beautiful years before his death in 2001, during which, Clarice enjoyed working part-time in Douglas’ dental office in Camden.

Clarice later married Donald “Forry” Porter, and they spent most of their years in Albert Lea.

She enjoyed gardening, crafting, antiquing, calligraphy, interior design and elegantly entertaining her friends and family. From appetizers to desserts, Clarice had great skill in the kitchen. She found refuge from the heat of the summer days at Lake Caribou and Lake Superior in northern Minnesota.

She was preceded in death by her parents Emma and George; husband, Douglas Blesi; and brother, Gordon Grunwald.

Clarice will be fondly remembered for her sharp wit, graceful presence and engaging personality.

In honor of Clarice’s wishes, her family will celebrate her life with a private service. Memorial gifts may be sent to Grace Lutheran Church in Albert Lea or SmileTrain (smiletrain.org).