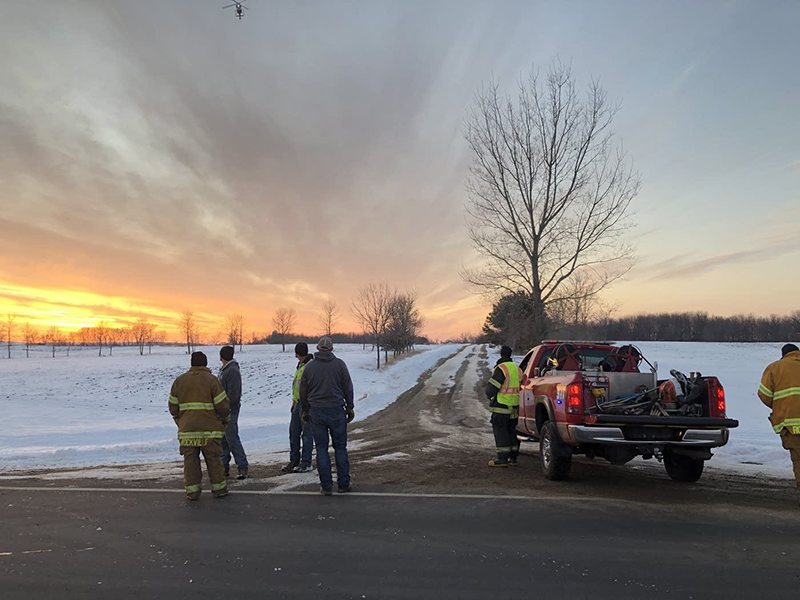 Emergency crews block off a driveway as part of the search for a Minnesota National Guard UH-60 Black Hawk helicopter that took off from St. Cloud around 2 p.m. Thursday. - Paul Middelstaedt/For MPR News

ST. CLOUD — Three soldiers from the Minnesota National Guard were killed Thursday when the Black Hawk helicopter they were riding in for a routine maintenance test flight crashed in a farm field in central Minnesota, Gov. Tim Walz confirmed.

The identities of the soldiers were not immediately released, pending notification of family.

The crash was being investigated and preliminary information on the cause was not released.

“My heart breaks for the families, the friends and fellow soldiers,” Walz said at a news conference. “The coming days will be dark and difficult.” He said Minnesota stands ready to assist the families of the soldiers who were killed.

The National Guard said the helicopter was a UH-60 Black Hawk from the guard’s Army Aviation Safety Facility in St. Cloud.

The Guard lost contact with the helicopter shortly after it took off on a maintenance test flight from St. Cloud on Thursday afternoon, Guard Master Sgt. Blair Heusdens said. The helicopter called mayday about nine minutes after takeoff.

The Minnesota State Patrol was called to bring in a helicopter to help with the search. A State Patrol Cirrus aircraft, equipped with thermal imaging cameras, also helped in the search.

Television aerial footage showed the wreck of the helicopter along a tree line near open fields near St. Cloud, a city about 59 miles (95 kilometers) northwest of Minneapolis. Apparent scorch marks encircled the flattened wreckage in the snow.

Dave Tannehill, a flight instructor in St. Cloud, was among those who took to the air to help search for the missing helicopter. He told the Star Tribune that he brought a couple people with him to help look.

“We were hoping to find a helicopter sitting in the middle of a field with a couple guys standing next to it looking for a ride. But not lucky enough to find that,” he said. Tannehill said he was in the air for about 90 minutes and circled the area, along with a military plane and police aircraft.

“It was bad news for everyone, and it was a quiet flight back,” Tannehill said.

The Guard’s base near St. Cloud Regional Airport has been in operation since 2009, with Black Hawk and Chinook helicopters maintained there.

Walz served for 24 years in the Army National Guard, while he was a schoolteacher and coach, but retired in 2005 to run for Congress. He canceled a tree-lighting ceremony Thursday and went to the area near the crash site.

He tweeted Thursday night that he was in Kimball with the brave National Guard service members. His office said he would be in continuous contact with the National Guard throughout the day Friday.