The Lens and Shutter Photography Club met at 7 p.m. Nov. 21 in room 465 in the lower level of Mayo Clinic Health System in Albert Lea. Club President Darcy Sime presided over the meeting. Ten members were in attendance.

Sime gave a presentation on snow photography, followed by a question and answer time.

The club displays prints from the previous month’s competition at Farmers State Bank in Albert Lea, and will display prints at Albert Lea City Hall the month of December.

The next meeting was set for Dec. 19 at a member’s home for the club’s Christmas party.

The club meets the third Thursday of the month from September through May. Anyone interested in photography is welcome to attend. 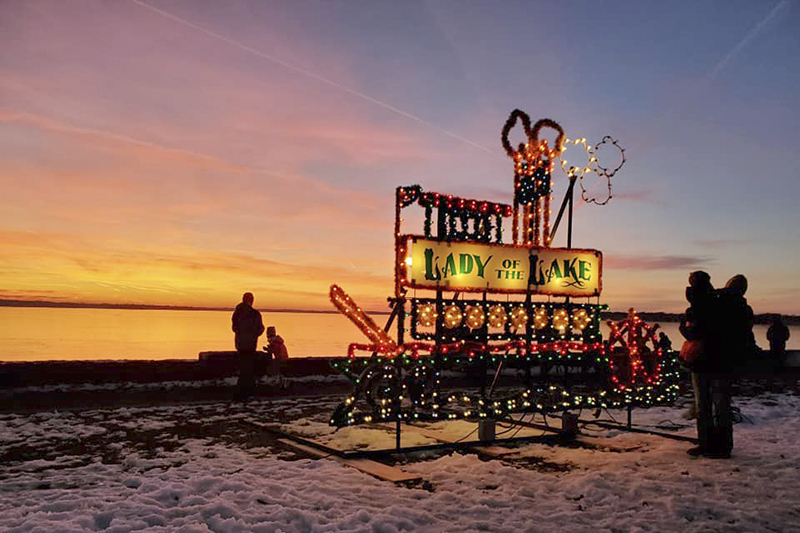 FROG of Central Freeborn Lutheran Church recently went on a bus trip to Christmas by the Lake in Clear Lake. – Provided

On Dec. 7, 46 people boarded a coach bus in front of Wok-N-Roll in Albert Lea with Marty Modderman at the helm.

The bus, sponsored by Fully Rely on God of Central Freeborn Lutheran Church, headed south of the border on Interstate 35 to Clear Lake.

Prizes were from the Clear Lake Chamber of Commerce and the Minnesota Twins. A Christmas stocking from the Albert Lea Convention and Visitors Bureau shaped like a litter bag was given to each person on the bus. In the bags were coupons from KFC, Arby’s, Dairy Queen, Applebee’s, Main Street Family Restaurant and Ramada and Quality In,, all of Albert Lea; plus a beanie baby and a Christmas card.

The group reached their destination of Christmas by the Lake, reportedly in its 25th year. They had about an hour to tour Main Street with all the activities prior to the lighted parade. The parade was followed by fireworks on the lake.

The group arrived back at Wok-N-Roll at about 7:15 p.m. Genie Hanson led in the Table Prayer before eating at the restaurant.

Prior to leaving, the group sang “We Wish You a Merry Christmas” chorus twice to the employees.

The next FROG activity is a Valentine’s party at 6 p.m. Feb. 1 at Central Freeborn  Lutheran Church in the Fellowship Hall. Pizza starts at 6 p.m., followed by 12 games of Norwegian bingo, ice cream with toppings and door prizes. Call 373-8655 or 826-3267 to attend.