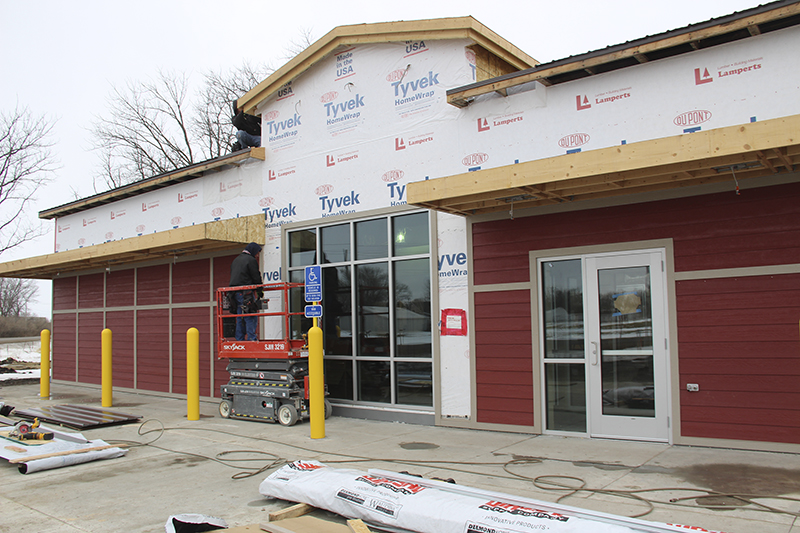 Crews work Thursday at the site of the new municipal liquor store in Wells that will be called Wells Liquor Depot. The store is slated to open in January. - Sarah Stultz/Albert Lea Tribune

WELLS — Work is wrapping up on the new Wells municipal liquor store that will soon be known as Wells Liquor Depot.

Wells City Administrator CJ Holl said construction is scheduled to be completed Jan. 10, with hopes to open it shortly after once paperwork is completed with the state.

“We’re really excited about showing people what we have for them,” said liquor store coordinator Scott Berg.

Because some stores have not been as profitable as cities would like them to be, many cities are looking at new approaches, and even new locations, for their stores.

Holl said the liquor store in Wells has “treaded water” over the last eight to 10 years, and as a means to improve profitability, the city decided to move it to a new location. The present location on Broadway in downtown Wells receives low traffic compared to the state highways that travel through town, which are much busier.

The new store will be at the junction of Minnesota highways 109 and 22, across the street from the Casey’s gas station and Dairy Queen, in a building already owned by the Wells Economic Development Authority that had been rented out. 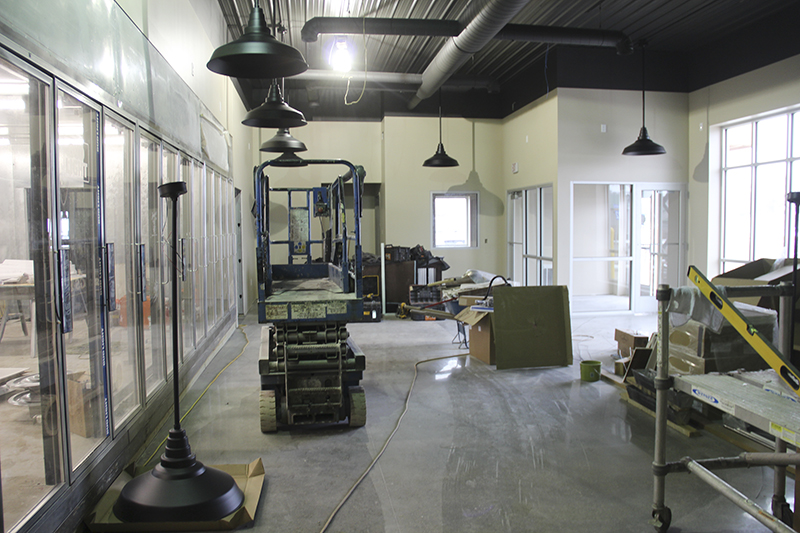 Wells Liquor Depot will have a railroad theme to go along with the city’s railroad heritage. – Sarah Stultz/Albert Lea Tribune

Holl said he and Berg went out and looked at municipal liquor stores in other towns with populations between 2,000 and 3,000, finding out what they did to make them successful or what they would like to do to improve.

The Wells City Council approved renovations during one of its meetings in August, Berg said, and construction began in September. The renovations were originally estimated to cost $565,000, but bids came in lower around $515,000.

Holl said things had been moving on schedule until the area received snow in October and November, which set things back a little. They had originally hoped to be open in December.

Berg said once the building is complete, it will be essentially double the size of the current space, with cooler space expanding from a six-door cooler to a 12-door cooler.

“We’ll have the ability to carry stuff people are going out of town for,” he said.

The city was able to save some money on costs for the new store by traveling to Sleepy Eye to get the cooler out of its liquor store, which is closing.

Holl said the city went through a list of a couple dozen names and narrowed them down to two, and community members picked their favorite. Seventy percent of votes were for Wells Liquor Depot.

The new store will have a railroad theme, which will be fitting to the city’s railroad heritage.

Berg said when they first started looking at renovations, they got a lot of inspiration from the Wells Depot Museum. Holl noted that Wells was the first railroad stop in Faribault County, and the founder of the city was tied to the railroad.

“I think our new store will do really well,” Holl said. “We’re excited to get it off the ground.”

Berg said he hopes to make the store profitable again, so it can start supporting other projects in the community.

He encouraged people to shop local.

“When they buy local, it stays local,” Berg said.