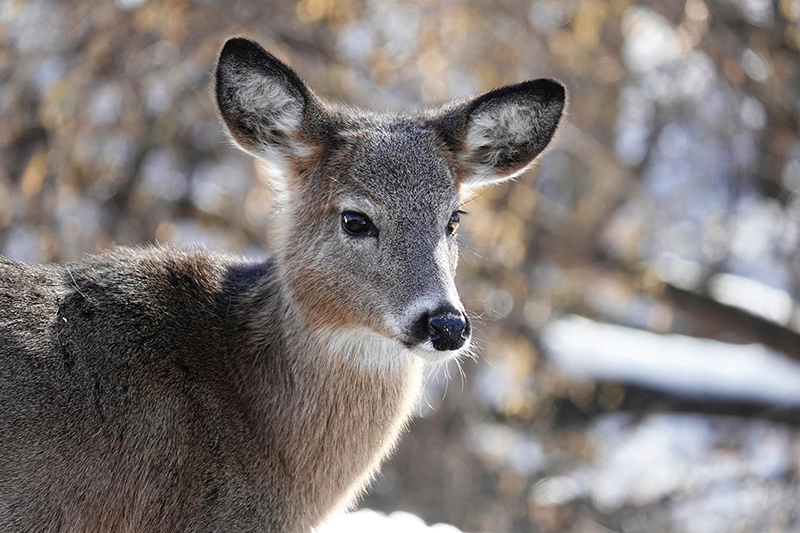 “Everything is nearly copacetic. I can’t tell if it’s late last night or early tomorrow morning. In my dream, I wanted to become a glassblower, but I blew my chance and became a snowplow driver in the freezer of a supermarket instead. Despite the troubled sleep, I was ready for the recent storm of the century when it hit. I’d fashioned a crude ice scraper out of a spear.”

It was as if I were walking in a snow globe. The snow fell all friendly and benign. The days before were windy and had given the yard its first snow bank of the year — in front of the garage. I mumbled “amain.” In “Moby Dick,” Herman Melville wrote, “The wind now rising amain, he in vain strove.” Emerson wrote, “The soul strives amain to live and work.” Merriam-Webster dictionary defines the word as: with all one’s strength, at full speed or with great haste. With that as inspiration, I recalled another word from the cobwebs of my mind and walked widdershins, meaning in a counterclockwise direction.

A bald eagle flew over the yard just as the sun was in the right position to create a shadow flapping across the snow. Talk about casting a giant shadow.

The sun became scarce and a true winter storm hit. It brought more snow. Snow banks became abundant. “The Old Farmer’s Almanac” said this about that: “Now is the time of the deep snows and thrice blessed is the neighbor who will plow you out.”

A skunk had awakened long enough to make a few trips in and out of a culvert, its trail showing it had plowed snow in the process. A group of skunks is a surfeit. I prefer scurry as a collective noun for squirrels, although I call them a surfeit when there are too many.

I watched a snowplow go by. It’s always a welcome addition to winter. 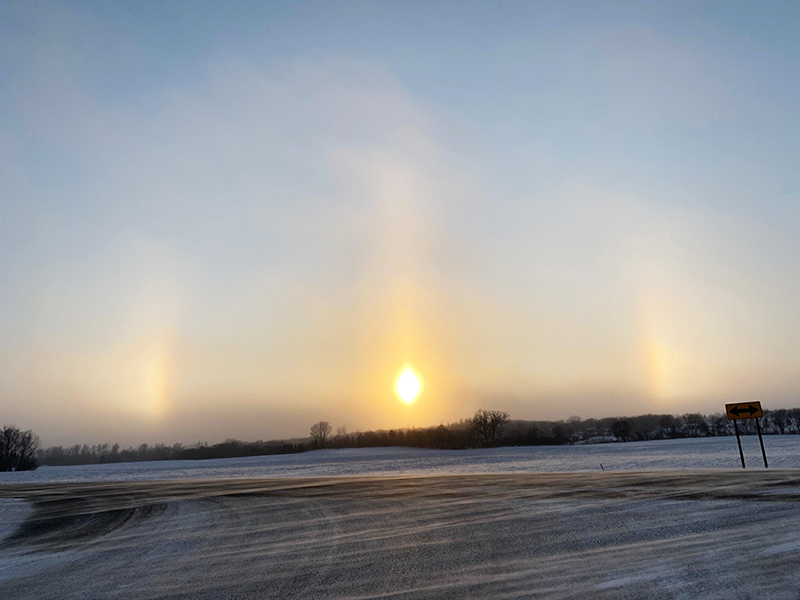 Whether we call them sundogs, mock suns or parhelia, they come out to play in cold weather. – Al Batt/Albert Lea Tribune

“When do great horned owls nest?” In Minnesota, courtship and territory formation begin in December and early January with eggs laid at the end of January through February. The owls have thick feathers — even their legs and feet are feathered — to handle the cold. The young hatch with a layer of fluffy down to keep them warm. The owls are able to incubate eggs successfully at 27 below zero and eggs have been recorded to withstand a mother’s absence for 20 minutes at 13 below zero. The incubation period is 30 to 37 days and the nestling period lasts about 42 days. Early nesting might give the young time to learn hunting skills before the next winter.

“Why is a species of tree named the hackberry?” It’s an unfortunate name for a tree. It makes it sound as if the tree is about to cough up a ball of berries or has done some criminal things to your computer. Colonists called this canopy tree a hagberry, probably because they found it similar to the wild cherry species by that name in Scotland. Eventually the name morphed into hackberry. Its bark resembles warts on young trees and changes into deeply furrowed, corky ridges on mature trees. Witches’ broom, a dense cluster of branches resembling a broom or bird’s nest growing from a single point, is a disfiguring disease common on hackberry trees. These deformities are typically caused by mites or powdery mildew. Hackberry produces small, pea-sized berries that change from light orange to dark purple when ripe in the fall. Birds feed on the fruits straight from the tree and on the ground. Some humans eat them too.

“Have wild turkeys always been here?” Do you mean in your house? If so, I’d say “no.” If you refer to Minnesota, my answer is a definite “maybe.” Prior to European settlement, wild turkeys were found only in southeastern Minnesota along the Iowa border. Those turkeys were eliminated by hunting and habitat loss.

“Are all spiders poisonous?” I’m not certain that any of them are poisonous, but most spiders are venomous. Poisonous generally refers to something you eat, drink, or take into the body in other ways. Mushrooms might be poisonous, but spiders or snakes aren’t. The venom found in the majority of spiders isn’t strong enough to injure a human, but I wouldn’t recommend eating any of them.

“Is the cedar tree really a cedar?” The eastern red cedar is a juniper and is sometimes called a pencil-cedar, because prior to 1940 pencils were made almost entirely from cedar. Pencils are now made from other woods or synthetic materials. The tree’s berries are an important food source for birds and mammals.

Thanks for stopping by.

“Nature poets can’t walk across the backyard without tripping over an epiphany.” — Christian Wiman

“There’s a whole world out there, right outside your window. You’d be a fool to miss it.” — Charlotte Eriksson