Being part of a ‘joyous event’ 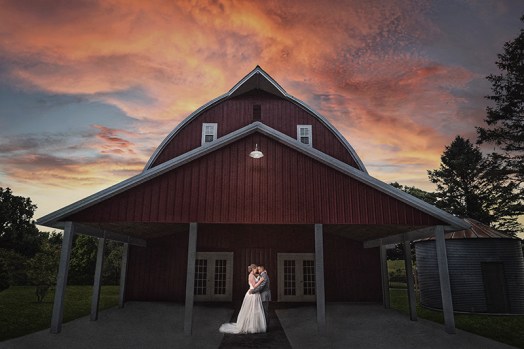 The Barn of Chapeau Shores offers many picturesque views for the bride and groom, including this outdoor patio that was added during renovations. - Photo courtesy Lora & Isaac 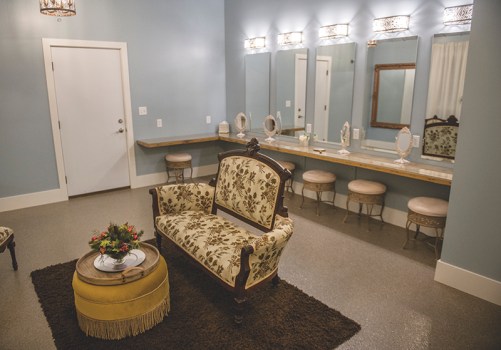 Pictured is the bridal suite at The Barn of Chapeau Shores. - Colleen Harrison/Albert Lea Tribune 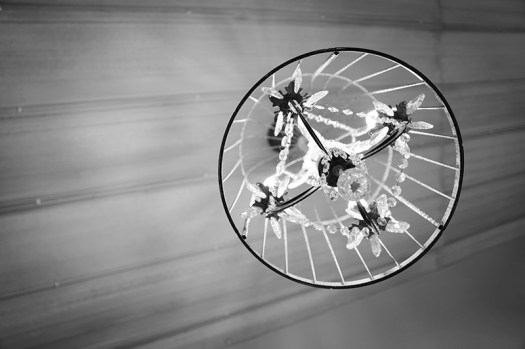 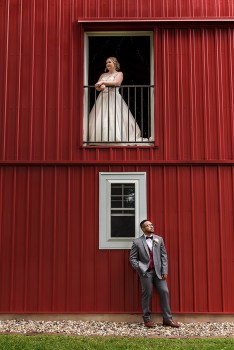 This doorway that looks out from one side of the barn is a popular place for photos. - Photo courtesy Lora & Isaac 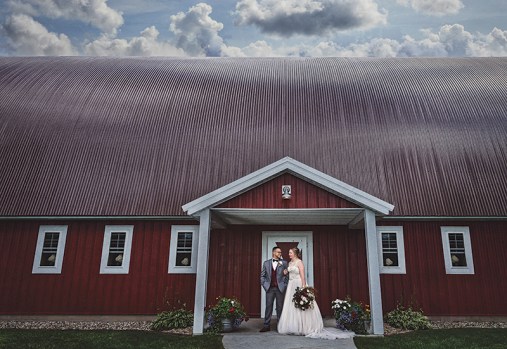 The Barn of Chapeau Shores offers a rustic feel of being out in the country while still in the city. - Photo courtesy Lora & Isaac 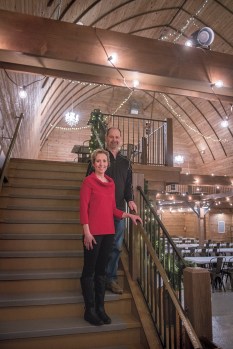 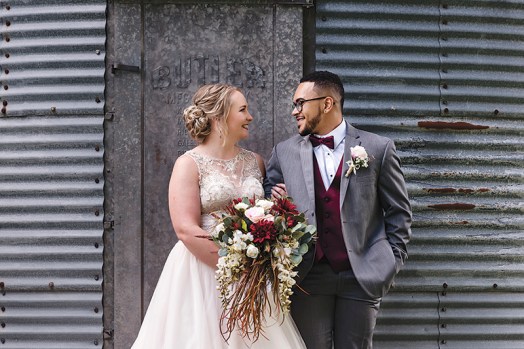 Kevin and Jess Sarmiento stand in front of the silo added at The Barn of Chapeau Shores. - Photo courtesy Lora & Isaac 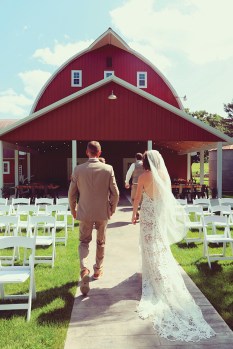 Matt and Jess Hatland walk down the aisle on the grounds of The Barn of Chapeau Shores. - Photo courtesy Emelia’s Photography 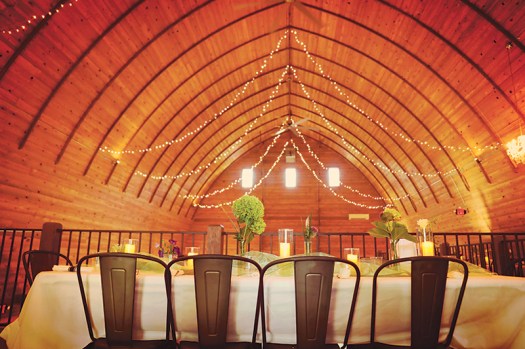 The Iversons have lights hanging along the top of the roof of the barn throughout the year that add a magical touch to the space. - Photo courtesy Emelia’s Photography 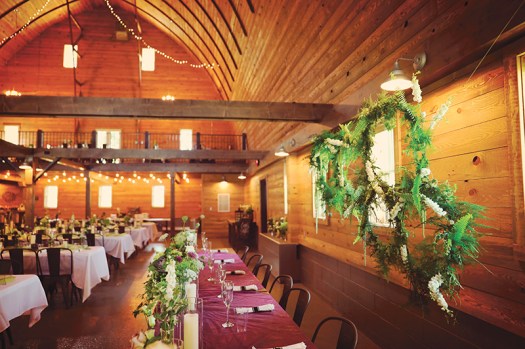 Couples can add whatever decorations they would like at the barn during their wedding and reception. - Photo courtesy Emelia’s Photography 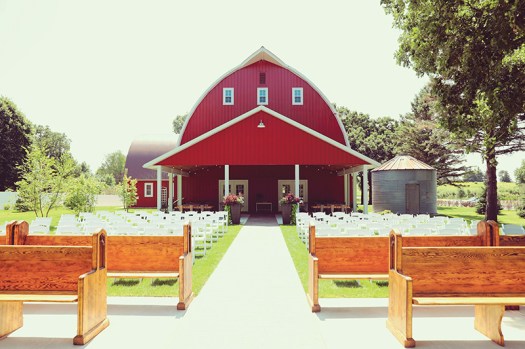 The Iversons have pews they restained from an old church for family members to sit on during weddings outside the barn. - Photo courtesy Emelia’s Photography

The Barn of Chapeau Shores offers mix of rustic elegance

Albert Lean Jayne Iverson has always enjoyed hosting and planning parties. For a long time, she thought it was just a dream to do that on a higher level.

But then one day, her daughter was in a wedding, and the whole way home they couldn’t stop talking about it.

She and her husband, Chad, decided to go for that dream.

When they got home, they started looking at different locations as far away as Austin and Rochester and considered whether to renovate a space or build new.

They said they knew the former Sons of Norway barn in Albert Lea was for sale and liked the idea of preserving an old building. Plus, with the transition of some of the services at Mayo Clinic Health System in Albert Lea to Austin and the closure of two of the city’s largest stores, they thought they could make a positive impact by opening up a wedding barn in Albert Lea.

It could also help local vendors, including cake decorators, caterers, florists, tuxedo and bridal stores — plus any guests that come in for a wedding would need to stay at area hotels and eat out at area restaurants.

“This is our hometown, so it’s near and dear to us,” she said. “We both moved away from a short time, but we decided before we got married we wanted to come back to Albert Lea.”

For 20 months, the Iversons embarked on a journey to renovate the barn into what is now known as The Barn of Chapeau Shores.

It had been a working barn up the hill from its present site when it was first built and was moved in 1966 for Lea College, where it was used for the student center. After Lea College closed, the Sons of Norway purchased it and opened it in 1978, Jayne Iverson said. It was used by the organization for many years until it was purchased in 2014 to be used for extra wrestling space.

Jayne Iverson said she and her husband bought the barn in 2017. They said it was structurally sound, and they liked the idea of renovating it.

With Chad Iverson being a contractor and carpenter for a living, they said they wanted to do the project the right way, and hired structural and mechanical engineers as well as an architect.

Before they started their project, the barn did not have any windows and had drop-down ceilings and cement floors. It hadn’t been updated for many years.

They essentially gutted the building, reinsulated everywhere and then put up new shiplap and tin.

It now features an open room and a loft, with lights hanging from the beams, along with a bar area for caterers, restrooms, separate groom and bride suites, and a covered patio. Seating is both on the main level and in the loft.

Between the inside of the barn and the covered patio, it can house 280 people, and the facility is handicapped accessible.

Chad Iverson said out of the 200 event barns in the state, theirs is one of only six that are up to code.

In addition to the venue itself, they supply tables and chairs both indoors for the reception and outdoors for couples that choose to get married outside of the barn, Jayne Iverson said. The families of both the bride and groom sit in church pews that the couple restored.

She said the couples who have utilized the space thus far liked that they could have everything for their special day at the barn.

“It’s nice that their guests can come to one place for the wedding, the dance and the reception all in one place,” she said.

‘A joyous event for families’

The barn opened in June and so far has hosted eight weddings and has 10 weddings scheduled for 2020. It also had four Christmas parties slated.

Jayne Iverson said there have been people from nearby in Austin, Blooming Prairie and Owatonna but also other couples who live out of the area in Colorado and Nebraska who chose the barn because it was in the middle of where both of their families live.

In addition to the venue itself, the Iversons also rent wedding decorations and other specialty items for events.

The couple helps out wherever the bride and groom need them during their big day, whether it be doing tasks such as taking out the garbage, refilling the cupcake table, sewing on a button or setting up a photo booth.

The Iversons grew up in Albert Lea and were high school sweethearts. They both moved away for a few years before they moved back in 1993. They have two children, Emma and Noah.

Jayne Iverson has worked for Mayo Clinic Health System for 29 years and presently works in the Albert Lea Cancer Center as a registered nurse. Chad Iverson is co-owner of L&I Construction.

They joke that she had the vision for the project and he had the skills to get it done.

Jayne Iverson said her parents were owners of the Donut Kettle on South Broadway, and she saw from an early age how much work — and also how rewarding — it was to own a business. She said she still has people who come up to her and tell her about their memories there.

“Being a part of something like this, such a joyous event, it just warms my heart that we’re privileged to be part of their special day,” she said.