Building gets a facelift 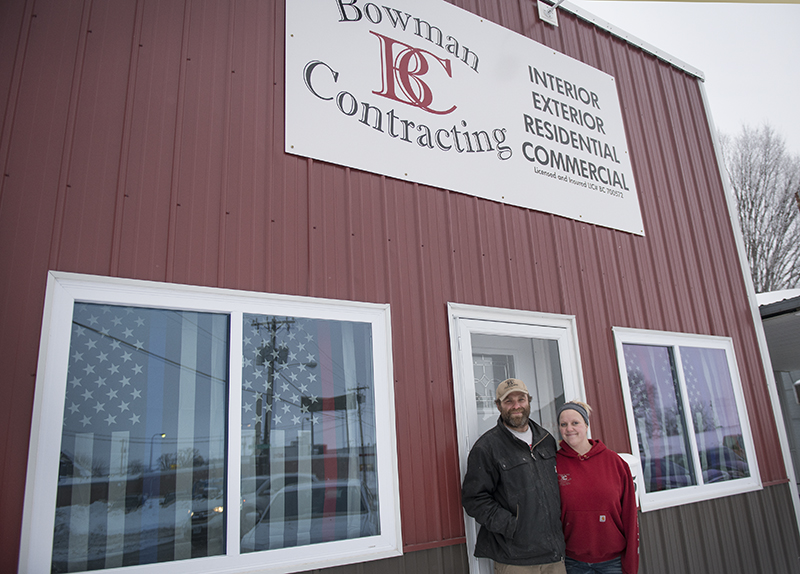 Albert Leans Zack and Amanda Bowman said their new building on Marshall Street is already giving them increased visibility for their business and support from the community.

The Bowmans purchased the building on Marshall Street, which was formerly storage for an estate sales company, in November and have been working on fixing it up little by little in the evenings and on weekends.

Zack Bowman said he has worked in the construction industry for the last 10 years but has been licensed in more recent years as Bowman Contracting. The company works on both interior and exterior residential and commercial projects, though he said the bulk of what the company does is residential, including both large and small projects, such as roofing, siding, tile work, window installation and other renovations.

Amanda Bowman works right alongside her husband on various projects, and they also have subcontractors they hire when necessary.

The couple said their new building essentially fell into their laps after the previous owner called Zack Bowman one day for a roof repair, and they then found out she wanted to fix the building to sell it.

They had been looking for a building — they had been utilizing space out of the garages of friends and family and their company trailer — and it seemed like a perfect fit with the couple living close by on Green Avenue.

Zack Bowman said they blew the whole roof off the building after they purchased it, and then put on a new truss roof and re-shingled it.

They have also renovated the remainder of the exterior.

On the inside, they have gutted the building, put in insulation and plan to have it done in the spring to be a woodworking shop for cabinets in the back and an office in the front.

“We face-lifted the outside (first) because that’s what people see,” Amanda Bowman said.

She said most of the work has been done when they’re not working on other projects, so it is going a little slower than most of their projects would.

She said the community has been supportive throughout the process and gets excited when they see she and her husband fixing up the building.

Amanda Bowman said they’ve even had people drive by and roll down their windows and say how good the building looks.

The couple has two children, ages 5 and 7, who she said have also been a part of the process.