Funeral services for Gary “Gar” Petersen, 75, of Albert Lea will be at his beloved St. Theodore Church at 2 p.m. Saturday. Visitation will be starting at 12:30 p.m. at the church that day. 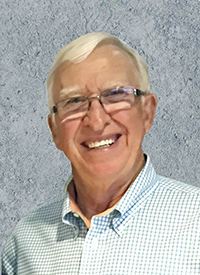 Gar passed away peacefully Monday, Dec. 30, 2019, at St. John’s Lutheran Community. His positive spirit remained strong until his final days. Gar and his family greatly appreciate the countless visits from friends and family and for the compassionate care he received from the entire St. John’s staff and Dr. Steve Wiese.

Gar was born June 10, 1944, in Albert Lea to proud parents Leslie and Anna Petersen. As part of a growing family, sports were the focus of the kids’ time and attention. Many of these friendships made during these early years last to this very day. The family moved to Kasson during Gar’s junior high years and his love of baseball and basketball continued to grow. Gar was eventually inducted into the Kasson High School Sports Hall of Fame. None of his sons inherited his nearly 40-inch vertical leap.

After graduating from Winona State, he married Cheryl Cisewski in 1966. They moved to Stewartville, where Gar taught physical education and coached the varsity basketball team. Soon after, he was recruited into the insurance business and never looked back.

The family moved to Albert Lea in 1977, which has been their home ever since. He was welcomed into Security Insurance by his dear Uncle Clifford and his cousin Larry. Gar and Larry had a productive and incredibly amiable partnership for over 30 years. Gar valued the many friendships forged during his years in business, coaching youth basketball, from many memorable fishing trips and on the golf course (long live The Shortstop!). After retiring, he still loved to run into clients or employees and catch up on the latest happenings with them.

Gar is survived by his bride of 53 years, Cheri; his three sons and families: Mike and Amy Petersen of Albert Lea, Scott and Tara Petersen of Sioux Falls, South Dakota, and Jon and Kennie Petersen of Austin, Texas; and six grandchildren, Quinn and Calvin of Albert Lea, Noah, LilyAna and Nash of Sioux Falls and Finn of Austin, Texas. He is also survived by sister, Mary Schwenke (Kim), of Prior Lake; brother, Bob (Carol), of Mantorville; sister-in-law, Linda Petersen, of Highlands Ranch, Colorado; sister-in-law, Joy Barclay, of Bemidji; and several nieces, nephews, other relatives and close friends whom he loved very much.

He was preceded in death by his parents Leslie and Anna; mother-in-law, Lilian; and brothers Marlin (Pete) and Daniel (Mike).