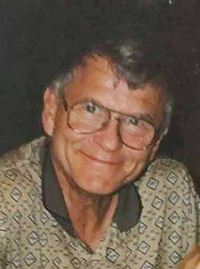 His family will miss his bright eyes and his broad grin and his easy-going sweet nature.

Gerald was the eldest son of Florence (Irene) Haughton and Arnold Wilhelm Skaar. He was born Oct. 13, 1934, in Albert Lea, and he grew up on the family’s farm near Hayward. After first attending a two-room school in Hayward, he graduated from Albert Lea High School in 1952, where he was president of the Future Farmers of America.

He met his wife, Grace Elizabeth Lysne, 70 years ago at a combined confirmation class where she said, “He raised his hand a lot!” Jerry obviously set his sights on her, as family lore knows the story of a basket social where he found out how much money other potential suitors were prepared to offer and then placed a higher bid to secure Grace’s basket and, more importantly, her company.

After graduation he entered the United States Navy and went to San Diego for basic training, followed by electronics school in San Francisco. He served on the USS Rochester from 1952 to 1955 as a petty officer, 3rd Class electronics technician. He often spoke of his travels on the ship with wonderment, notably time in Hawaii, Singapore, Hong Kong and Japan; open water ocean swims; and the size of typhoon waves at sea.

He married Grace on Dec. 29, 1956, at Oakland Lutheran Church and they moved to Minneapolis, where he attended the University of Minnesota to study electrical engineering and also worked in the pressroom of one of the large Minneapolis newspapers. In the early 1960s they moved to another Skaar family farm in Hayward and he worked as an electrician and plumber. Later he started and operated Skaar Electric for many years, greatly appreciating the years when his son, Brian, worked with him.

Jerry always had an inquisitive mind and was an avid reader and supporter of the arts. He enjoyed professional and community theater performances, area Toastmasters, the Grapevine Twist Square Dance Club and Civic Music; he served on the Albert Lea District 241 school board for over a decade; and he volunteered with the local Audubon Society, including time as its president.

Jerry enjoyed all types of good food, especially when Grace made it, and appreciated it right up until his final few days. His ongoing devotion to Grace was epic. Taking great pride in his children and in his grandchildren, he loved to attend their dance recitals, musical concerts, swim meets, soccer games, graduation celebrations, etc.

People often mention his breadth of knowledge on a wide range of topics, and that he was a great, entertaining conversationalist. He immediately endeared all caregivers with his kind, uncomplaining and appreciative manner. The family is forever grateful for the exceptional care he received throughout his senior years at the Minneapolis Veterans Administration Hospital and also at St. Gertrude’s physical rehabilitation unit and later in their skilled nursing and hospice units.

Proceeded in death by his parents, he was profoundly affected by the accidental death of his baby brother, Bruce, and especially mourned the loss of a beloved Uncle “Hub” Carlyle Skaar and dear cousin Janet Skaar Pecora.

Gerald donated his body to Mayo Clinic’s anatomical bequest program in Rochester for the purposes of medical education, research and surgical training, and the development and testing of new surgical devices and techniques.

A memorial service will be planned for later this year. Memorials in honor of his dedication to the arts, education and civic involvement are preferred to The Albert Lea Art Center or Fair Fight (fairfight.com is an organization fighting for free and fair elections).