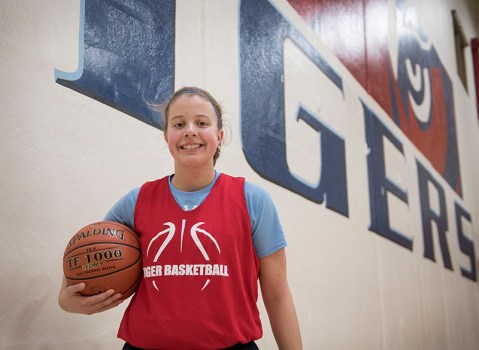 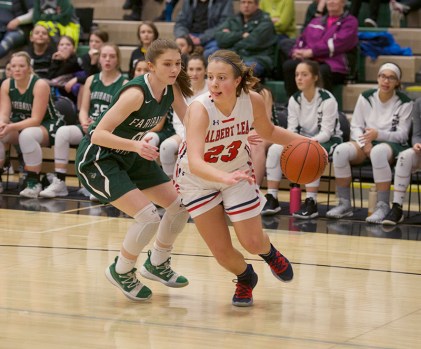 Albert Lea senior Sam Skarstad fights around a defender Friday night on the road. Skarstad scored her 1,000th career point in the second half of the game and ended with 20 total points in the win. - Tyler Julson/Albert Lea Tribune 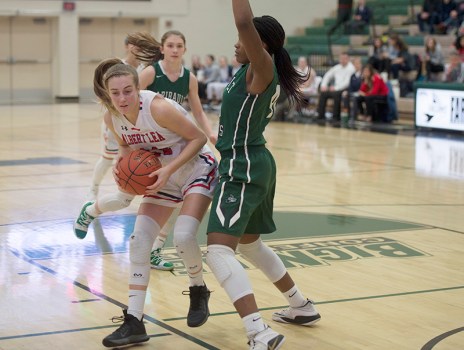 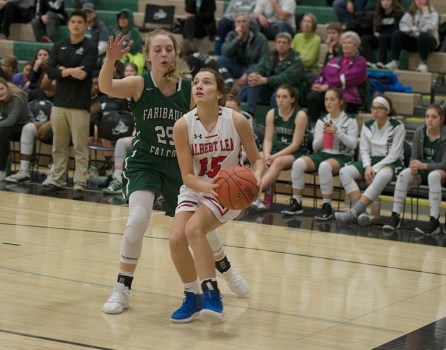 Freshman Kristina Espinosa attacks from the baseline Friday night in Faribault. The Tigers improve to 6-10 after the thrilling win. - Tyler Julson/Albert Lea Tribune

Not only did Skarstad fuel the Tigers to an exciting double-overtime win, she etched her name in the Albert Lea record books by scoring her 1,000th career point.

Only needing 13 points to reach the milestone before the game, Skarstad scored 12 points in the first half and surpassed the mark early in the second half with a breakaway layup.

Skarstad talked about what she was thinking after getting the steal and driving to the hoop.

“‘Just don’t miss the layup,’” Skarstad said. “I put the layup up and I kind of turned around to look at it. Then I heard the crowd and all I could do was smile. I made my goal.

“I just looked at it like just letting the game come eventually. I didn’t want it to be about me tonight. I was really just looking for the team win and I met my goal in the process.”

Jason Thompson, the girls’ head basketball coach, has been with the team for two years and talked about what it has been like to coach Skarstad.

“She puts all the work in and a lot is what people don’t see,” Thompson said. “It’s the countless number of shots in the gym when no one is around. She’s in before games shooting. For her to pull all that work in, and I got two years of watching it, it’s really special. We have a lot of great kids on this team and Sam’s a great example of showing the younger kids what they can do when they put the hard work in.”

Skarstad went on to score 20 total points in the game, including two free throws that sealed the game in double overtime.

A thriller of a game

Both offenses started slow in the first half, and Skarstad did most of the scoring through the opening six minutes of play. The Falcons were forced to call a timeout at the 12-minute mark with the score in favor of the Tigers, 11-9. Skarstad had eight of those points, six of which came from beyond the three-point line.

The next six minutes saw a total of three made field goals between both teams. With six minutes left in the half, the Tigers took off and went on a 14-3 run. However, just before the end of the first, the Falcons took flight and trimmed what was a 12-point lead to just five as the halftime buzzer sounded.

Skarstad led at the half with 12 points, but sophomore Taya Jeffrey was close behind with 11. Senior Ashley Butt had three and sophomore Jordan Juveland had two.

Starting in the second half, the Tigers saw their offense come to life. The Tigers extended their lead to nine after Skarstad scored her 1,000th point. The Falcons, however, again went on another small run, trimming the lead to just two points.

Faribault resulted to a physical style of defense in the second half, which caused some Albert Lea turnovers, but also sent them to the free throw line midway through the half.

After an Albert Lea timeout with just over 10 minutes remaining, Jeffrey went on an offensive tear, scoring seven straight for the Tigers, five of which came from the free throw line.

The Falcons still stayed right behind the Tigers and took a one-point lead with less than three minutes left in the game. However, Jeffrey took the lead right back with her ninth straight point.

A late free throw from the Falcons tied the game at 53-53 and sent the game to overtime.

The Tigers looked dead in their tracks after falling in a five-point deficit early in the first overtime period. However, a three from Jeffrey and freshman Kendall Kenis came in clutch with a basket and two huge free throws to tie the game once again at 60-60 with 1:16 remaining.

Neither team could find the basket until Jeffrey put the Tigers ahead 62-60 with a lay in with seven seconds left in the period. Despite a strong defensive presence, the Falcons drove the length of the floor and made the tying shot as time expired.

Albert Lea fell behind by one basket early in the second overtime, but it would not last long. Skarstad found a basket under the hoop to tie the game and Juveland added two free throws on the next possession to give Albert Lea a 66-65 lead.

The Tigers put any doubt to rest with six straight free throws — Kenis, Jeffrey and Skarstad all having two each — putting an end to the losing skid with a 72-65 victory.

“These are character-building wins,” Thompson said. “Credit to our team. We had huge resolve and that’s what I told them in the huddle. Kendall hit key free throws to put us into overtime, Jordan gave us the lead and then Taya and Sam finished it off at the end. It was a great team win. The bench was into it and it was a fun game to be in.”

The Tigers climb to 6-10 on the season and will play again Tuesday on the road in Winona.