‘It makes you believe in miracles’ 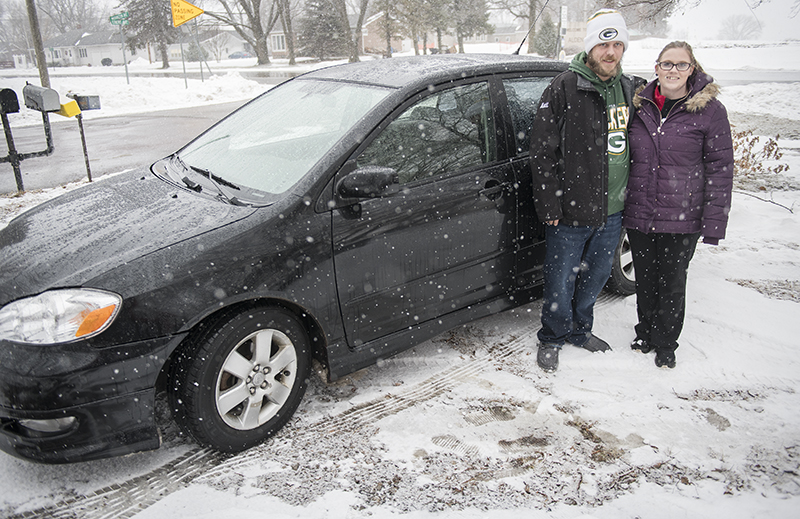 Matt and Ashley Stahl were given a used car through a giveaway at Dave Syverson after the couple's car was stolen Christmas Eve. - Colleen Harrison/Albert Lea Tribune

Couple given car after theirs was stolen Christmas Eve

ALDEN — An Alden couple said they are grateful and overwhelmed after being gifted a used car this week from Dave Syverson Auto Center.

Matt and Ashley Stahl had arrived home on Christmas Eve with their family from a vacation to Florida when their car was stolen later that night out of their driveway.

Matt Stahl said their family had gotten back to their house at 4 a.m. that day, slept until the afternoon and had a busy day of visiting various family members for Christmas and got home after 9 p.m. that night.

“We were exhausted,” Ashley Stahl said.

She had decided to go to bed, and her husband was in the garage when he said at about 10:45 p.m. he heard something and looked out and saw their black Mercury Sable pulling out of the driveway without any headlights on.

At first, he said, he thought it was his wife, but after running back into the house and finding out she was in bed, he realized the car had been stolen and called the Freeborn County Sheriff’s Office to report it.

The keys were inside the house.

“I don’t understand how anyone can be like that,” Ashley Stahl said, noting the family felt violated in the hours and days afterward.

In addition to the car itself, the car had seats in it for the couple’s two youngest children, as well as Christmas gifts that hadn’t been brought inside for their middle child and important paperwork that had been left in the car from their trip.

It was their only working car to get them to and from work — she works at Casey’s gas station in Wells, and he works at Zumbro River Brand in Albert Lea.

Matt Stahl said he made a post on Facebook telling people their car was stolen and asking people to look out for it.

The Stahls said they only had liability insurance on their car, so it did not cover a replacement, and there were no leads in the case.

They said they were trying to move forward with their lives when on Monday, Ashley Stahl said she got a Facebook message from Dave Syverson saying they had been selected as the recipients for the dealership’s car giveaway.

“He’s not an emotional person, but he was with this,” she said of her husband.

On Tuesday, they went into Dave Syverson to pick up their 2007 Toyota Corolla.

Travis Stortroen, operations director at Dave Syverson, said it was touching day — not only for the Stahls but for the employees, too.

“Both of them were crying, hugging, couldn’t believe it was happening,” Stortroen said. “Some staff were crying. It was a pretty emotional deal.”

The operations director said Dave Syverson hopes to be able to give back and help people in the community.

“Transportation is a huge need — to get to work, to get your kids to school and even to get groceries,” he said. “We feel we can make an impact by giving a vehicle.”

The dealership has done the giveaway the past few years and has used the AZ-1 community organization and the United Way in the past to find candidates.

This year, it launched a Facebook campaign asking people to nominate families in need.

“We took those nominations and got together and picked the one that we thought was the most touching story,” Stortroen said.

In addition to the car itself, the employees pitched in and donated money to give the family gift cards to replace their stolen goods from inside the car.

“We were really grateful, but it was really overwhelming at the same time,” Matt Stahl said. “It was already too much that they had given us a car.”

The couple said they work hard to provide for their family and try to be nice to others they come across, but this inspires them to pay it forward even more into the future.

“It makes you believe in miracles,” Matt Stahl said. “It’s a nice feeling.”