John Moen of Boyd  passed away Wednesday, Jan. 1, 2020, at the Veterans Affairs Hospital in Minneapolis at the age of 74. 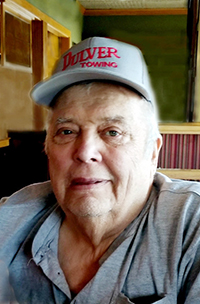 Funeral services will be tat 1 p.m. Wednesday at Trinity Lutheran Church of Boyd with the Rev. Lori Wold officiating.  Visitation will be from 5 to 7 p.m. Tuesday at Anderson-TeBeest Funeral Home in Montevideo with a prayer service at 6:45 p.m.

John Raymond Moen was born Nov. 21, 1945, in Granite Falls to Raymond and Bette (Mills) Moen. The family lived in Albert Lea, where John attended school. He entered and served in the United States Marines.

He met and  married the love of his life, Clarice (Siemer) Moen, on Aug. 28, 1965, at  St. Theodore Catholic Church in Albert Lea. He  worked alongside Clarice at her sister’s  Mrs. Gerry’s Salads in  Albert Lea. John and Clarice started a family in Albert Lea. The family moved to Tenstrike, where John purchased his dream, Birch Haven Campground. They together owned and operated the campground for 20 years.

On Nov. 1, 2006, John lost the love of his life to cancer. Following her death he then moved to southwestern Minnesota, where he worked with his brother, Mike, for a couple of years. In 2009 he met the second love of his life, Sylvia Bendickson, and moved to Boyd, where they shared 11 wonderful years together.

John enjoyed fishing and going to the casino, and his every-morning game of cards with his best buddy, “Sparky.” He also looked forward to his morning phone call from Lonny. John had a great sense of humor and was very quick-witted. He lived for his trips to Tenstrike to spend the summer fishing and relaxing with his kids and grandchildren at the campground.

He was preceded in death by his parents; his wife, Clarice, in 2006; son, Lonny, in 2017; and siblings Jackie in infancy, Jerry, Butch and Randy.