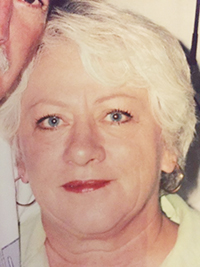 Shortly after high school she married Keith Nelson, who also grew up in Twin Lakes, and had one daughter. Divorced after three years of marriage, Julene’s main occupation was as a graphic artist. In Albert Lea she worked for the Shopper. In 1985 she was offered a job in Madison, Wisconsin, for a subsidiary of the Shopper. She then worked for Madison Newspapers and retired from Madison Newspapers.

She married Grant Backey in 2005, who was a long-time companion and friend. Both enjoyed a spirited sense of humor.

During the time she lived in Albert Lea, Julene played on many leagues for softball from 1972 to 1984. She loved her teammates and talked about them often. There is still a special bond between some of them to this day. Julene had a very free spirit and you never had to worry where you stood with her; she laughed often and had a wonderful sense of humor.

Julene is proceeded in death by her husband, Grant Backey; her father, Lawrence Wilhelm; and mother, Helen (Korakas) Wilhelm.

She is survived by her daughter, Tammi Nelson, and Chris Nelson and granddaughter, Samantha Nelson, of Emmett, Idaho; her stepson, Kane Backey, of Madison; her sister, Lauryne (Wilhelm) Stern, and Jim Stern of Wells; her brother, Larry Wilhelm, and Debbie (LeBrash) Wilhelm; and her sister, Pauline (Wilhelm) Asbill, and Scott Asbill.

A memorial and celebration of life will be organized and held in the summer of 2020. All are invited to attend and the family will share information with all friends and relatives. A special appreciation is dedicated to the staff at Parkside Nursing Home and her sister, Lauryne, and daughter, Tammi, who took great care for Julene.