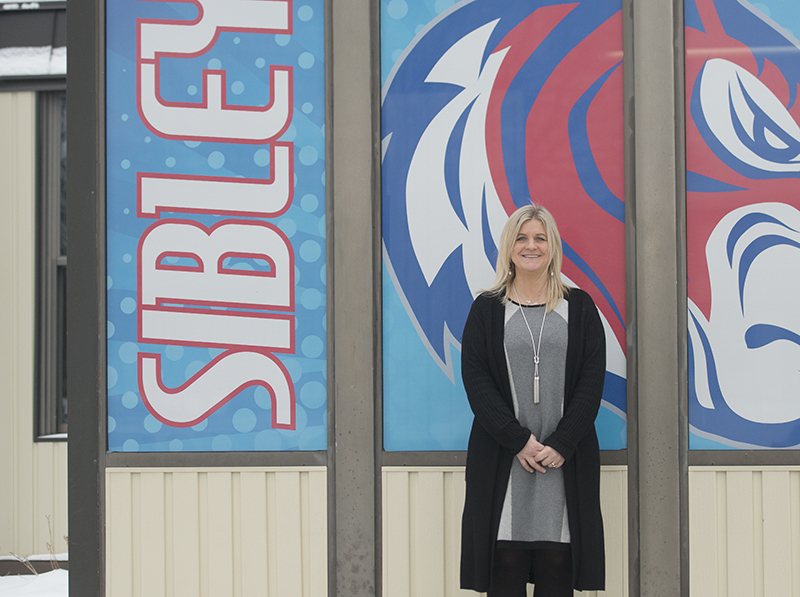 Nicky Severtson recently took on the role of principal at Sibley Elementary School after spending time in a handful of other positions in the school district. - Tyler Julson/Albert Lea Tribune

Starting this month, Nicky Severtson has taken on the new role of principal at Sibley Elementary School.

An Albert Lea graduate, Severtson has spent time in many different roles within the school district. Severtson taught elementary school in Austin for three years before making the jump back to Albert Lea. She spent time as a special education teacher at Southwest Middle School and as a second-grade teacher at Hawthorne Elementary School for 13 years.

While at Hawthorne, Severtson decided to go back to school at the University of Minnesota and Minnesota State University-Mankato to get her master’s degree in curriculum and instruction and a specialist degree in administration. She went on to be principal at the Area Learning Center for three years, the high school as assistant principal and finally at Southwest as the assistant principal before landing at Sibley.

Severtson said she knew she always wanted to step into the head principal role. She talked about differences she has noticed in her transition.

Severtson said the most challenging aspect about being a principal will be prioritizing what needs to get done first. She said she wants to jump in and get everything done right away, but will need to prioritize well to get her goals completed efficiently. Despite some small challenges, Severtson said she loves her job.

“All ages have their pluses,” Severtson said. “There’s awesome things about each and every different age level and there’s challenges at each and every level, and I just enjoy all of it.

“It’s about the kids. Everyday with the kids and seeing the big smiles on their faces. When you’re in a classroom and they’re learning or they want to read to you. Or it’s the teachers coming in and sharing their success stories with you and how excited they are. Those are huge.”

When not working, Severtson said she loves watching her two boys play hockey. She said they have been playing since they were 3. She also likes reading professional books to grow in her career. As a family, Severtson said they like to camp and spend time out in their boat on the lake.

Interesting fact: during college, Severtson spent her summer as a nanny in New York City