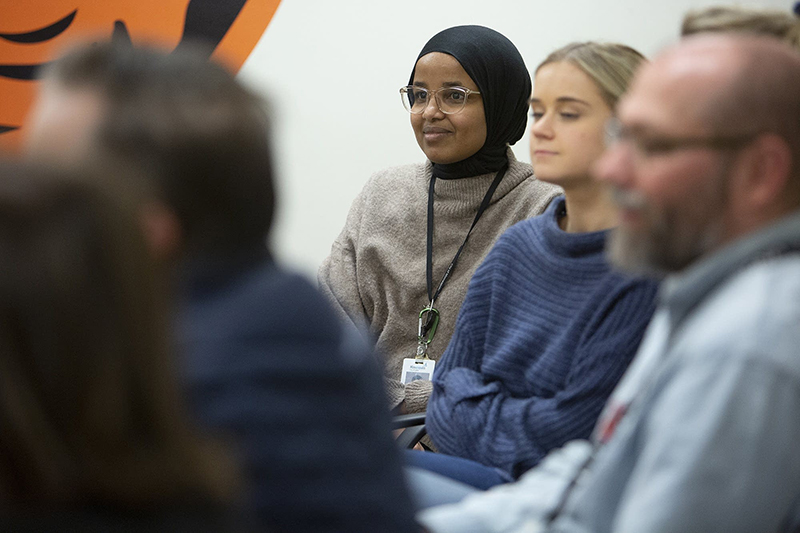 Farah Hussein, a therapist at South High School, attends a collaborative mental health meeting at the school in December. The meetings include the school’s social workers, counselors, nurses and psychologists. A Minneapolis Public Schools program places therapists in schools so students in need can more easily make their appointments. - Christine T. Nguyen/MPR News

When Cathy Moen’s son, Elijah, was in first grade, he was diagnosed with attention deficit hyperactivity disorder. She took him to the pediatrician, who put him on medication and suggested therapy.

The medication part was easy. But getting him therapy proved more difficult — not because Moen couldn’t find a therapist or didn’t have insurance, but because of logistics.

The appointments were always during the day, and between her work schedule and the traffic, it was nearly impossible for them to make it.

But she soon learned Elijah was able to see a therapist in his Bloomington school. More than 15 years ago, Minneapolis Public Schools helped pioneer a national model of bringing community mental health care directly to its students. Today, most of the public schools in Minneapolis — more than 50 of them — have a therapist on site, and many other districts, like Elijah’s, have followed suit.

These days, Elijah’s therapist simply walks down the hall and pulls him from class.

The family’s health insurance pays for the care the same way it would if the student were being seen in the clinic. The school program was designed so that no student in need will be turned away for lack of insurance.

The Minneapolis program has also provided a road map for schools across the country as more administrators realize that mental health is as important to students’ future success as academics. Studies have shown that students are more likely to show up for appointments when the therapists are on-site.

More and more states are making mental health care in schools a priority. At least two states have recently passed laws that require schools to teach mental health. And more are considering it.

But the benefit of having a therapist on-site goes beyond just getting students to see a therapist. In Minneapolis, it’s also helped make mental health a school-wide priority — and helped get counselors, teachers and others more involved, said Mark Sander, who helped start the district program.

“Those teachers start learning more and more [about mental health],” said Sander, who directs school mental health for the district and the county.

He said as they learn more about mental health, teachers are feeling like, “‘OK, I get it. And now, you know, I’ve got this other student who’s not diagnosed with anxiety but has some of those anxiety features. And now I know how to better support them.”

At South High School in Minneapolis, the therapists sit in the school clinic, the same one where students go if they feel sick during the day or to get a physical so they can play sports.

The issues the students bring to the therapist run the gamut from stress about grades and colleges to anxiety related to a bad situation at home.

Farah Hussein is a therapist at South. She said it’s hard being a teenager, and she tries to help.

“There’s a lot of conversations about, ‘Who am I? Where do I fit in the world? Where do I belong?’ and just a lot of distress in exploring that,” she said.

All of this has important implications for the students’ well-being beyond just their mental health.

Sharon Hoover, who co-directs the National Center for School Mental Health at the University of Maryland School of Medicine, said more schools are collecting data on outcomes of in-school mental health programs, and the results are clear.

“They are more likely to have good attendance and to graduate and to get improved grades. We even have documentation of having better standardized test scores when you put universal systems in place like classroom-wide social emotional learning,” she said, all of which makes for happier, better adjusted students.

Cathy Moen, the mother whose son, Elijah, is in therapy in school, said she doesn’t know if it’s the medicine, or the therapy, or just that he’s growing up, but she — and his teachers — are already seeing a difference.