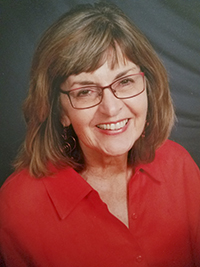 Becky was born to Carlyle and Arlene (Buchanan) Olson in Albert Lea.  She worked at her family gas station and grocery store as a young girl.

After graduating from Glenville High School, Becky went to college at Mankato State University in Mankato, where she earned her bachelor’s degree in education.  Once she completed her college degree, she married her high school sweetheart, Paul Schilling.

Becky later returned to Mankato State University, where she was awarded a graduate degree in rehabilitation counseling.

Becky held many different jobs throughout her work life in the areas of education and counseling.  It was when she and Paul relocated from an acreage in Hanska to Worthington that she became determined to follow her dreams and began her own business doing what she knew and loved best: cooking, drinking coffee and hosting.  Becky opened The Coffee Nook in Worthington in 1998 and became an active member of the Chamber of Commerce in Worthington.  In 2004 she was awarded the Athena Award for inspiring others to achieve excellence in their professional and personal lives.

This past March, Becky and Paul celebrated their 50th wedding anniversary while wintering in Florida.  Becky loved the sunshine and day trips she would take with Paul and their friends and family in Florida.

Becky was preceded in death by her parents Carlyle and Arlene Olson; her grandparents Emma and Otto Olson and Mable and S. Ross Buchanan; and her sister-in-law, Donna Olson.