Revised insulin bill to get swift consideration in Minnesota House 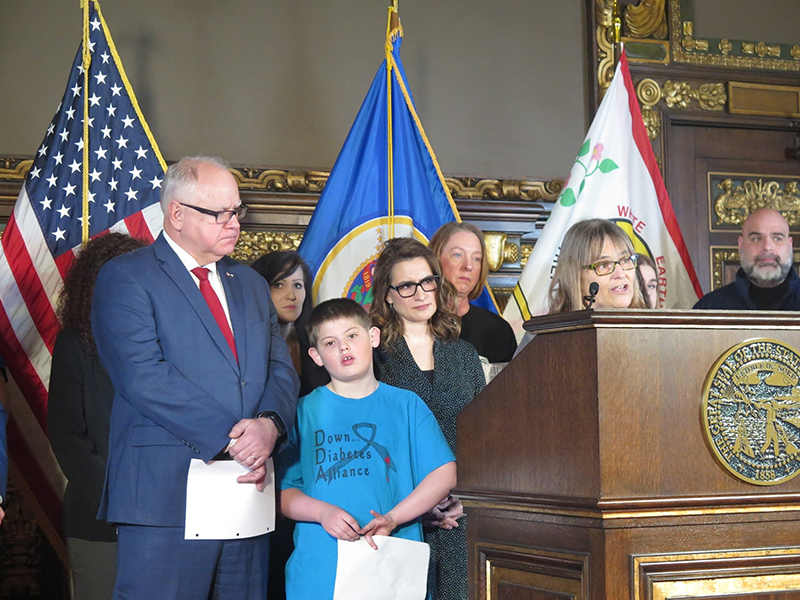 From a boy adjusting to his diabetes to a woman who has coped with the disease for three decades, insulin affordability advocates joined top Democratic lawmakers on Thursday in pressing for approval of assistance programs that would be paid for by drugmakers.

Their personal stories came with political prodding for the Legislature to take quick action when lawmakers return to the Capitol in mid-February.

Thursday’s press conference follows months of unsuccessful negotiations between Democrats and Republicans to work out a deal. Those talks have been hung up by differences over who would be eligible, who would administer the program and, most importantly, who pays.

Annette Gentile, who has had Type 1 diabetes for 32 years, said insulin costs consume three-fourths of her monthly income.

“There are times I haven’t bought food. I haven’t bought gas. I would skip buying my heart, depression and other medications that I need because I need to buy my insulin, so I can live,” she said, describing bouts with hospitalization that resulted from rationing.

“I know there are others in the same situation as I am: Embarrassed to tell their friends and families that they can’t afford their life-saving insulin. Instead, they ration it and put their lives at risk every day,” Gentile said.

She was followed at the podium in Gov. Tim Walz’s office by Jett Loewy, a 9-year-old who has taken daily insulin for three years.

“I am worried about what will happen to me when I become an adult and need to pay for my own insulin because I know it is so expensive,” he said, getting a fist-bump from Walz.

The DFL governor said lawmakers need to step in to address a “market failure” that has priced some people with diabetes out of their medication.

“We need action and we need it now,” Walz said, adding, “Lives are on the line. A solution is on the table.”

The bill from Rep. Michael Howard, DFL-Richfield, would establish an emergency insulin access program and provide long-term help for people struggling to cope with their diabetes. The state would pay $1 million to set up the system and administer it, but drug manufacturers would be assessed an as-yet-determined fee to cover ongoing medication costs.

Howard challenged Republicans to get on board.

“Whose side are you on? Minnesotans who can’t afford the crushing costs of their insulin or the drug manufacturers that have profited richly as they’ve jacked up the prices higher and higher and higher,” he said.

The House DFL proposal would require recipients to have a valid prescription and meet eligibility requirements, which could include income and out-of-pocket medication burdens.

Republican lawmakers have also been tweaking their insulin bill. One they put out this fall relied on drug companies giving physicians insulin at no cost. Doctors would then distribute the drug to patients who don’t exceed income limits.

Their latest plan would also enable patients to receive a 30-day supply of insulin at a pharmacy if they pay a $75 copay. That emergency supply would be available once per year, but there are pathways for people to get more sustained help.

Senate Majority Leader Paul Gazelka, R-Nisswa, said in a written statement that his side is willing to work with anyone “who truly wants to be a problem-solver to get this done.”

Sen. Eric Pratt, R-Prior Lake, has been involved in the behind-the-scenes negotiations. He said he hasn’t seen the details of the DFL’s latest proposal. He said Republicans are drafting a bill they plan to move through the Senate. He pushed back at the notion that his party isn’t being tough enough on drugmakers.

“We’ve always said manufacturers should have a financial stake in this,” he said. “Today was a disappointment in the political tone that was raised and the accusations that were made. We worked genuinely hard to try to find a compromise.”